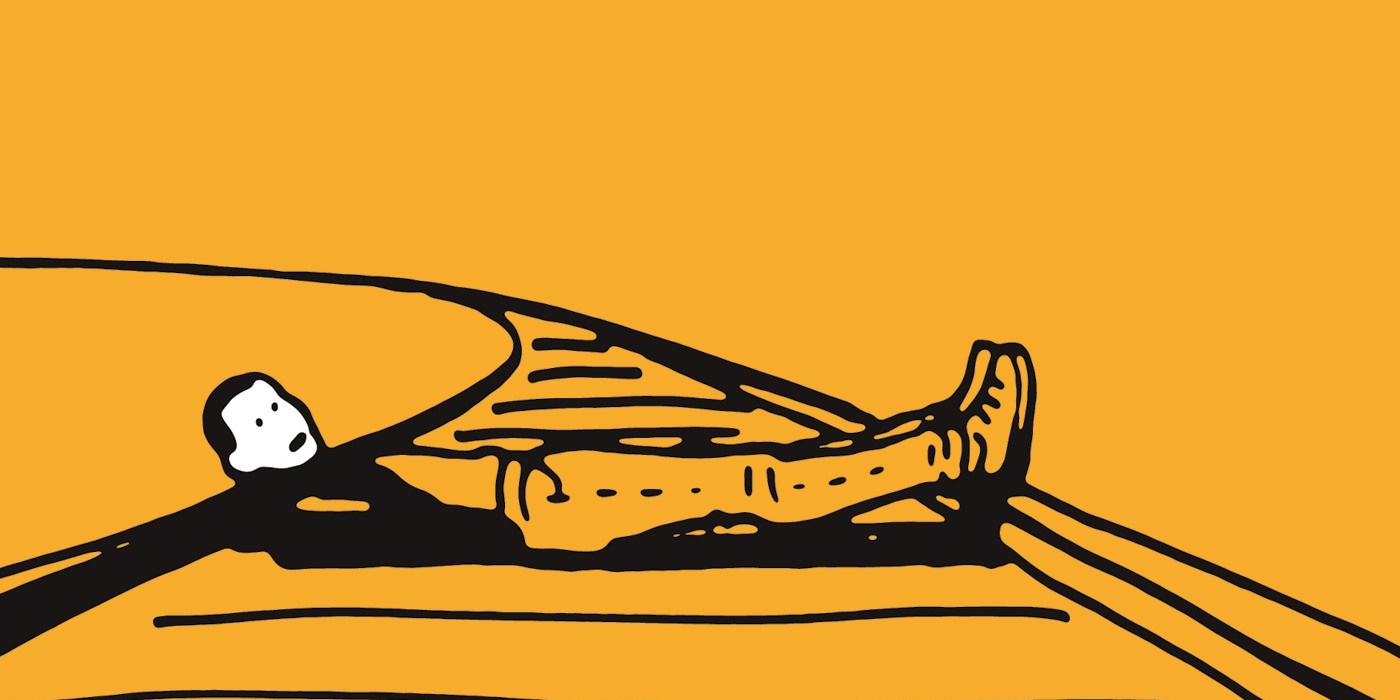 Irvine Welsh’s darkly comic 1993 novel, Trainspotting, was a literary sensation, delivering a candid, warts-and-all view into the life of a group of heroin addicts in the run-down Leith neighbourhood of the Scottish capital, Edinburgh.

You’ll find here my Trainspotting book character analysis, but please feel free to give yours in the comment box below…

The novel was originally nominated for the Man Booker prize, though it was ultimately discounted from the candidates for “offending the sensibilities” of some of the judges.

And indeed, the book does contain a string of vulgar words and scenes, and reads less like a linear novel than a ragtag collection of stories about these immoral and depraved misfits.

It is also a challenging read, not only because of its unpleasant (and at times harrowing) subject matter, but also the Scots dialect employed in its narration.

“offending the sensibilities” of some of the judges

Underneath this veneer, however, of slang, obscenities and drug-taking, lies a cleverly-constructed, thoughtful, moving and, in parts, genuinely hilarious novel.

And how does Welsh achieve this effect?

In Trainspotting, character descriptions are not spoon-fed to the reader, with certain figures held up as paragons of virtue and others as agents of the devil.

Instead, the reader is encouraged to make up their own mind about each individual, based on their thoughts and actions in relation to the situations they face.

Such an enjoyable and important read

Even the most despicable of Welsh’s creations elicit some level of sympathy from the reader and often an ability to share in the dark, dark humour of the whole situation.

It is precisely these finely-crafted characters which demonstrate Welsh’s mastery and make Trainspotting such an enjoyable and important read.

The main character of the novel.

A typical anti-hero, Renton displays many traits the reader may be able to recognise in themselves and balances a cynical eye and black humour with a debilitating loneliness, alienation and depression with the world around him, manifested most clearly in his drug problem.

His final act of ripping off his friends displays a more callous and uncaring side to Renton, redeemed slightly by his decision to recompense Spud.

Simon “Sick Boy” Williamson:
Sick Boy shares a very old and close relationship with Renton, which often betrays more a sense of competition than of affection.

Italian by descent, suave by nature, and utterly morally bankrupt by choice, Sick Boy generally sees himself as better than everyone around him, especially women, whom he finds incredibly easy to seduce, manipulate and abuse.

His superiority complex is manifested in his self-involved conversations (with himself), in which he pretends to be talking to Sean Connery.

His moral degradation is complete by the end of the novel, when he has descended so low as to become a pimp for underage and unwilling girls, using drugs and his charisma to control them.

In many ways, Spud is the most innocent and childlike of the entire group.

Though he is heavily addicted to heroin and pursues criminal means to sustain his habit, he is generally thoughtful, considerate, and respectful of others, whom he often affectionately refers to as “cats”.

His gentler nature often makes him the source of ridicule among his peers, and is nowhere more apparent than in his defence of a harmless squirrel which Renton and Sick Boy are attempting to kill for no other reason than their own amusement.

He can be seen as a direct moral counterpoint to Sick Boy.

Though Sick Boy commits the occasional act of ostensible generosity, he is invariably acting out of self-interest.

Spud, on the other hand, may be prone to selfish actions, yet this is rooted in his drug addiction and is not demonstrative of his personality.

If Sick Boy is a counterpoint to Spud, Begbie is a far more extreme one. Less than calculating than Sick Boy, Begbie more than makes up for this with his penchant for brutal (and often senseless) violence.

Kill for no other reason than their own amusement

A truly terrifying character, Begbie bullies all of his so-called “mates” into the latest plan he has hatched and forces them to be unwilling accomplices in his frequent rampages.

His taste for violence is demonstrated throughout the novel, but is shown more clearly than elsewhere in the scene where he casually tosses a pint glass from a mezzanine level in a busy bar, before inciting a riot in an alleged attempt to find the culprit, all because he wanted to pick a fight with a stranger whose face he had taken a disliking to.

At the outset of the novel, Tommy is probably the most normal of all of the boys.

He plays sports, has a steady girlfriend, likes socialising with alcohol and the occasional drug bender, but most importantly, does not use heroin.

However, as the novel progresses, Tommy’s seemingly perfect life begins to unravel, largely due to the actions and influences of his wayward friends.

After being dumped by his girlfriend (a row instigated in part by Renton – albeit unknowingly), Tommy asks Renton to let him try heroin; Renton reluctantly agrees.

Socialising with alcohol and the occasional drug bender

From this point onwards, Tommy’s life becomes a downward spiral, ending in his diagnosis with HIV and eventual death.

He is a symbol of what can happen to a functional member of society once they become embroiled in the murky underworld of drug addiction, and elicits much regret and guilt in Renton.

So named for his habit of picking fights (and losing them) whilst intoxicated, Rab is a former promising football starlet whose career was ruined by alcoholism.

Rab’s constant battle with the bottle mirrors the others’ dalliance with heroin and highlights the other social problems facing contemporary Scotland: namely, alcoholism.

Diane: a 14-year-old schoolgirl who Renton picks up in a nightclub and sleeps with, oblivious of her age.

He endures an awkward breakfast in the company of her parents the morning after.

A member of the wider group of friends who has casual sex with Renton.

She displays strong feminist attitudes (with the New Zealand lesbians and in her job as a waitress) and weak vulnerabilities (in her reaction to the prank call in the bar) in equal amounts.

Alison: A minor character who also indulges in drug-taking and drinking.

Another heroin user whose baby dies, either due to cot death or neglect.

Though it is never explicitly stated, it is heavily suggested that Sick Boy is the father by his reaction to the death.

Another minor character, Nina is Renton’s cousin and only appears twice. The second time, he makes a half-heartened attempt to seduce her.

The girlfriend of Renton’s deceased brother Billy, who Renton has sex with in the toilets during the wake after his brother’s funeral.

Two lesbians from New Zealand who appear fleetingly when they meet Alison and Kelly on a night out and discuss the various flaws of males.

They later feel bad after ganging up on Renton, who visits them.

Woman who is publicly and physically abused by her boyfriend, but who defends him when Tommy tries to stop the violence.

As you can see, there are not too many female characters in the story; Trainspotting is certainly more a story about young men than women.

Indeed, not one of the female characters has a surname, and in the case of the last example, doesn’t even have a name at all.

They are most commonly discussed in their relation to men, and, in the last example, explicitly exist to justify the immoral and unpardonable actions of their boyfriends.

Though Dianne is a strong teenager who forces Renton to see her despite his misgivings about her age, and others females display strong traits (such as when the lesbians and Alison and Kelly trash talk males, or when Kelly gets revenge on an obnoxious customer), they are ultimately defined by their relationship with men.

In fact, Kelly sums up the female attitude toward men in the book: “when they’re in the f*cking minority thir okay”. By extension, she is revealing how the females are treated throughout the book.

The innovative narrative technique of switching between perspectives allows us to see into the mindsets of several different characters.

The occasionally used third person perspective is employed excellently to provide insights into the opinions of multiple characters, about themselves and about others.

The fact that only two of the chapters are narrated by a female (both by Kelly) show how little impact and import women have in this largely-male-centric story; a point emphasised by the irrelevance to the greater storyline of both chapters.

It is these techniques, along with the unflinching honest account of the flaws of each of the characters, which makes Trainspotting such an engaging and interesting read and ensures it places among the greats of the Scottish literary canon.

Each of the characters has their own unique appeal, despite all of their manifold flaws.

Begbie, for all his terrifying and unreasoning fury, retains a sort of macabre fascination for the reader, like watching a horror film or a horrific disaster.

Having said that, his barbaric nature makes him impossible to single out as a favourite, even though he is an enthralling literary creation.

He is a despicable man, completely uninterested and unaffected by the feelings of others and motivated only by his own agenda and his sex drive.

However, the same charisma which draws women to him also holds a kind of magnetism for the reader; he is, at times, brilliantly funny in his observations and jokes at the expense of others.

His humanity is also exposed in his reaction to baby Dawn’s death, betraying the existence of a soul beneath the façade of selfishness and self-satisfaction.

Though far from a role model, he is such an interesting character to read because he keeps the reader guessing what he will do next.

Despite not knowing what he’ll do, we certainly know why he’ll do it: for no-one other than himself.

Which is your favourite character?

There is something to interest and engage the reader in all of them; which one grabs your attention the most?

If you not only liked the book but also the movie, check out Roxanne’s article for more films similar to Trainspotting.