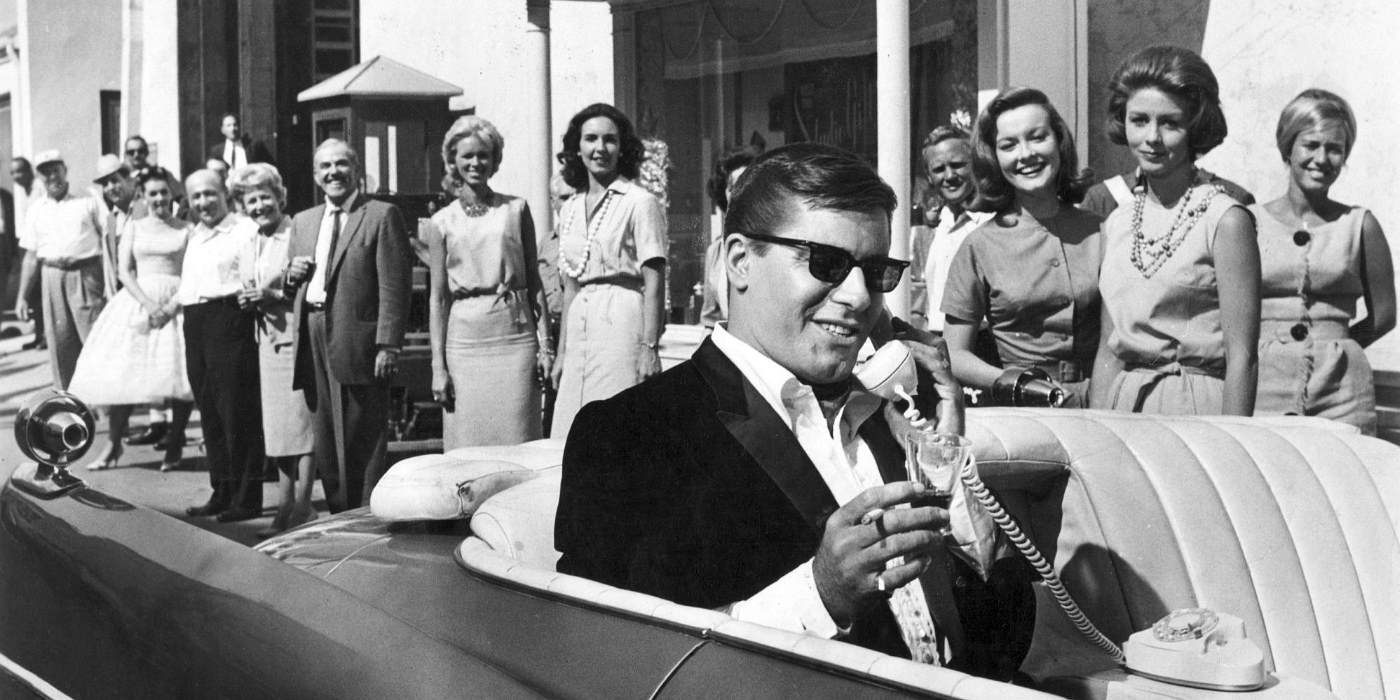 Joseph Levitch aka Jerry Lewis was born between the two World Wars in 1926, and I’m gonna give you my Top 5 Jerry Lewis movies. ~ Paola Bassanese

I, personally, find it very interesting that as a young man, Jerry Lewis lived through the Second World War, and yet, he decided to make comedy his future career.

Many critics have hastily dismissed his type of comedy as silly and slapstick, but if you take the time to do more research, you’ll find that Lewis‘ movies are carefully planned and have plenty of cultural references.

Looking through vintage and more recent interviews, I learned that Lewis was an astute and hard-working writer and director. He starred in 71 movies (his most recent are the 2013 productions Till Luck Do Us Part 2 and Max Rose at the tender age of 87)  and directed 22 films.

He has always been completely in control of his work; he also distanced himself in interviews from his funnyman public persona.

This below is the original 1955 trailer.

To me, this is the best Jerry Lewis film because it features my favourite actors: Jerry Lewis, Dean Martin and Shirley MacLaine.

To me this is the best Jerry Lewis

There are also so many cinema genres all mixed together, many pop culture references (comic books in particular) and brilliant singing and dancing.

The 1963 trailer warns not to reveal the middle bit of the movie: what will a nerdy chemistry professor become through his mad experiments?

Based on the Strange Case of Dr Jekyll and Mr Hyde by Robert Louis Stevenson, The Nutty Professor is a modern take on split personality with special effects that were rather revolutionary at the time.

Released in 1960, Cinderfella is a parody of the fairytale Cinderella with a role reversal: Lewis plays the prince who lives with an evil stepmother and her two sons.

At a ball organised for Princess Charming, Cinderfella dances with the princess, loses a shoe and she starts a quest to find him.

The Count Basie Orchestra provides the musical accompaniment at the ball.

This is the original trailer:

As the original 1956 film trailer says, “there’s fighting, and dancing, and shootin’”.

A comedy of errors with Lewis playing a goofy sheriff and Dean Martin playing the main romantic lead.

Released in 1958, this film is sentimental in all the right places.

Lewis plays a magician working in Japan who becomes close to an orphan boy and his mother.

Although there are plenty of laughs in The Geisha Boy, this is a delicate and sensitive film that highlights Lewis’ ability to carry a scene as a more serious actor.

With 71 movies to choose from, it is a huge challenge to choose only a handful of best moments.

At the start of his career, Lewis was acerbic, with a high-pitched voice and always playing goofy characters next to the dashing Dean Martin.

As a director and actor in his own movies, he portrayed more multi-faceted characters but still retained plenty of elements from physical comedy.

From the clips I selected you can also see he was a good dancer and an athlete to be able to perform energetic stunts and dance routines.

There’s a lot of musical references in his movies, let’s have a look:

In this scene, Jerry pretends he’s the big boss, ordering people around to the tune of Song is Blues in Hoss Flat.

Unfortunately, after this dance scene, Lewis was taken to hospital for a cardiac arrest.

Jerry comes in for a job interview and is asked to wait by the secretary in personnel.

She types rhythmically on the typewriter; Jerry is seduced by the sound and mimics her with a pretend typewriter to the sound of Leroy Anderson‘s 1950 music, The Typewriter.

The comedy value of this scene lies in the perfect timing and hilarious facial expressions.

If any actor other than Lewis were to star in the scene, it would be all about a game of seduction.

But when a bespectacled, nerdy-looking Jerry enters a surreal, all-white room and an all-black wearing spider-like femme fatal appears, the ensuing dance between the two reaches new heights of comedic genius.

Musical accompaniment is provided by Harry James and his band.

Taken from one of my favourite Jerry Lewis’ films, this scene features Jerry Lewis, Dean Martin and Shirley MacLaine.

Shirley MacLaine plays a model for a comic book artist and wears a Bat Lady costume.

Jerry sees her and goes into overdrive with fantastic comedic consequences.

This is just a small selection of funny scenes from the best Lewis films.

What are your all-time favourite scenes? Which one of his movies brings back those special memories?

Don’t forget to have your say in the comments.

I think I’ll celebrate my birthday watching one of his films.