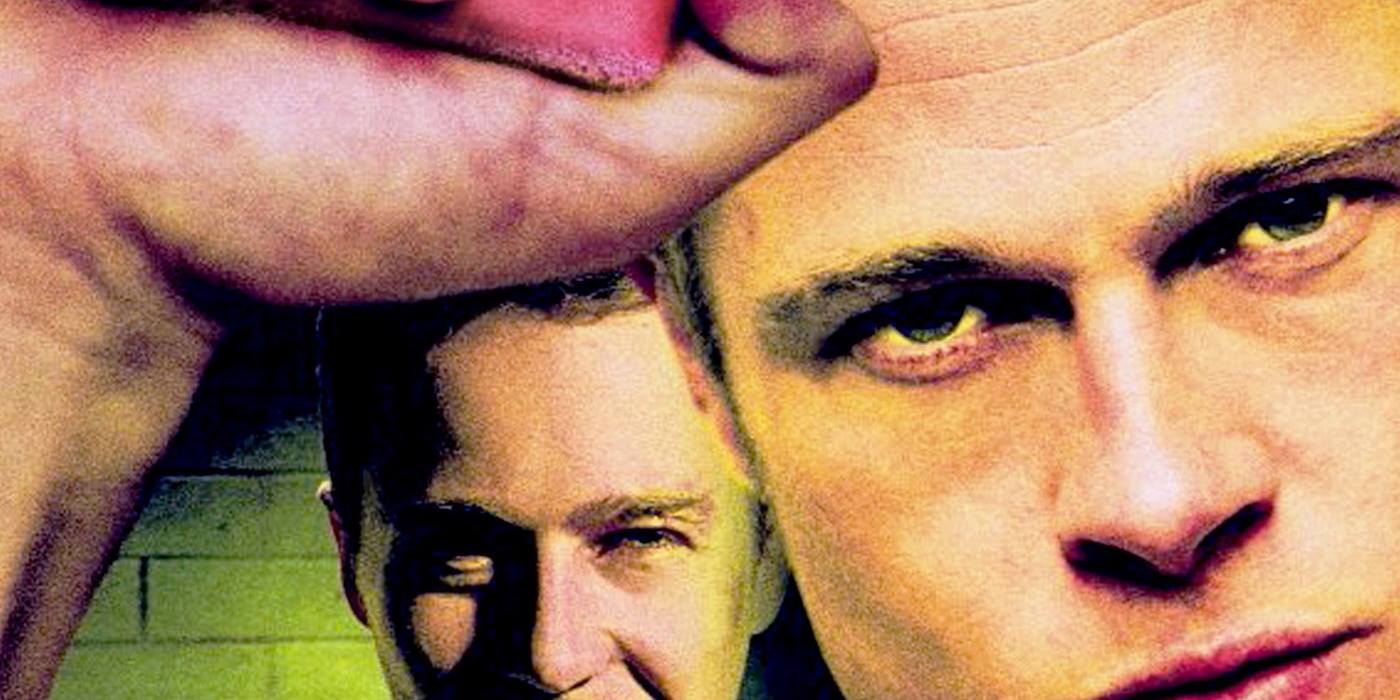 If you had to watch David Fincher’s Fight Club twice before really getting it, don’t worry – you weren’t the only one. All the best movies need to be seen a few times before we are able to fully process all the information. For more movies like ‘Fight Club’, check out ‘The Anarchist Cookbook’ and ‘Into The Wild’ amongst others.~ Roxanne Sancto

Sometimes, You Have to Watch Films More than Once

Have you ever heard of anyone who watched ‘Fight Club’ once and immediately got it?My point exactly.

There are, however, some similar films and even though they aren’t quite as challenging, I promise you they’re just as good!

Narrated by protagonist Puck (Devon Gummersall), director Jordan Susman’s 2002 The Anarchist Cookbook opens with the underlying philosophy of this film.

Puck decides to leave Sam for a while when he meets a girl who doesn’t exactly match his life style and beliefs. Feeling conflicted and insecure, he decides to follow a different direction by getting a job.

Cooperate life doesn’t sit well with Puck either and he decides to return to The Family. During the course of his absence, Johnny Black seems to have taken over and the group have formed alliances with neo Nazis.

This is one of those great films to watch if you like Fight Club; The Anarchist Cookbook is yet another example of a project with initial good intentions, led astray by someone with violent ideals.

In ‘Fight Club’, Tyler Durden stands up against a consumer orientated system he loathes. In the 2000 hit movie ‘American Psycho’, protagonist Patrick Bateman is painfully aware of the brain-washed society he has become a part of but cannot resist it. Instead, he lives out his frustrations of being trapped in a life he loathes by committing horrendous murders.

Bateman’s life revolves around designer clothes, luxurious décor and classy business cards. It’s all about who’s got the bigger, better, most expensive goods and Bateman seems more than content to be living under these pressures – but not without a violent outlet for his aggravations….

SIMILARITY MATCH: 70%
‘American Psycho’ indirectly disses a world based on consumerism, whereas films like ‘Fight Club’ addresses its flaws full on.
***
‘The Beach’ (Danny Boyle, 2000)

Richard (Leonardo DiCaprio) is a passionate traveller who has just landed in Bangkok. Here he meets Daffy (Robert Carlyle), a mad Scotsman who tells him fantastical tales of a secret island inhabited by a group of backpackers. The next day, Richard finds Daffy has committed suicide; but he did leave a map to the island.

On his way to find the mysterious island, he meets the French couple Etienne (Guillaume Canet) and Francoise (Virginie Ledoyen) and invites them along. Their journey does not come without its dangers: They have to swim a far stretch to reach the island and once they arrive, are confronted with the guards of a marijuana plantation.

When they finally reach the beach of the island, they feel as though they have stumbled upon a utopian ideal: Around thirty backpackers living together in harmony, feeding off of the fruits of the land and the catch of the day. But can they turn their fantasy world into a full-time reality?

SIMILARITY MATCH: 50%
‘Fight Club’ and ‘The Beach’ are similar in that both protagonists are in search of their own Utopia but the worlds depicted in both films are very different.
***
‘Into the Wild’ (Sean Penn, 2007)

Films with similar themes to Fight Club aren’t easy to find, but we can definitely include Into the Wild (Sean Penn, 2007) in this article.

The film may not be as much as a mindf*ck but the films do have one big thing in common: they both deal with characters who feel overwhelmed and corrupted by consumerism.

Based on the real story of Jan Krakauer, Into the Wild follows Christopher McCandless (Emile Hirsch) on his travels through North America. He finally settles in the Alaskan wilderness.

After graduating university, McCandless rids himself of most of his material possessions, including his credit cards and ID. He donates a whopping $ 24, 000 to charity and sets off to travel.

The films’ soundtrack is performed by Pearl Jam’s Eddie Vedder and really encapsulates the feeling of freedom. But will the freedom last through strong weather?

‘Into the Wild’ is anarchy in its purest form.

SIMILARITY MATCH: 50%
Both ‘Fight Club’ and ‘Into the Wild’ deal with protagonists who are no longer happy to be a part of a system they do not believe in, but whereas ‘Fight Club’ is fast paced and fictional, ‘Into the Wild’ is calm and based on a true story.
***
‘The Cabinet of Dr. Caligari’, (Robert Wiene, 1920)

Francis (Friedrich Feher) and Alan (Hans Heinrich von Twardowski) live in an eerie town made up of strange buildings and spiralling streets. They are both interested in Jane (Lil Dagover) and hope to woe her at the upcoming town fair.

On the night of the fair, Francis and Alan find themselves spellbound by a new spectacle – Dr. Caligari (Werner Krauss) and Cesare, his somnambulist (Conrad Veidt) who answers random questions from the audience. When Alan risks the question “How long will I live”, he is shocked to hear Cesare’s reply: “Until dawn”.

Following the brutal murder of his friend Alan, Francis sets out to follow Dr. Caligari, convinced that he is the culprit. But his search leads him back to a mental asylum of which Caligari seems to be the director. As Francis is put into a straitjacket, it becomes clear that he has always been an asylum inmate and the characters of the above mentioned stories merely exist in his own mind.

‘Fight Club’ introduces a strong sense of anarchy in a world already suffocating at the hands of consumerism; the mission is clear as are the statements. But there are other films like ‘Fight Club’, that touch upon our society and its constant pressures in a more subtle manner. Here are two:

‘Choke’ is a dark comedy that stems from the same twisted mind as ‘Fight Club’. Writer Chuck Palahniuk has a true knack for exploring extreme characters in obscure situations. Director Clark Gregg managed to adapt Palahniuk’s ‘Choke’ for the screens in a manner even the original author approved of.

Victor Mancini (Sam Rockwell) doesn’t have it easy. He’s a recovering sex addict who barely makes ends meet as a reenactor of life in Colonial America. In order to top up his salary, he feigns choking in restaurants. His rescuers tend to feel a responsibility towards him afterwards which he uses to his full financial advantage.

But he has a good reason to be pulling off such scams: His mother Ida (Anjelica Huston) is hospitalized with Alzheimer’s disease and the costs are running high. When Victor finds out that his whole existence is based on his mother’s lies, his goodwill comes to an end…

‘Choke’ was written by the same author as ‘Fight Club’. Although it differs in its themes, a definite Palahniuk-flair can be noted.
***
‘Persona’ (Ingmar Bergman, 1966)

Ingmar Bergman’s ‘Persona’ is considered to be one of the great cinematic masterpieces of the twentieth century. It details the story of the actress Elisabet Vogler (Liv Ullmann) who has fallen into a catatonic state and no longer communicates, and the young nurse Alma (Bibi Andersson) who is assigned her case.

In order for Elisabet to recuperate fully, a hospital administrator offers Alma to use her house by the seaside. The seaside environment and the quiet cottage seem to soothe Elisabet; although she is still not speaking she seems to have found relaxation.

Frustrated by the silence, Alma chatters insistently and begins to share intimate details of her own life with Elisabeth. She shares her thoughts on aborting her unborn child and her husband who seems to have taken issue with her dismissal of motherhood. Essentially, this film is based on an unspoken dialogue regarding various emotional factors of gender roles and the pressures thereof.

…about films like ‘Fight Club’, is you talk about them!

The second rule:Tell itcher about them!!