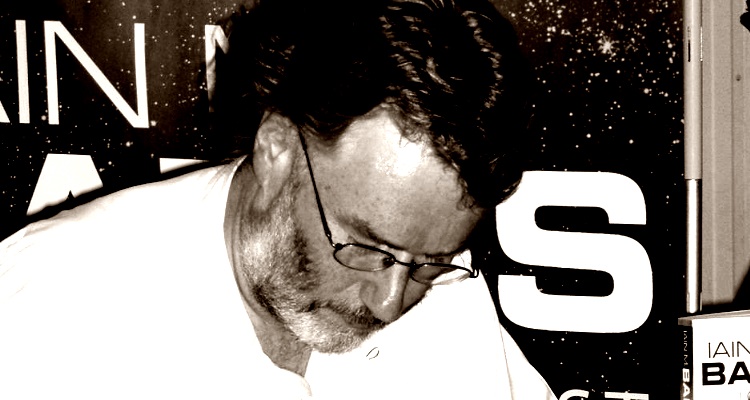 If you like Iain Banks‘ novels, chances are you’ll like the work of at least one of his compatriots: Alasdair Gray, Christopher Brookmyre, Irvine Welsh, James Kelman or Ian Rankin. ~ Jonny Sweet

As mentioned in another article, Banks’ style is so diverse and far-reaching that there are legions of fans, many of whom will adore him for completely different reasons.

Some will love his surrealism; others his wit; some his gritty subject matter; others his portrayal of Scottish life; whilst some simply may enjoy his ability to spin a good yarn, whether it be about crime, family or fantasy.

In this article I will attempt to highlight some of my favourite similar authors to Iain Banks, and also point out the way in which each one is particularly similar to the sorely missed Scotsman.

Alasdair Gray’s epic 1981 novel Lanark is, in my opinion, superior to anything Banks managed in his writing career, illustrious thought it was.

The two share certain stylistic similarities, such as a relaxed narrative, focus on a Scottish setting and characters, elements of the surreal, and thinly-veiled political jibes.

Although Gray is nowhere near as prolific as Banks, another of Gray’s works, Poor Things, also outranks most of Banks’ work in my eyes. If you haven’t sampled Gray as yet, remedy the situation post haste.

SIMILARITY MATCH: 80%
Alasdair Gray and Iain Banks share more than just a nationality – they both discuss real life and real growing pains in the country of their birth, often with a surrealist twist.
***

Many readers may enjoy Banks for his depiction of Scottish life, taking delight in recognising place names and local areas of interest.

Kelman does for Glasgow what Banks did for Edinburgh, bringing to life the city and its inhabitants, particularly the poorer ones.

Indeed, Kelman is a master at depicting the futility and depression of the Scottish working class, something that Banks has touched upon now and again throughout his work but never fully explored.

SIMILARITY MATCH: 70%
James Kelman and Iain Banks both discuss youth and young manhood in Scotland, though Kelman’s characters are often poorer and more desperate than Banks’.
***

Fans of Trainspotting will be familiar with Welsh’s warts ‘n’ all approach to writing, never shying away from uncomfortable, unpleasant or controversial subject matter.

Banks is comparable in his treatment of such taboo themes as incest, S&M and other forms of sexual deviancy or departures from ‘the norm’.

Of course, this willingness to tackle the squeamish or subversive side of life is nowhere more obvious than his debut novel, The Wasp Factory.

Here, his central character combines the mindless aggression of Begbie with the cunning of Sick Boy and a myriad of personal problems that make those faced by the cast of Trainspotting look like a walk in the park.

SIMILARITY MATCH: 60%
Both Irvine Welsh and Iain Banks focus on the realities of growing up in Scotland, though Welsh’s characters are often from a lower social class and more troubled backgrounds than Banks’ – and he writes in Scots dialect, as well.
***

Christopher Brookmyre and a Piercing Wit

Brookmyre shares with Banks a love for dry humour and a delicious sense of irony.

Love for dry humour and a delicious sense of irony

His most acclaimed work One Fine Day in the Middle of the Night showcases his wit perfectly and the all-action plot can also draw comparisons with such Banks works’ as Complicity, Transition and Canal Dreams.

Furthermore, Brookmyre also comments on politics in his work, as does Banks in many of his novels, including Dead Air, The Quarry and The Business.

SIMILARITY MATCH: 55%
Both Christopher Brookmyre and Iain Banks use clever wit and unexpected plot twists in their stories, although the former’s are often more far-fetched and outlandish than the latter’s.
***

Banks’ work tends not to be as simplistic as a mere detective story, though on occasion he has dabbled in the genre.

Dead Air, for example, is a perfect example of a detective story written using Banks’ distinctive style and throws in elements of shock and awe.

Rankin, his namesake, has forged himself a career doing just that on a consistent basis with his hugely popular Rebus character.

Again, as with many of these authors, the Scottish setting places a significant role in the story, and will be a draw for readers hailing from that country.

SIMILARITY MATCH: 55%
Ian Rankin and Iain Banks use Scotland – and specifically Edinburgh – as the settings for their novels, but although Banks sometimes writes crime fiction, he also explores other themes; Rankin writes almost exclusively about his detective Rebus.
***

Other Authors Similar to Iain Banks

So far I have concentrated entirely on Banks’ compatriots; however, further afield, there are many others who also evoke a similar style and achieve similar results.

Personally, I have found huge similarities in the work of Haruki Murakami, who also combines down-to-earth characters with unearthly situations and gentle humour. If interested, you can read more about my opinions on his work elsewhere on the site.

Of course, Banks also wrote a huge number of other books when using his middle initial in his authorship.

These works are much more science-fiction orientated than Banks’ mainstream contemporary fiction, but still offer great writing and gripping storylines.

Who Did I Miss?

I must have missed someone… who is it?Let me know your favourite authors similar to Iain M Banks below and we can all join the party.