Resident Evil 4 – Best in Series? 5 Reasons for a Clear YES!

Resident Evil 4 is horror and action of the highest level. A great story, immense variety and the revolutionary gameplay are only a few reasons why Resident Evil 4 is one of the best games ever made. ~ Claudia Windberger

Do you enjoy survival horror, mutated zombies with strange accents, biochemical experiments (in a game story, not trying it at home – please don’t do that), smashing heads and acting like the hero?Then Resident Evil is the perfect game for you. But with 24 games in total (8 main games) it’s hard to tell which one is the best of the game series.

And if you haven’t played any of them, which one is the best to start with?

Well, the answer is easier than you might think: Resident Evil 4 -best in series!

Why is Resident Evil 4 so good? In my opinion Resident Evil 4 counts among the best video games ever made. The Zombie-Shooter is the only game I played 3 times in a row, so here is a quick warning: this game is extremely addictive.

Not ready for taking this risk?

I’ll give you 5 reasons that will make you forget about all the risks.

Unlike the first 3 games of the series, Resident Evil 4 is not based on the events of RacoonCity. What is RacoonCity and what the hell happened there you ask? Well, it doesn’t really matter but here is a quick summary of the original story: The residents of the city have been transformed into zombies by the T-virus – a biological weapon developed by the pharmaceutical company Umbrella. You basically spend the first 3 games fighting this company and their zombies.

The 4th game takes place 6 years later. Of course there are various connections to the original story but you won’t get into trouble if you see Resident Evil 4 as a separate game – a perfect game to start with. While you can easily get confused in the other games – even the ones after Resident Evil 4, seeing as you have lots of different characters you can play with and numerous side stories – this is a complete game with a rounded story.

As U.S. special agent Leon S. Kennedy (one of the protagonists of Resident Evil 2) you have the top-secret mission to save Ashley Graham, the president’s daughter, who has been kidnapped by the mysterious sect Los Illuminados.

You will already find the girl rather early in the game but don’t be overjoyed by this first achievement; you will change your mind instantly as this girl is an annoying pain in the neck. Whilst getting her out of this misery, she’ll be clinging to your coat-tails all the time. She’s literally the most dependent girl you’ve ever seen and you will hear the words “Leooon heeeelp” more than a hundred times. 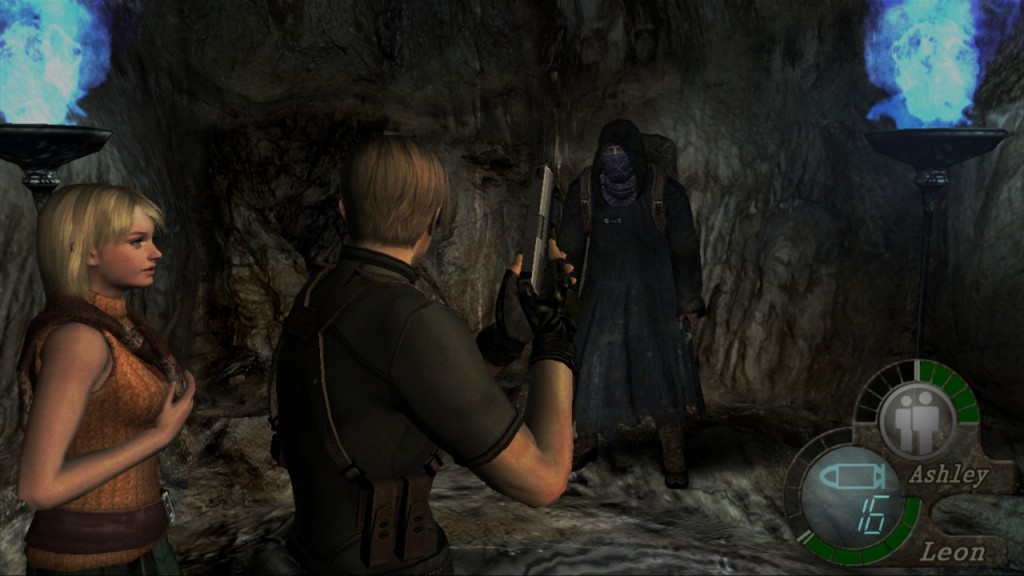 In most of the other Resident Evil games you sneak around in the same dark places all the time (except Resident Evil 5 where you hunt zombies in the sun under palms – which felt more like a holiday than horror), Resident Evil 4 leads you through a variety of levels, areas and enemies.

You start off in a classical old, foggy village full of walking dead farmers and the occasional chainsaw uncle. At this point you don’t really have a lot of ammo and when you hear the chainsaw coming closer and closer you just want to run away and hide – if only you could find a place to hide. But no worries, you will find the one or other second to recover from this shock. And should you get bored (when the zombies go to bingo – yes, this actually happens) you can still shoot cows and chickens.

Once you make it out of the village, a creepy castle full of hooded sectarians with weird Spanish accents awaits you. Just to make it clear, I don’t mean a castle like Princess Peach’s pink castle form Super Mario. It’s a dirty old castle full of traps, dark creatures, weapons and a little foolish dwarf who will get on your nerves even more than Ashley. In my eyes this is the perfect residence and I always wanted to live there, as crazy as it might sound.

As if this wasn’t enough, you will be obliged to leave this beautiful castle and take a boat to a bleak island, where you will be welcomed by numerous soldiers and fully armed workers.  But what you’ll find in the basement will scare you to death (make sure you play it at night): A laboratory full of unfinished experiments, blood on the walls and dead bodies (or what’s left of them). Some of those experiments, called Regenerators are alive. It’s hard to move when all you hear is their heavy breath. You really want to avoid bumping into them but at some point you’ll see them, just to ascertain that you can’t actually kill them with your gun. So what do you do? Well, I won’t tell you. 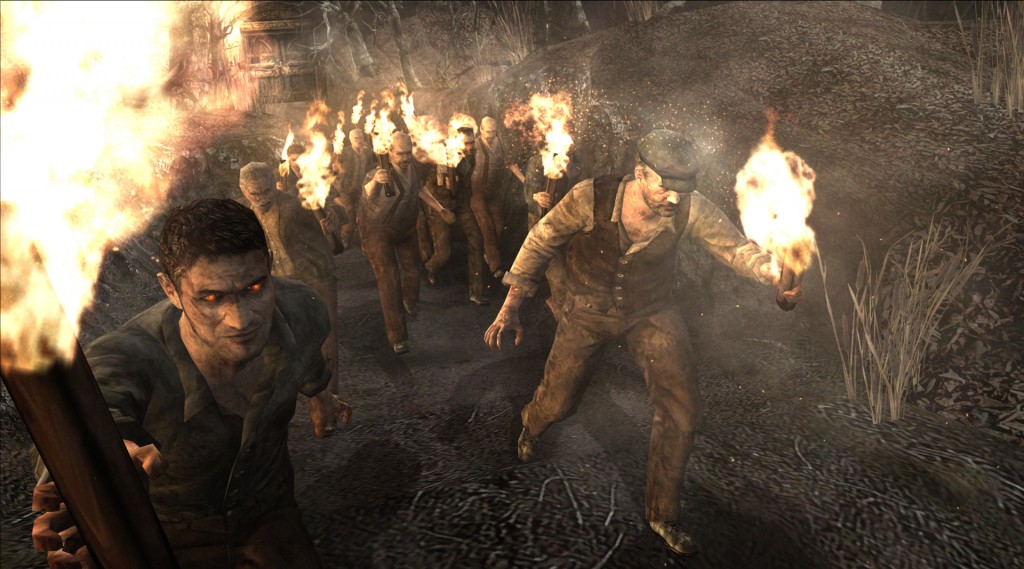 Resident Evil 4 revolutionized the third-person shooter genre. For the first time you get to control the protagonist from an over-the-shoulder perspective and zoom in when you’re aiming at enemies, which gave us a completely new and more realistic gaming experience at the time. This viewpoint has become a standard in third-person shooters like Gears of War. Tank-like controls now belong to the past.

Also aiming at enemies became much more realistic and easier to handle with the laser pointer. Finally you can blow off a zombie’s head, which is great fun as the zombie doesn’t drop the same way over and over, no matter where you hit him. I have to admit because of that development I became kind of obsessed with headshots, which I probably shouldn’t shout out loud in public.

And shooting zombies is not the only action anymore. Leon can knock out zombies with mega cool kicks or wrestle with them when he gets attacked, which wasn’t possible before.

At the end, all this might make Resident Evil 4 more of an adrenaline-packed action game, rather than a survival horror. But in my point of view there is nothing wrong about it, as thanks to that the game is fast paced and exciting from the first until the last scene. 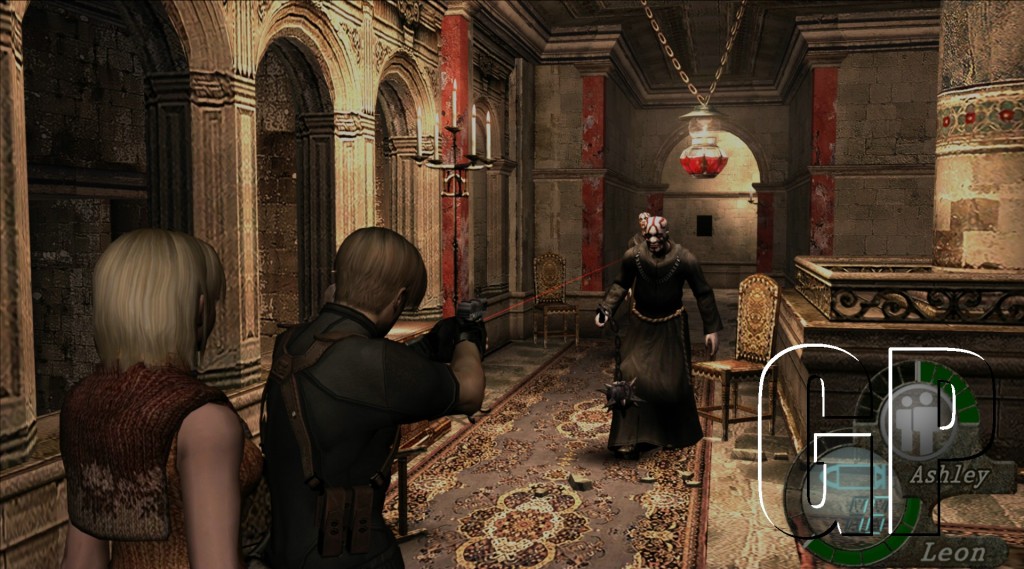 Besides the “cool cop” Leon S. Kennedy there are many side characters you just have to love. First of all there is the beautiful and mysterious Ada Wong. We don’t know much about the girl in the red dress but her mission is to steal a sample of the virus, and seeing as she knows Leon from past missions, she helps you out in many grave situations.

I was really excited when I found out that by completing the main game you unlock “Separate Ways”, where you can play the story from Ada’s point of view. This means the fun starts all over again, only this time in a dress and high heels (and many other features which I won’t reveal at this point).

Another companion in the game is the Spanish researcher Luis Sera who used to work for Los Illuminados but rebelled against them. He’s a nice chap who will help you out during the most hopeless situations, and makes odd comments in the most inappropriate moments. I don’t want to spoil anything, so just keep cool when things take a turn for the worse.

And let’s not forget the “dealer” of the game, known as the Merchant. He’s really got style  and when he opens his black trench coat and offers you loads of merchandise with his cockney accent, you’ll have a blast!  Wherever he appears you can sell found treasures, buy weapons, upgrade your current weapons or buy useful equipment.

This way is much more fun and more realistic than just collecting stuff on the streets, and it requires a measure of organisational skills because the space in your case is limited. You can’t imagine how much time I spent reorganizing my case because I wanted that Killer7 (Magnum) so badly, but didn’t want to give away my beloved TMP. But no worries, the Merchant even has big cases in his range, if you can afford it.

And just one tip: don’t kill that guy (yes, you can kill him), he’s irreplaceable! 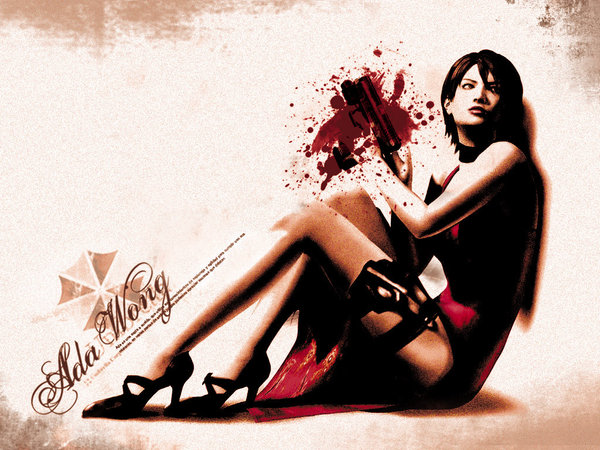 Yes, believe it or not, a shooter on the Wii can actually be great fun. Capcom did an impressive job on this edition. The game itself hasn’t really changed but the gameplay with the Wii remote gives you a great aiming experience and all that on  a widescreen mode with better and more detailed graphics than the original.

By using the Wii remote and the Nunchuck you can walk and aim at the same time which means faster and more precise shooting. It might need some time to get used to those controls but once you manage it you won’t go back to the boring original controls.

Wii also offers some nice looking features like a gun for a more realistic experience. To be honest, I don’t really need all those gimmicks but if you enjoy threatening your TV with a fancy plastic gun this could be something for you.

All in all Resident Evil is one of the best games ever made for the Wii and is an absolute must-have for every fan of shooter games and survival horror.

Now you know why Resident Evil 4 is the best game in Resident Evil series for me. Do you agree or do you prefer other games of the series? Let me know below.