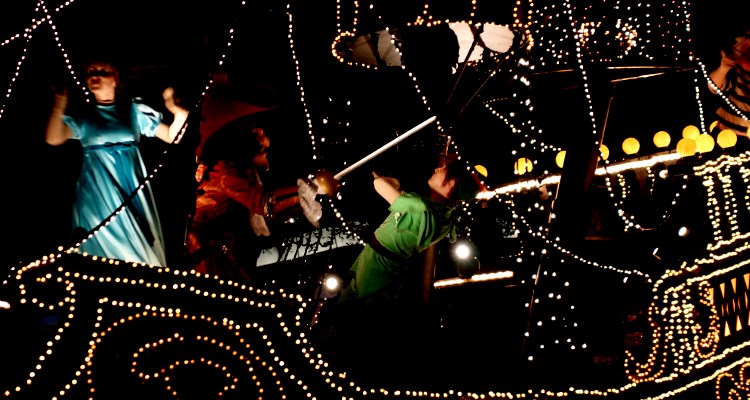 Disney’s animated musical Peter Pan is iconic.  But there’s a silent movie and live action Peter Pan out there too – and don’t forget Hook!
~ Jane Howarth
This story’s been around for a century – and J. M. Barrie’s story inspired more Peter Pan movie adaptations than you might think.

Grab your shadows and thimbles, we’re taking a trip to Neverland!

Peter Pan’s shadow first crept onto screens in 1924 – before those fancy talking pictures were a thing.

The first Peter Pan (1924, Herbert Brenon) was pretty basic by today’s standards (looking at you, Nana), but wow, see them flying?

And there’s a tiny lil’ Tinkerbell!

The Peter Pan We All Know

Do you recognise the voice of Wendy?

Which brings me to the next great feature of the Disney classic – the amazing songs.  I don’t know about you, but my favourite has got to be You Can Fly.

Hope you’re in the mood to sing along!

To Live Would Be an Awfully Big Adventure

Peter Pan With a Great Cast

Our next live-action gets bonus villain points for casting Lucius Malfoy, Jason Isaacs, as Captain Hook.

This movie brings up some of the melancholy themes from the book too.

What does that mean for you?

It’ll break your heart a little, but it’s ultimately cosy and inspiring.

But if you’re looking for grubby Edwardian London instead, give live action miniseries Neverland (2011, Nick Willing) a try.

One of the Kind that Likes to Grow Up

So there we have it – a whole lot of Peter Pan media adaptations to choose from!

And if you’ve exhausted ‘em all, there are some great almost-adaptations out there too.

They let the story grow a little, so you can get your Neverland fix with a twist.

It seems like they could have made a fun movie without veering from Businessman Pan to food fights.

But a lot of people love this movie, so maybe I’m just weird.

Robin Williams fans will love it, so if Mrs Doubtfire’s (1993, Chris Columbus) your go-to, give this one a try.

Straight on ‘Til Morning

We’ve reached the end of our Peter Pan journey!

Did you wave to the mermaids?

These adaptations all tell the story in a different way, but I hope you’ll love them.

If you grew up with one, what do you think of the newbies?

Are they hopeless imposters against the might of that old VHS favourite, or have they shown you a whole new side of Neverland?