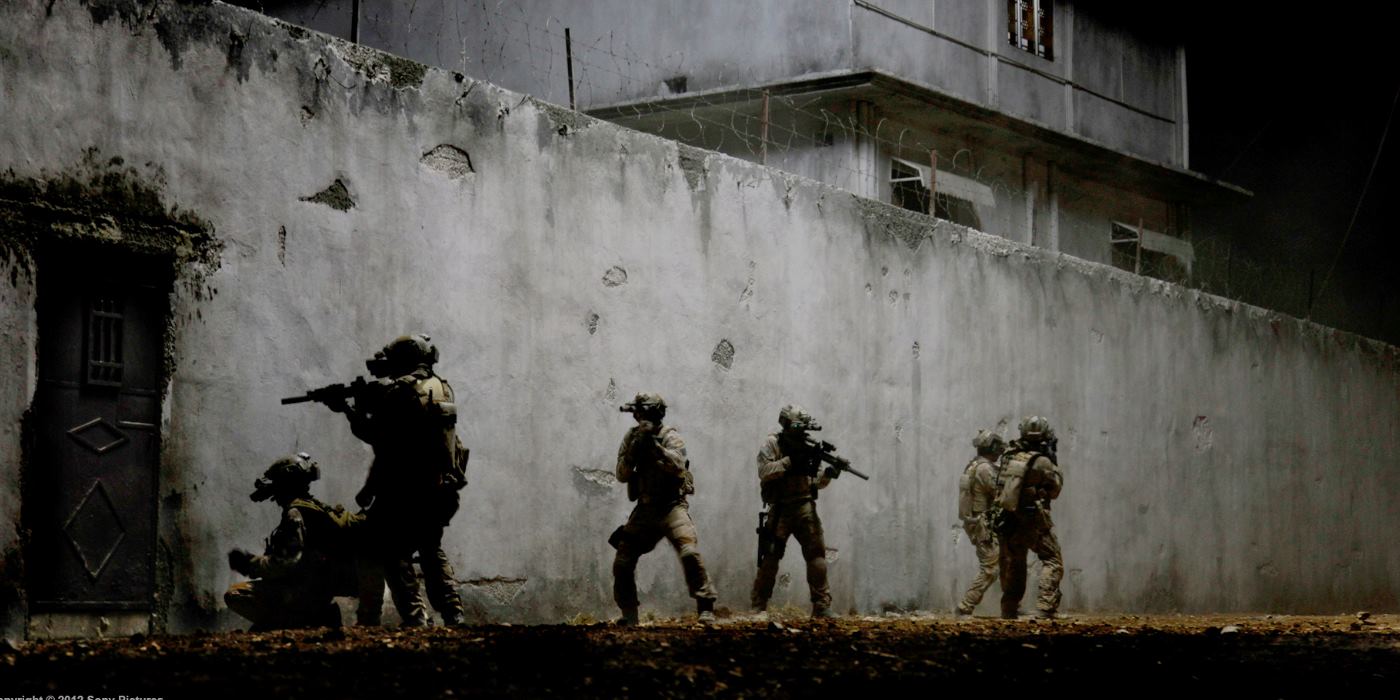 7 Movies like Zero Dark Thirty: Warfare in the Shadows

The Western world has been waging clandestine warfare for generations. Zero Dark Thirty (Kathryn Bigelow, 2012) details the story of CIA agents fighting on the frontlines in the war on terror. ~ Andy McKendry
***

It’s brutal, primitive, and perhaps not quite as effective as we were lead to believe but Zero Dark Thirty explores the legacy of torture and its apparent success in finding and killing Osama Bin Laden.

As a Film graduate, it is clear to me that film has the power to challenge our preconceptions and to shape the way that we see the world. But it can also be used for propaganda purposes – something that Zero Dark Thirty has certainly been accused of.

However, although Zero Dark Thirty smacks of US patriotism, it is still a thrilling narrative and one that is distinctly fitting for a Hollywood film. For lovers of spies, spooks, and warfare from the shadows here are four films similar to Zero Dark Thirty for you to explore.

The Kingdom is an action-packed investigative movie following the story of an elite FBI team sent to Riyadh, Saudi Arabia. The team are led by veteran field agent Ron Fleury (Jamie Foxx) and they are forced to navigate a city that doesn’t want or need them there.

Really, The Kingdom stands as a subtle political film that comments on the nature of foreign soldiers conducting operations in a city far from home. There are clear ramifications for the FBI team as they slowly discover that they are completely out numbered and alone.

Their mission is to find and infiltrate a terror cell operating in the Saudi capital. This task, however, becomes ever more difficult courtesy of cultural differences and opposition from local law enforcement.

The Kingdom is a film that portrays its FBI team as unwitting pawns in a much larger political game.

SIMILARITY MATCH: 70%
The Kingdom is much smaller in terms of scope but its narrative reminds us of how dangerous the world can be when we go it alone.
***
`Body of Lies’ (Ridley Scott, 2008)

Leonardo Dicaprio stars in Ridley Scott’s Body of Lies as Roger Ferris, a CIA agent tasked with finding a terrorist leader. To do so Ferris creates a fake terrorist cell in an effort to draw his foe out of hiding. Ferris enlists the help of master of subterfuge Ed Hoffman (Russell Crowe).

Body of Lies isn’t the most imaginative of spy movies but it does find originality and a sense of purpose in the pairing of Crowe and Dicaprio. Both add weight to what would otherwise be another espionage procedural and Mark Strong also does a convincing turn as the head of Jordanian intelligence.

What does mark this film out however is the ambiguity at the heart of the narrative. Secrets have to be kept and everyone keeps their cards close to their chests ensuring that much of their mission’s potential is squandered. The suggestion being that if we worked together and had better political international relationships, terrorism would be much easier to deal with.

Body of Lies is a Ridley Scott epic with all of the bells and whistles but it’s in the human portrayal of the characters (thanks to the good casting choices) that it finds its tone.

SIMILARITY MATCH: 70%
Body of Lies tells a similar story of international intrigue and conspiracy but it has a different moral tone to Zero Dark Thirty’s jubilance.
***
`Syriana’ (Steven Gaghan, 2005)

Syriana is a gripping geopolitical thriller that explores the role of oil in shaping international politics. Set in the volatile Middle East, the narrative stitches together several disparate stories.

There’s an American lawyer attempting to merge oil companies, a Swiss-based energy analyst, and a CIA agent who discovers an unsettling assassination plot. What’s interesting about Syriana is the fact that it challenges not only our preconceptions but also the way that we live our lives.

It shows that our reliance on oil (and all of the industry that it supports) has a clear effect on the safety and security of Middle Eastern citizens. Syriana also cynically shows just how thoughtlessly we exploit and take from nations that are deemed less powerful than our own.

Matt Damon and George Clooney star in this prescient thriller that poses more questions than it answers.

SIMILARITY MATCH: 60%
Less a story about how we ‘won’ the War on Terror, and more an important didactic lesson that reminds us that our lives are supported often by the suffering of others.
***
`Babel’ (Alejandro Gonzalez Inarritu, 2006)

Babel documents the story of a singular weapon and how it affects a diverse group of people from all walks of life and disparate corners of the globe. The story follows an American couple on holiday in Morocco and the trauma that they experience when a young boy shoots a gun at their bus.

He fires only one shot but the reverberations are felt the whole world over. In Tokyo, a young deaf girl lives her life in stark contrast to the young boy from Morocco but her father is tied to the gun fired half way across the globe.

And in Mexico, a nanny attempts to smuggle her charges across the border into the more opulent United States. Each person is different but their stories are the same. It doesn’t matter who you are or where you come from, your world can change in an instant and no one has any real sort of control.

Babel is transnational cinema and it’s interlocking narratives show just how similar we all are. It’s a brave and stylised piece of filmmaking that has marked similarities with Crash (Paul Haggis, 2004). Multiple narratives interweave to show just how much our lives and our choices affect those around us, and the way that the consequences of our actions can span international borders.

SIMILARITY MATCH: 50%
This isn’t a spy film, it’s not a film about the righteousness of action – instead it shows just how fragile our lives can be.
***

There are plenty of spy films and political epics for you to watch but just in case you’ve seen all of the above here are some other movies like Zero Dark Thirty for you to watch.

A story that contains lots of stories that intersect around one action, Crash is intricate cinema.

Zero Dark Thirty and Crash share a similar reliance on multiple points of view but Crash will leave you feeling like right and wrong are much more subjective than you previously thought.
***
`The Bourne Identity’ (Doug Liman, 2002)

This story of an amnesiac CIA assassin forced to fight highly skilled killers, coupled with a narrative that drags you around Paris is a compelling watch.

SIMILARITY MATCH: 80%
This is a much more personal story than Zero Dark Thirty’s with its consideration of the effect of a covert life on the individual himself.
***
`American Sniper’ (Clint Eastwood, 2014)

Clint Eastwood’s latest film lends a touch of the spaghetti western genre to the War in Iraq in its depiction of an elite American sniper.

American Sniper and Zero Dark Thirty are two films that celebrate the strength of American muscle.
***

Which is the Best?

Thrillers, spy movies, and political statements – all of the films above have a reliance on action and set pieces but they all tell diverse stories that contain disparate didactic lessons.

Zero Dark Thirty is a spy film that celebrates the CIA and the way that it conducts operations but not every film on the list has the same message.

It’s worth exploring further and making your own mind up regarding the last decade of Western ‘intervention’ in the Middle East. I would argue that Babel is the most influential film on this list with its transnational narrative, individualistic focus, and its suggestion that we all influence the world but not always for the better.

Let me know what you think in the comments below.