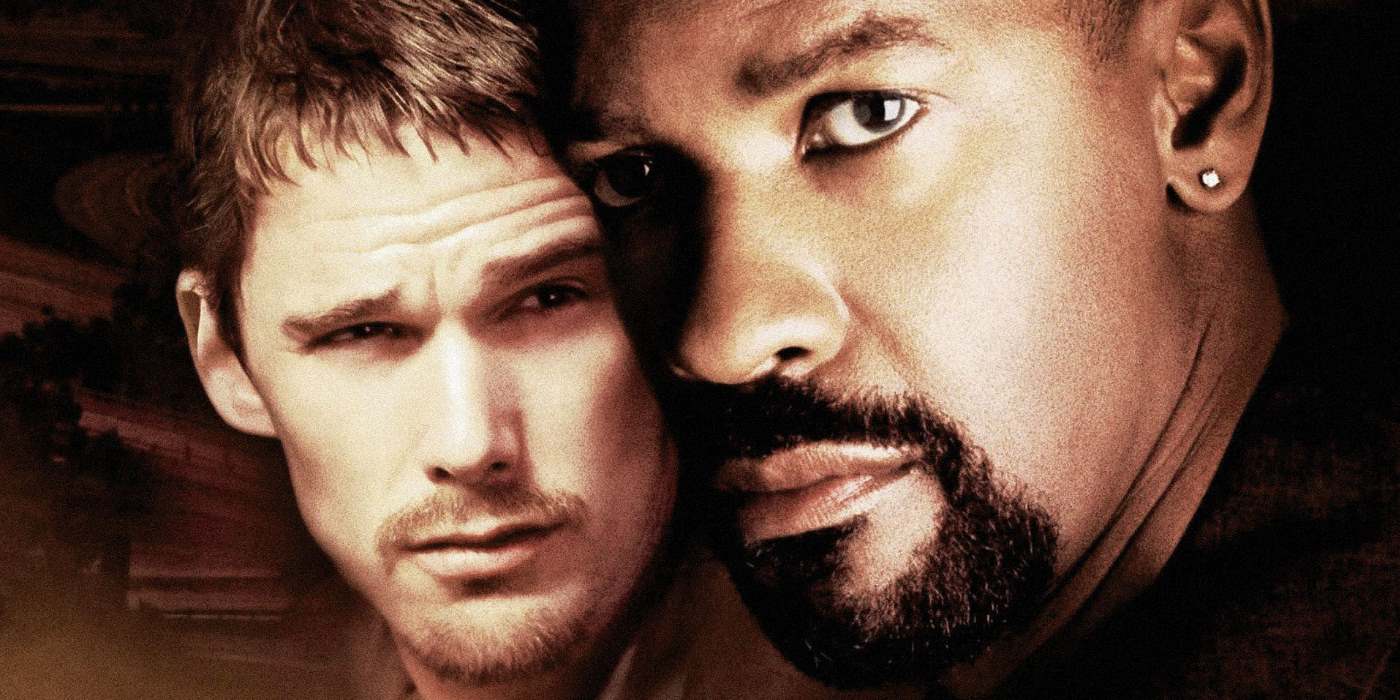 Training Day (David Ayer, 2001) is an action-packed film with a great cast and an epic finale. Here are some movies like Training Day for you to enjoy. ~ Andy McKendry

As a Film Studies graduate, an avid film consumer, and as a screenwriter, I love a well-crafted film. Training Day always stands out to me as a film that manages to be both thoughtful and action packed.

It’s a rare breed but perhaps not quite as rare as you may think. Here are some great movies similar to Training Day. These films have been carefully selected because their strong narratives blend together action with character-led storytelling to create compelling cinema.

End of Watch is a film written and directed by David Ayer and it has marked similarities to his earlier film, Training Day. Both deal with police officers in LA and highlight the importance of trust, albeit with decidedly different outcomes.

The acting in End of Watch is what makes the film special. Jake Gyllenhaal stars alongside Michael Pena as two LAPD street cops. They are close, they know each other well, and they navigate the treacherous city streets with skill. The film is shot on hand-held cameras mimicking the perspective of the police officers themselves.

End of Watch is a riveting film and it’s more than just mindless action orientated entertainment. Instead, it’s a film about two police officers and it shows just how dangerous their world is and just how brave they have to be to survive each day.

SIMILARITY MATCH: 90%
End of Watch is the good cop to Training Day’s bad, but both share a similar obsession with the relationship between two officers navigating the mean streets of Los Angeles.
***
`Collateral’ (Michael Mann, 2004)

Jamie Foxx stars in Michael Mann’s Collateral as a taxi driver who has the unfortunate task of driving a hit man (a silver-haired Tom Cruise) from hit to hit.

It’s another late night thriller and this one has a ticking clock narrative. Cruise has a quota to meet before sun up and Jamie Foxx has to ensure that he makes his deadline.

Collateral is notable for its casting choices and Cruise has never before (or since) played a ‘bad guy’. It’s a film that casts against type and the pairing of Cruise and Foxx is one of its strengths. Cruise is a hit man poet who spouts philosophical perspectives to justify his immoral lifestyle and Foxx is his opposite – a kind and considerate man who realises that he has to stop Cruise and, in turn, stop the killing.

Michael Mann is a director known for his filmic depictions of criminal life. Collateral is no exception and it’s yet another film that explores the dark underbelly of late night LA life.

Nightcrawler is another film starring the talented Jake Gyllenhaal. It follows the story of Lou Bloom, an insomniac sociopath who stalks the late night streets of LA looking for easy pickings. He finds a new career as a nocturnal cameraman and speeds around the city looking for journalistic opportunities.

Lou is a man without conscience and he happily alters crime scenes (before the arrival of the police) to ensure that he has the best-shot possible. He is a man that values control above all else (similar to Denzel Washington’s character in Training Day) and Lou believes that the end always justifies the means.

Once more, it is a film about two men and their working lives. Riz Ahmed stars alongside Gyllenhaal as his assistant and they drive recklessly around LA in a bright red sports car.

The cinematography is evocative of traditional Americana and the satirical edge is reminiscent of Sydney Lumet’s Network. Nightcrawler is a late night B-movie, but at its heart, it is a film that says some prescient things about the nature of journalism in the digital age.

The original Bad Lieutenant is a film mired in the unpleasant world of police corruption. In this movie, the setting is New York and our ‘hero’ (Harvey Keitel) is dealing with the consequences of drug and gambling addiction. He strives to balance his obligations as a police officer with his insalubrious lifestyle.

Bad Lieutenant is the story of a man attempting to find some sort of peace and forgiveness but his actions make those outcomes increasingly unlikely. It isn’t quite as similar to Training Day as some of the films already mentioned as our protagonist is a loner cop with no one watching his back. This ensures that Bad Lieutenant is a film with a darker and perhaps lonelier narrative.

There are no reprieves, no one cares, and our hero is thrown into a purgatory of his own making. Whether or not he survives is completely dependant on his own actions and choices.

SIMILARITY MATCH: 50%
Bad Lieutenant contains only half of the necessary buddy cop formula, but it’s still a highly recommended watch.
***

It’s all about the relationship and the journey.
***
‘The Departed’ (Martin Scorsese, 2006)

You’ll be invested in the characters, their aspirations, and their failings.
***
‘In Bruges’ (Martin McDonagh, 2008)

Completely different in terms of tone but similar in terms of emotional investment, this film ends on a bittersweet note.

Sometimes, you have to sacrifice what means the most to you; this film will tug on your heartstrings.
***

Storytelling is an important part of what makes us human and the above films are all great examples of how we articulate our stories within the cinematic form.

If you’re looking for the film that’s closest to Training Day in terms of story, then look no further than David Ayer’s later movie End of Watch. Gyllenhaal (ever the professional character actor) brings a beating emotional heart to the cop drama format.

What do you think? Are there any films that I missed?