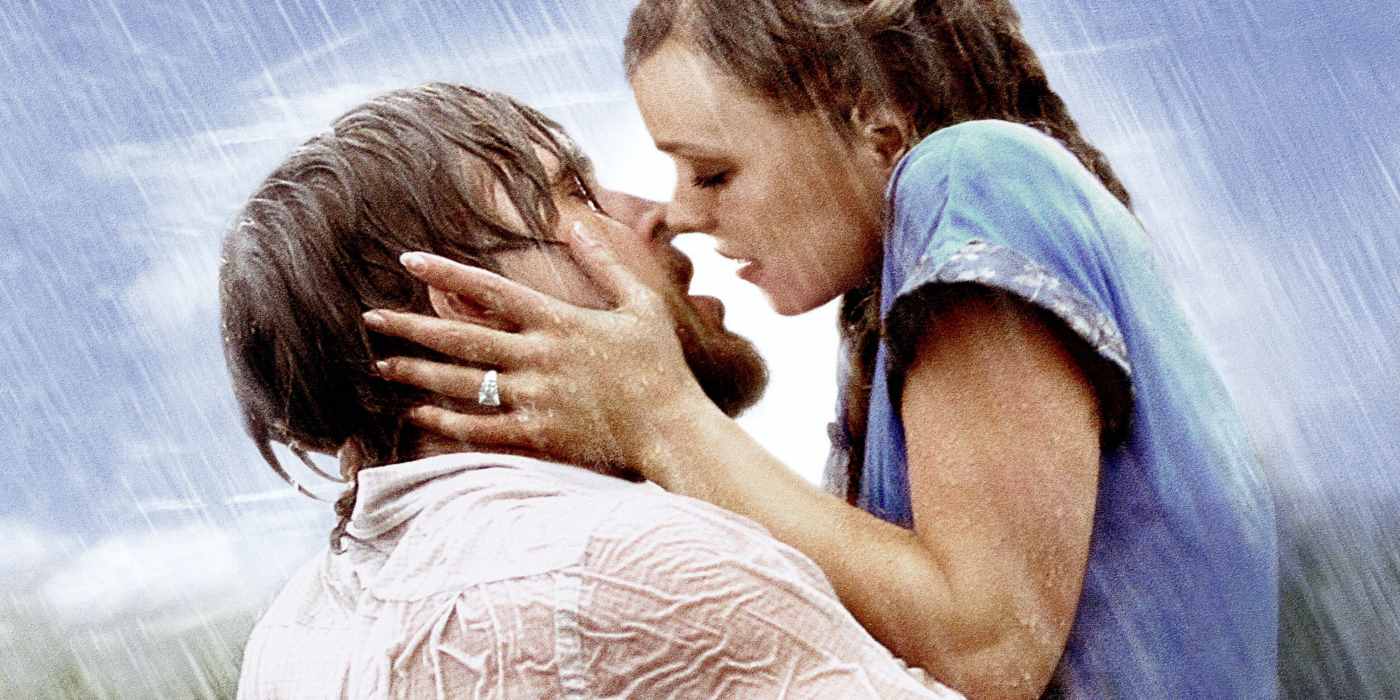 Girls, are you ready for your big night in? Let’s talk rom-com movie marathon!

What do you like the most about ‘The Notebook’? The romance or the drama? Ryan Gosling?

OK, fine: so we all know that there aren’t movies like ‘The Notebook (2004)’ but I believe the themes of love, romance and general twists and turns in life can be found in other films that are similar to ‘The Notebook’.

I have searched all around the internet for you, so you don’t have to. There’s endless of “100 best films” lists to go through – we don’t have all day, so I have hand-picked some movies that have various degrees of emotional intensity.

Are you sitting comfortably? Let the sob-fest commence!

Movies Similar to ‘The Notebook’…

It’s all up here now! You want to move something, you got to move it with your mind! You got to focus, you hear what I’m sayin’?

The emotional crescendo in the film develops quite early on while the rest of the story has a bit less impact.

Still, this movie has become a classic so if you haven’t watched it or maybe you hadn’t watched it in a while, you know you can have a good cry. Talking of which, more on movies to make you cry in Kerry’s article.

Plenty of sniffles throughout with a smattering of light-hearted moments courtesy of Woopy Goldberg as the medium who can channel the spirits
Ghost is such a popular movie that it has also become a musical at the theatre (Dave Steward, formerly of Eurythmics, wrote the music).

Just like ‘The Notebook’, you will be drawn to the love story and the tragedy that goes with it. Thankfully there’s some laughter too to give you a bit of a breather.

SIMILARITY MATCH: 80%
Boo! Scared? No, this is not your typical ghost movie – you will probably struggle not to weep at Patrick Swayze’s departure from the living…
***
‘Jane Eyre’ (Cary Fukunaga, 2011)

I am a free human being with an independent will, which I now exert to leave you…

I have already spoken very briefly about this film in another article about Michael Fassbender (any excuse to talk about him).

Let’s expand a bit more on ‘Jane Eyre’: this version is stunning, with superb photography and paired down yet intense performances.

Lives evolve in parallel and there’s Mr Rochester’s mystery wife to deal with. She is almost like a character from a different novel herself living her life locked up and cut off from the world.

Without giving too much away, the scenes with ‘Jane’ (Mia Wasikowska) and ‘Mr Rochester’ (Michael Fassbender) are electrically charged: most of them are darkly lit so you need to squint and prick up your ears to focus on the dialogue. The final scene will have you in tears.

Like ‘The Notebook’, there’s parallel lives and there’s tales of loss and love. There’s emotional intensity, but gently whispered.

Sound good? Make sure to also have a look at these other movies similar to ‘Jane Eyre’.

SIMILARITY MATCH: 70%
Parallel lives, longing to connect – there’s elements of ‘The Notebook’ in this movie adaptation of Brontë’s novel.
***
‘The Remains of the Day’ (James Ivory, 1993)

You know what I am doing, Miss Kenton? I am placing my thoughts elsewhere while you chatter away…

As a fan of both Merchant Ivory productions and Emma Thompson, picking ‘The Remains of the Day’ was a no-brainer. Now let me explain why this is the perfect ending to the perfect night in.

Based on the novel by Kazuo Ishiguro, this film follows the lives of a butler, his master and a new housekeeper.

As the housekeeper ‘Miss Kenton’ (Thompson) slowly falls in love with the very cold and insular butler (Anthony Hopkins). The real story of the lord of the house unfolds, and it’s not pleasant. This makes the butler, Mr Stevens, increasingly uncomfortable as he finds out more about his master. He believes a master must be morally superior.

This internal struggle makes him closed up to love; he feels disappointed and hurt.

This film is gentle, some may say it’s slow paced, and beautiful. It’s all about inner feelings and unspoken words.

To note: it’s moving to see the late Christopher Reeve, he was a very good actor, too easily typecast as Superman.

This is a story about mature love which ties in with one of the stories in ‘The Notebook’.

SIMILARITY MATCH: 50%
The focus on mature love in ‘The Remains of the Day’ matches one of the story threads in ‘The Notebook’
***
‘Definitely, Maybe’ (Adam Brooks, 2008)

Fine, I’m gonna tell you the story, but I’m not telling you who your mom is…

There’s a couple of similarities between ‘Definitely, Maybe’ and ‘The Notebook’: one of them is the use of parallel stories.

In this film ‘Will’ (Ryan Reynolds) tells his daughter ‘Myla’ (Abigail Breslin) about the three most important relationships in his life, including her mother.

Will decides not to reveal who her mother is in the story and changes the three women’s names so that Myla needs to keep guessing.

Each relationship comes with elements of romance, drama and jealousy. There’s an impending divorce to deal with, too.

There is a lot of tenderness in the father/daughter relationship but it’s not overwhelmingly sweet: this is apparent very early on as Myla recounts to her dad what she had learned that day at sexual education class…

The gift of a book that has a special meaning is particularly poignant: without spoiling the surprise, the scene with the book is probably the best in the film.

There is a very similar emotional charge to ‘The Notebook’ in this movie but not as devastating so it is the perfect start for the movie marathon.

SIMILARITY MATCH: 50%
Lives intertwined, love interrupted – both ‘The Notebook’ and ‘Definitely, Maybe’ have a mix of tenderness and good story-telling.
***

Love winning over all adversities, love crossing continents and getting wires crossed… there’s plenty for everybody!

Whichever of these “weepy” films like ‘The Notebook’ you choose today, you will love it for sure!

The odd thing about this form of communication is that you’re more likely to talk about nothing than something. But I just want to say that all this nothing has meant more to me than so many somethings…

Let’s take things easy – this movie will let you in gently and you won’t be sobbing uncontrollably so you could start your sob-fest here as the comedy element of this rom com will make you smile.

Before Whatsapp and emoticons, you simply got mail. It looked clunky, and communications were even clunkier!

Like ‘The Notebook’, the correspondence element (albeit electronic) is the main theme that brings our protagonists together.

Love letters appearing in your letterbox, the thrill of the “ping” noise that a new incoming email message makes… No matter what, the written word is powerful to express your feelings.
***
‘Titanic’ (James Cameron, 1997)

Don’t you do that, don’t say your good-byes. Not yet, do you understand me?

Whether you haven’t watched ‘Titanic’ (check out some great similar movies here) or it has been a while since you last watched it, if you fancy putting together a sob-a-thon then you need to add ‘Titanic’ to your list.

Unfortunately cruise ships, even with all their luxury and comfort, can be a risky way to travel… And if you are lucky enough not to get cabin fever, then get transported by the romance.

Heroes and damsels in distress… Need I say more? Ecstasy and despair, all rolled into one.
***

Here’s a quickfire round of “weepies” to keep you busy for a while:

The scene where the couple agrees to meet at the top of the Empire State Building inspired many movies, notably ‘Sleepless in Seattle’.

Are you ready to cry like a baby? Here’s your ‘Romeo and Juliet’ movie with all the dramatic elements of a great story.

These lovers are already taken – will love survive all adversities?

Have you got 3 hours 20 minutes to spare? Great, then you can catch up with one of the greatest movie classics!

Clint Eastwood takes a departure from action movies to star and direct in this delicate story of mature love.

More lives intertwined with real love versus conventional love – another epic movie that has become a classic.

I would also like to add two of my favourite movies:

Both the book and the film are loved by adoring fans around the world and the reason is that this is a love story between two young people who have cancer.

There’s sincerity and depth, both of which make this film unforgettable.

Not a dry eye in the house.

Here’s a list of great similar movies for when your tears have dried though, enjoy!

This Italian film is one of my favourites, mostly because it is located in my hometown Trieste.

Again, like in ‘The Notebook’, there’s different lives intertwined and a love affair that is impossible to forget.

Let’s Remember Why We All Love ‘The Notebook’

What are your favourite scenes from ‘The Notebook’?

We all know it’s the “Why didn’t you write me?” scene in the rain, am I right?

I really like the scenes with Gena Rowlands and the late James Garner, who passed away in 2014. You don’t see many good films starring actors over 70 and it’s a shame.

I’m in a generous mood: as an extra bonus, here’s a video about the audition process for The Notebook.

What Mood Are You in Today?

Personally, I think that these films give you a nice sense of emotional release – emotions are what make us human after all.Do you think you are going to sob-out-loud or will you all go “let’s not get too upset”?

Don’t forget to add your comments below, I’d love to know which movie caught your eye and how your night in went!