See More Results
Home > Movies > Movies Like > 13 Movies like The Fault in Our Stars: Bonds Can’t Be Broken 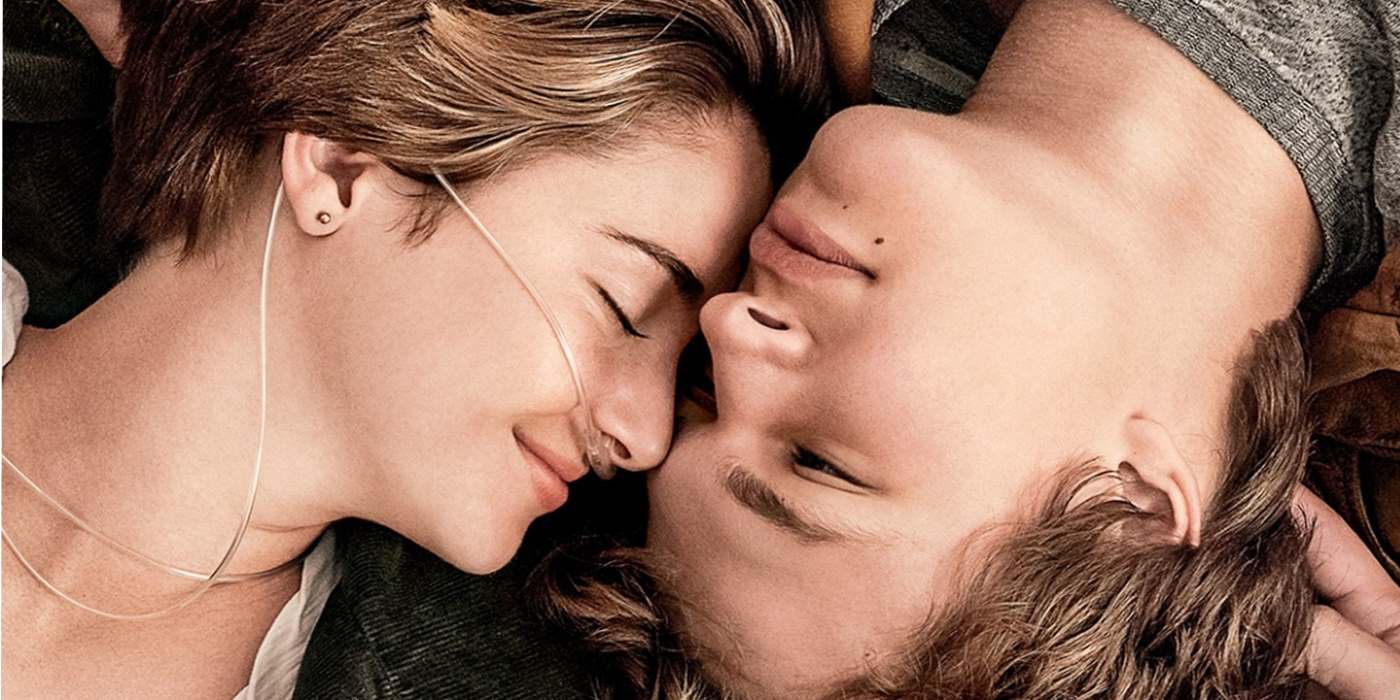 13 Movies like The Fault in Our Stars: Bonds Can’t Be Broken

You can build a wall around yourself, but when the right person comes along, that wall will come crumbling down creating a life-long bond. It’s never too late to find true love, even when it’s your dying wish.Grab a bag-o-popcorn and a big box-o-tissues ‘cause you’re going to need it. Ok, I connect to movies like this, not just tear jerkers, but movies that force you to examine your own life and relationships.

These are a few of my favourite movies similar to ‘The Fault in Our Stars’ that I highly recommend.

Movies Similar to ‘The Fault in Our Stars’…

Our love is like the wind… I can’t see it, but I sure can feel it…

‘A Walk to Remember’ is one of Nicholas Sparks’ first screen adaptations. This one chronicles the life of a terminally ill girl hiding her disease. She desperately wants to fall in love, but doesn’t want to leave behind anyone hurt when she’s gone.

This brave story gives us an endearing twist that will tug at the heart.

SIMILARITY MATCH: 85%
These movies allow love to happen no matter what the consequences and are both beautifully adapted best-selling novels. ‘A Walk to Remember’ has more of a modern day storybook tone.
***
‘Dying Young’ (Joel Schumacher, 1991)

Call me insane, but I’d venture a guess that Gordon would like to warm you up in any way possible…

The title says it all with this movie, but this time it’s a story about a terminal young man, that is desperate for some hope. He hires ‘Julia Roberts’ to take care of him and they eventually fall in love.

This is another movie where emotions run high but love ultimately conquers all.

SIMILARITY MATCH: 75%
Both these films have characters that bond for life, but ‘Dying Young’ also reminds us that all the money in the world cannot take the place of true love.
***
‘If I Stay’ (R.J. Cutler, 2014)

Sometimes you make choices in life, and sometimes choices make you…

‘If I Stay’ beautifully tells the story of a girl trapped in a coma. She must decide whether to let go of life or hold on for love.

Chloë Grace Moretz is mesmerising in this role and the ethereal camera work really sucks you into her world. This is film also touches on life-changing decisions.

SIMILARITY MATCH: 70%
Finding the will to live and making decisions at such a young age can be heart-breaking in both these films. ‘If I Stay’ is a little less down to earth and evokes more of a magical feeling.
***
‘Brian’s Song’ (Buzz Kulik, 1971)

Ernest Hemingway once said “Every true story ends in death.” Well, this is a true story…

Now for something a little different and bit old school, ‘Brian’s Song’ is another movie worth a mention.

This story is about the unbreakable bond between two best friends, even in the face of racism and death.

SIMILARITY MATCH: 65%
Although both are touching, ‘Brian’s Song’ reaches past the tough exterior to expose a manly tenderness we rarely see on screen.
***
‘The Curious Case of Benjamin Button’ (David Fincher, 2008)

Our lives are defined by opportunities; even the ones we miss…

Easily one of the more bizarre movies on the list sees Brad Pitt and Cate Blanchett star as the childhood friends whose lives are continually and romantically intertwined. Sounds pretty normal right? Well, apart from the fact that Pitt was born an old man and ages backwards.

Yeah, that throws a spanner into the works alright!

This is a love story of epic proportions, one with a unique bond that provides some really intriguing circumstances … even if they seem a little creepy at times!

SIMILARITY MATCH: 65%
It’s more fantastical than ‘The Fault in Our Stars’, but once again, an affliction brings people closer together and threatens to tear them apart at the same time.
***
‘The Time Traveller’s Wife’ (Robert Schwentke, 2009)

If you traveled back to then, why couldn’t you have stopped her from getting into that goddamn car?

Another romantic movie with a twist starring Eric Bana as the time traveller who can’t say when he’ll disappear or when he’ll be back.

Obviously, when you fall in love and try to hold down a serious relationship, that can become a bit of an issue! That being said, ‘The Time Traveller’s Wife’ is a real tearjerker of a movie, presenting a romantic bond that is so often thrown into turmoil and disarray by the incredulous circumstance.

SIMILARITY MATCH: 60%
The love story is just as heartfelt and pure (if a little strained at times) as ‘The Fault in Our Stars’, but the circumstances add a whole new meaning to the term “long distance relationship”.
***
‘One Day’ (Lone Scherfig, 2011)

Whatever happens tomorrow, we had today…

Anne Hathaway and Jim Sturgess star in the adorable romance about two college graduates who spend the night together. While at first it might seem like a brief thing between the two of them, the film takes a look at what they get up to on that same day each year, showing the hardships and stress of personal relationships and the careering path life takes as you get older.

You’ll find yourself wondering if there’s going to be a happily ever after for these two and I could tell you … but that would be cheating! Check it out for yourself!

SIMILARITY MATCH: 60%
It’s an intriguing concept no doubt, which makes it seem fresher than ‘The Fault in Our Stars’, but it lacks that certain emotional punch the former dealt.
***

You may be wondering, what are a few other films like ‘The Fault in Our Stars’, well not to worry, I found some I’m sure you’ll love, movies that also have that special connection.

Our life is a series of moments. Let them all go. Moments. All gathering towards this one…

I know I have recommended this movie before, but because it is very similar, I had to bring it up again. Now is Good is the story of a young girl, a bucket list and a ticking time clock. If you want to be inspired to live life to the fullest, this is the movie to watch!

Just like in ‘The Fault in our Stars’, we are encouraged to take that chance, that leap of faith, hang on and enjoy the ride.

Although this movie brings out the big tears, with charming sensitivity it points out that life is about the journey, not the destination.
***
‘As Good As It Gets’ (James L. Brooks, 1997)

As Good As It Gets stars one of the all-time greats, Jack Nicholson. In this movie the main character has put up a barrier, not allowing anyone in.

When he sees his own stubbornness is the cause of his troubles, he finally turns over a new leaf.

Although this movie is about a man fighting his OCD to live a normal life, it still gives a fresh look at old love. We even get to laugh through the tears with this one.
***
‘It’s Kind of a Funny Story’ (Anna Boden, Ryan Fleck, 2010)

Time felt different back then. Like there was more of it…

You might not have heard about this movie, but again here the characters struggle with an illness and relationships. This story is about an unlikely bond between a grown man and a teenager who have both attempted suicide.

Contrary to the title and starring Zach Galifianakis, it’s not really a comedy, but well worth a watch.

Sometimes we can go crazy trying to figure out this life, and it’s good to know we are definitely not alone.
***
‘Beaches’ (Garry Marshall, 1988)

You’re not dead yet: so stop living as if you are!

This list would be incomplete if I didn’t include the movie ‘Beaches’, a highly recommended this movie.

This is the iconic cinematic treasure is about best friends loving each other through thick and thin, overcoming distance, financial heartache and just being there when you are needed most.

‘Beaches’ soars with the wind beneath our wings and reveals the very essence of true friendship.
***
‘Bicentennial Man’ (Chris Columbus, 1999)

I try to make sense of things. Which is why, I guess, I believe in destiny. There must be a reason that I am as I am. There must be…

I don’t care what anybody says, I love this film. It’s the story of an android (played immaculately by Robin Williams) who serves the same family for years, loving them unconditionally. However problems arise when he questions his own existence and decides that he wants to become human.

Some people bash this movie, unfairly I might add. If you’re after a sci-fi story about selfless love and adoration, you can do much worse than this charming tale.

This may seem like a weird choice at first, but I have a feeling you’ll agree with me once you’ve seen the movie.

During World War II in Germany, Liesel and her forster parents shelter a Jewish refugee, Max, in their basement. When Liesel starts to read books to him, an incredible friendship between then two of them emerges.

This film (based on the book of the same name) is not a love story, but it explores the extraordinarily strong bonds that can grow between friends on the one hand, and parents and their children on the other.
***

The Ties that Bind

Making a strong connection to someone can be beautiful, whether it is a best friend or a first love. All these films let us know that it’s ok to take down our guard and be vulnerable. The Universe is on our side, only if we allow it to be.Perhaps you know another great movie like ‘The Fault in Our Stars’, I’m sure there are a few more.

I’d love to hear about them below in the comments.