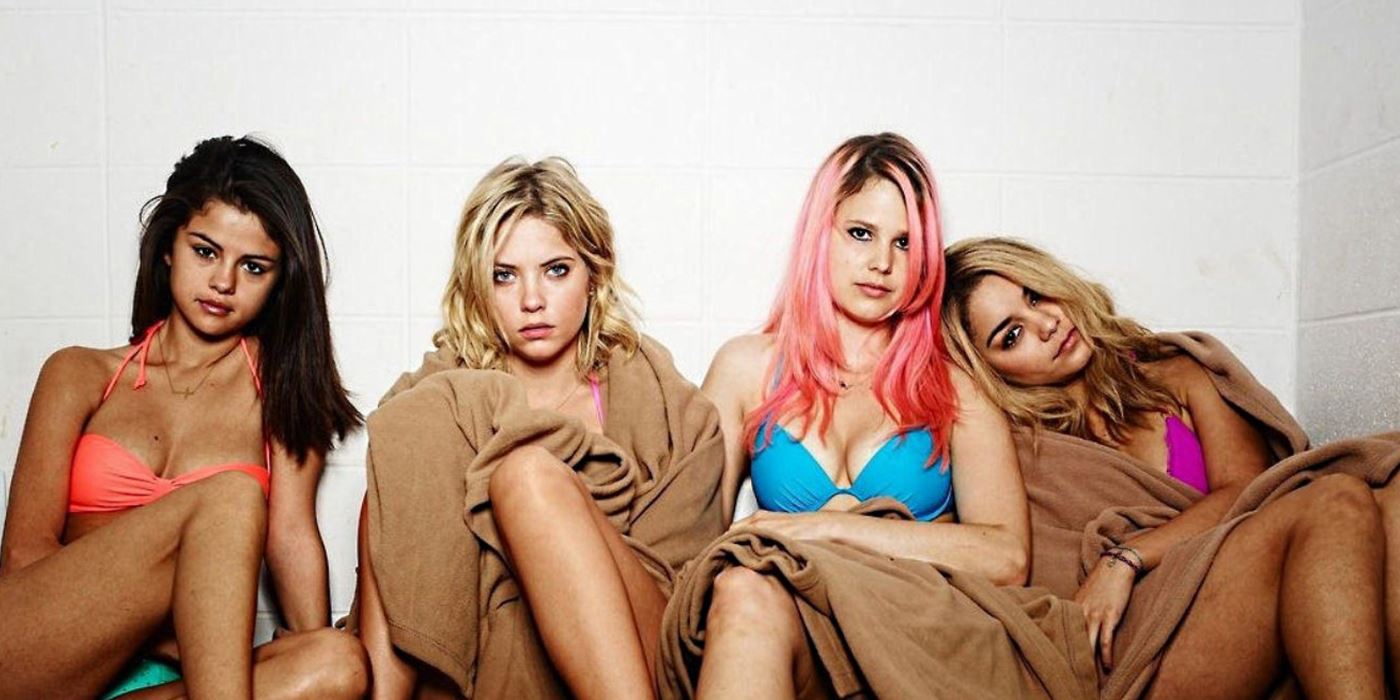 Perhaps not the easiest film to pigeonhole, ‘Spring Breakers’ (Harmony Korine, 2013) is a surrealist foray into contemporary pop culture. But films don’t exist in a vacuum and there are plenty of movies like ‘Spring Breakers’ to satiate your cinematic desires.
~ Andy McKendry

As a Film Studies graduate I feel well placed to comment on contemporary cinema. ‘Spring Breakers’ is a peculiar blend of accessible pop art and more covert symbolism, but its effect is simple visual escapism. Colourful, weird, and exhilarating, it’s a film that offers its own brand of cinematic storytelling. From the Pussy Riot inspired balaclava’s to James Franco’s terrible (but good) cover of Britney Spears, there is something here for members of the millennial generation it so clearly caters for. Here are some great movies similar to ‘Spring Breakers’.
***
‘Drive’ (Nicholas Winding Refyn, 2011)

‘Drive’ is a film about an unnamed stunt driver who moonlights as a getaway driver for criminals operating in LA. He’s a consummate professional and he lives by a simple creed – get in and get out. His life is a clever metaphor for contemporary experiences and he exists in a world replete with references to by gone Americana.

Film can stand as a parable that reflects our lives– in ‘Drive’ it’s down to our hero to lead us out of the mire and towards a safe ending. But in both ‘Drive’ and ‘Spring Breakers’ the suggestion is there in the subtext that there’s no such thing as clean endings and, just like in life, things can get messy.

Also check out this article for more movies like ‘Drive’.

SIMILARITY MATCH: 90%
The tone in ‘Drive’ is methodical and precise, in ‘Spring Breakers’ wild and raucous, but both share a similar desire to reuse and borrow cultural imagery to tell a new story.
***
‘The Bling Ring’ (Sophia Coppola, 2013)

A film that is perhaps not for everybody, ‘The Bling Ring’ deals with a group of fame-obsessed youths that utilise the internet to find famous folks’ homes to rob. It’s a film that comments on the immediacy of contemporary life and it does so with a frenetic and vibrant tone.

In a similar manner to ‘Spring Breakers’, ‘The Bling Ring’ asks questions about what it means to grow up within an obsessive culture that champions fame and celebrity above all else. The product becomes the individual and our wants and desires become insatiable. Both films suggest that we’ll only find happiness in riches and wealth – both wanton and solipsistic desires.

But ‘The Bling Ring’ is not simply a didactic lesson in the dangers of contemporary society. Instead it is a film that revels in the contemporary moment and suggests that living for now may not be the best choice. The past infects the present and begets the future, and somewhere in between we have to reconcile what’s happened with what will. Consequences matter and the characters in ‘The Bling Ring’ are about to learn that lesson the hard way.

SIMILARITY MATCH: 80%
‘Spring Breakers’ and ‘The Bling Ring’ both detail the failings of contemporary society from the perspective of those it affects the most – the youth.
***
‘Go’ (Doug Liman, 1999)

‘Go’ is a poppy blast from the late nineties and its irreverent tone is similar to ‘Spring Breakers’. It’s the generation X equivalent to the millennial orientated ‘Spring Breakers’ and its narrative deals with a drug deal viewed from multiple perspectives.

It stars a young Katie Holmes amongst others and it pushes its central premise as far as it can. ‘Go’ follows a wide subsection of society who are drawn together by drug culture. It shows that drug use isn’t something that belongs to one clique, subsection, or grouping. Instead it affects everyone, and desire knows no class or societal categorisation.

There you have it, four films as promised. If that’s not enough, here are some other films like ‘Spring Breakers’…

‘Morvern Callar’ is a little known Scottish movie from Lynne Ramsay who you may recognise from ‘We Need To Talk About Kevin’ (2011). Her earlier work, however, has some similarities to Korine’s ‘Spring Breakers’, but more in the way that the story unfolds than in any clear reference.

The narrative in ‘Morvern Callar’ follows a woman who finds out that her writer boyfriend committed suicide. She discovers on her computer a finished novel that has yet to be read by anyone other than her. Morally, she should publish the novel under his name posthumously, but instead she opts for a writing career herself and puts her name on it.

It’s an unrealistic narrative and one that takes our hero further and further from the small Scottish world she started off in. She finds, however, that success does not equate to happiness and that lies and criminality will lead to unhappy consequences.

SIMILARITY MATCH: 60%
Not a glitzy exploration of contemporary life like ‘Spring Breakers’, ‘Morvern Callar’ is instead a film that shares a similar moral message.
***

‘Killing Zoe’ is similar in tone and mood to ‘Spring Breakers’ and its exhilarating narrative will leave you breathless.
***
‘Leather, Interior, Bar’ (James Franco, 2014)

Van Sant’s early film details the lives of penniless junkies who rob drugstores to get high.

‘Drugstore Cowboy’ will give you your emotional fix as you watch folks struggle to live happy lives free from drug abuse and insanity.
***

Personally I love ‘Spring Breakers’ and all of the films mentioned above. If I had to recommend one, it would be ‘Drive’. It’s a thrill ride with a brilliant turn from Ryan Gosling – he wouldn’t be where he is today without ‘Drive’.What are your thoughts? Love ‘Spring Breakers’ but feel there’s a film that I missed?