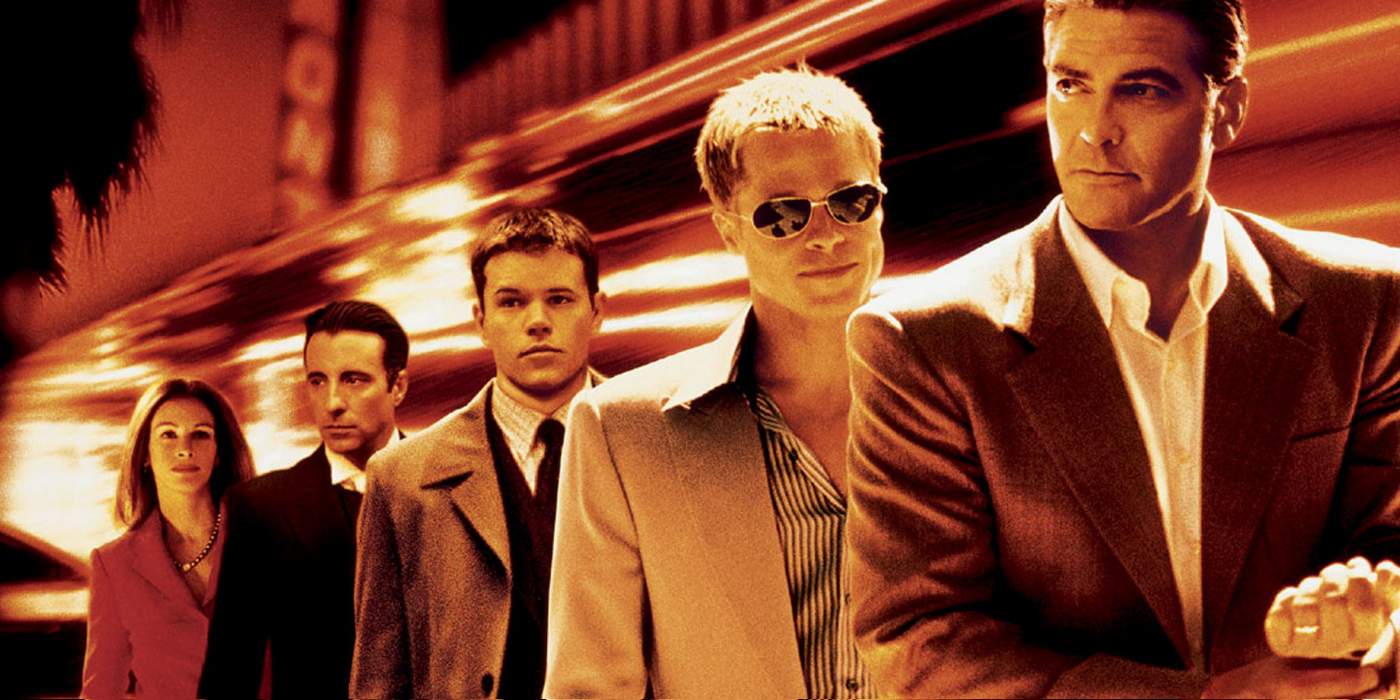 Even a long-standing fan like me found similarities in these movies like Ocean’s 11. Looking for perfectly executed heists? The Thomas Crown Affair and Gambit are two of the best options. ~ Jane Howarth

Which version do you prefer, the new version or the original? I’m kind of partial to the new one, it’s just feels so flawless and perfectly suited to the Las Vegas setting.Some movies like Now You See Me (Louis Leterrier, 2013) play on the illusion side of Vegas outright, but others find that polished dynamic in a totally different setting.
***
‘Out of Sight’ (Steven Soderbergh, 1998)

George Clooney and Jennifer Lopez lead a suitably late-1990s cast for another Steven Soderbergh heist flick, with Clooney playing another ex-con. In this earlier movie, that ex-con is a bank robber who gets caught up with a law enforcer.

As respected critic Roger Ebert said, Out of Sight places a high value on people. Even the main heist has a personal connection, and it’s all the more fascinating for it.

SIMILARITY MATCH: 80%
Like Ocean’s 11, Out of Sight sees a bank robber plan a new job after jail time, albeit with the lack of ensemble changing the dynamic a bit. And of course, Clooney and Soderbergh lend added familiarity.
***
‘The Informant!’ (Steven Soderbergh, 2009)

Matt Damon and director Steven Soderbergh are the obvious links here – but beyond the names, they lend a similar tone to a movie based on a true story.

Corporate life takes a criminal turn when a whistle blower volunteers information to the FBI, but as time goes, his revelations grow more startling.

It’s a movie with a dark sense of humour, and the dodgy dealings side should appeal to heist lovers.

SIMILARITY MATCH: 40%
One guy against the world and himself – he’s no Danny Ocean, but the plot’s twists and turns (and all the money changing hands) should intrigue fans.
***
‘The Thomas Crown Affair’ (John McTiernan, 1999)

A wealthy art thief sets out to steal only the masterpieces he admires. This time, though, a female investigator looks set to derail his plans.
Pierce Brosnan and Rene Russo star in the suitably glossy late-‘90s remake, which looks set for a sequel.

Yes, like the Ocean’s movies, this film sets out to revamp a classic, this time updating Steve McQueen and Faye Dunaway’s The Thomas Crown Affair (Norman Kewison, 1968).

SIMILARITY MATCH: 40%
Without a team, we miss out on personality clash and diversity – but Thomas Crown and his sophisticated world is polished enough to blend with Ocean’s 11.
***

These other movies like Ocean’s 11 take us on a detour into classic British cinema – they’re a little different in setting, but you’ll recognise the format right away.

Michael Caine plays a long-serving thief who puts together a high-value art heist with the help of his hand-picked team. Yes, it does sound like The Italian Job (Peter Collinson, 1969) goes gallery.

The remade Gambit (Michael Hoffman, 2012) casts Colin Firth in the more elegant role of a curator who sets up the heist for revenge, and swaps Hong Kong for Texas.

Maybe it’s just that I’m not a huge Cameron Diaz fan, but I felt like it could have been a great remake if the elements had aligned more neatly. This time, go for the original.

SIMILARITY MATCH: 60%
This Michael Caine movie throws the cheeky Londoner into the art world for a very British take on the Ocean’s 11 format.
***
‘The First Great Train Robbery’ (Michael Crichton, 1978)

Our second vintage pick casts Sean Connery as a Victorian version of Danny Ocean. Our antihero is looking for a new challenge in the form of a very grand heist (the clue’s in the title), and we meet him as he puts together his criminal team.

I’ll admit it is a bit of a wild card, largely thanks to the combination of late 1970s style and 19th Century beards, but this movie’s approach is surprisingly similar to Ocean’s 11.

SIMILARITY MATCH: 40%
Elaborate heist? Yes. Team put together by a magnetic ringleader? Definitely. Shiny Vegas setting? Not so much, but look past the flouncy get-up and you’ll find similar shenanigans.
***

Does a Movie Need the Bellagio to Follow In Ocean’s Footsteps?

Judging by this collection of likeable criminal masterminds, I’d say no. This group’s as diverse as the Ocean’s team.Looking for more? To Catch a Thief (Alfred Hitchcock, 1955) and these other films about heists are just what you’re looking for.

These might be the Ocean’s-style films I’d recommend, but that doesn’t mean the list is complete.Add your own recommendations in the comments.