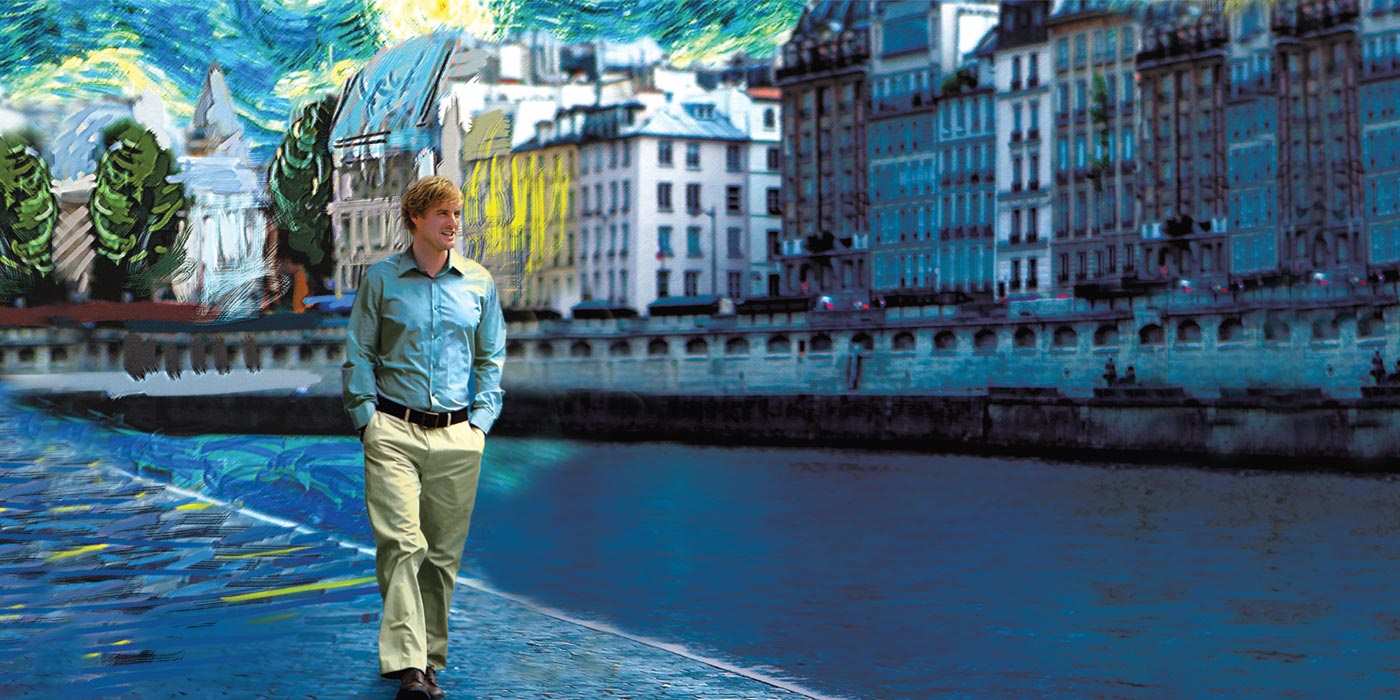 Woody Allen is a notable movie director and has a substantial body of work to support arguments that he is a film auteur. For fans of his work, here are some movies like Midnight in Paris. ~ Andy McKendry

Perhaps Allen’s most enduring work is Annie Hall but the director has made some films recently that are just as enticing and conversational-heavy. One of his latest films, Midnight in Paris, puts a nostalgic screenwriter in contemporary Paris.

However, a late night moment of ‘magic’ leads our hero back in time and to a table of luminary authors like Ernest Hemmingway. Woody Allen is a writer, too, and his work often revolves around the notion of communication.

Here are four films similar to Midnight in Paris and they all share a similar obsession with language utilised in the dissection of contemporary life.

This is the third film in Richard Linklater’s Before trilogy and it closes the book on Jesse and Celine’s love story. Over a decade has passed since the first film, Before Sunrise, and now, the young couple are much older and more world weary. Gone is the romanticism and the easy love that they shared in Vienna in 1995. Now, they’re a couple, married for all intents and purposes, and they have two kids.

Before Midnight deals with the effects of time on a romance and whether or not a love affair can survive its passing. Linklater’s trilogy is touching cinema and like Woody Allen, he loves wordy dialogue and conversation that seeks accuracy and honesty. Julie Delpy and Ethan Hawke reprise their well-known roles as the couple who met on a train all those years ago but they are not quite the same people that they were then.

The Before Trilogy is worth watching in its entirety but in terms of which one is the most similar to Allen’s Midnight in Paris, Before Midnight steals the prize.

SIMILARITY MATCH: 90%
When viewed as a whole, the trilogy is far grander in scope than Midnight in Paris but the individual movies are no less human or relatable.
***
‘You Will Meet a Tall Dark Stranger’ (Woody Allen, 2010)

We’ll start then with another film written and directed by Woody Allen. The narrative follows a couple who after forty years of marriage decide to part ways. The husband takes up with a young call girl and the wife finds herself in a brand new world and one where the reality she understood is increasingly challenged.

Woody Allen is perhaps the best known screenwriter and director when it comes to movies that dissect the nature of love and the various context we use to define it – marriage, flings, and love affairs. His work is notable for its honesty and the humour that it manages to derive from base human emotions. His films often work best because they are relatable, real, and understandable.

Woody Allen has made many films similar to Midnight in Paris but You Will Meet a Tall Dark Stranger is perhaps the most comparable in terms of tone and mood.

SIMILARITY MATCH: 80%
Two films that consider similar moods and share genre tropes, You Will Meet a Tall Dark Stranger is less concerned with plot and more with the relationships its narrative focuses on.
***
‘Fargo’ (Coen Brothers, 1996)

This tale of criminality is a darkly comic journey into ineptitude and brutality driven by the break down of a relationship. Not quite a Woody Allen narrative then and certainly not the same genre as Midnight in Paris, Fargo deals with different problems but ones that are no less human.

The Coen Brothers are well known for their clever scripting and good dialogue and Fargo stands as testament to just how good they are as writers and directors. It’s a great story (adapted for TV last year) and the clever scripting marks it out as a film that is comparable to Allen and his writing.

So this isn’t a love story and it has virtually nothing in common with Midnight in Paris however in terms of wordy and clever dialogue it ranks just as highly as any Woody Allen penned movie. The plot involves a collection of salesman and all of the bravado and arrogance that accompany that profession.

Shot mostly in one room and with dialogue full of expletives, Glengarry Glen Ross is a clever, slow burning comedy drama and in that it finds itself being easily comparable to Midnight in Paris. The acting is great; the scripting even better, and the tight focus ensures that all of the bits of the film that work well are on full display.

SIMILARITY MATCH: 50%
A distinctly different narrative that comes with its own set of tropes; Glengarry Glen Ross is a film that is as wordy as anything by Woody Allen.
***

Here are some more movies if you like Midnight in Paris for you to enjoy.

They all share a similar desire to explore the American dream but each utilises a very different perspective – from generation X, to academic janitors, here are a few more suggestions.

A tale of young love in the early nineties, it captures generation X right on the cusp of adulthood.

Reality Bites captures the same sort of nostalgia for a time gone by as Midnight in Paris.
***
‘American Beauty’ (Sam Mendes, 1999)

A film about the malaise of suburbia, it will remind you of why Kevin Spacey is such a well-considered actor.

A tale of street smarts, academia, and psychological probing, Good Will Hunting is a compelling watch.

All in the Dialogue

Wordy cinema is a niche in and of itself and the above films show that dialogue heavy writing can be found in every genre. Personally I would recommend the Before Trilogy. It’s smart, thoughtful, and poignant.

What do you think?