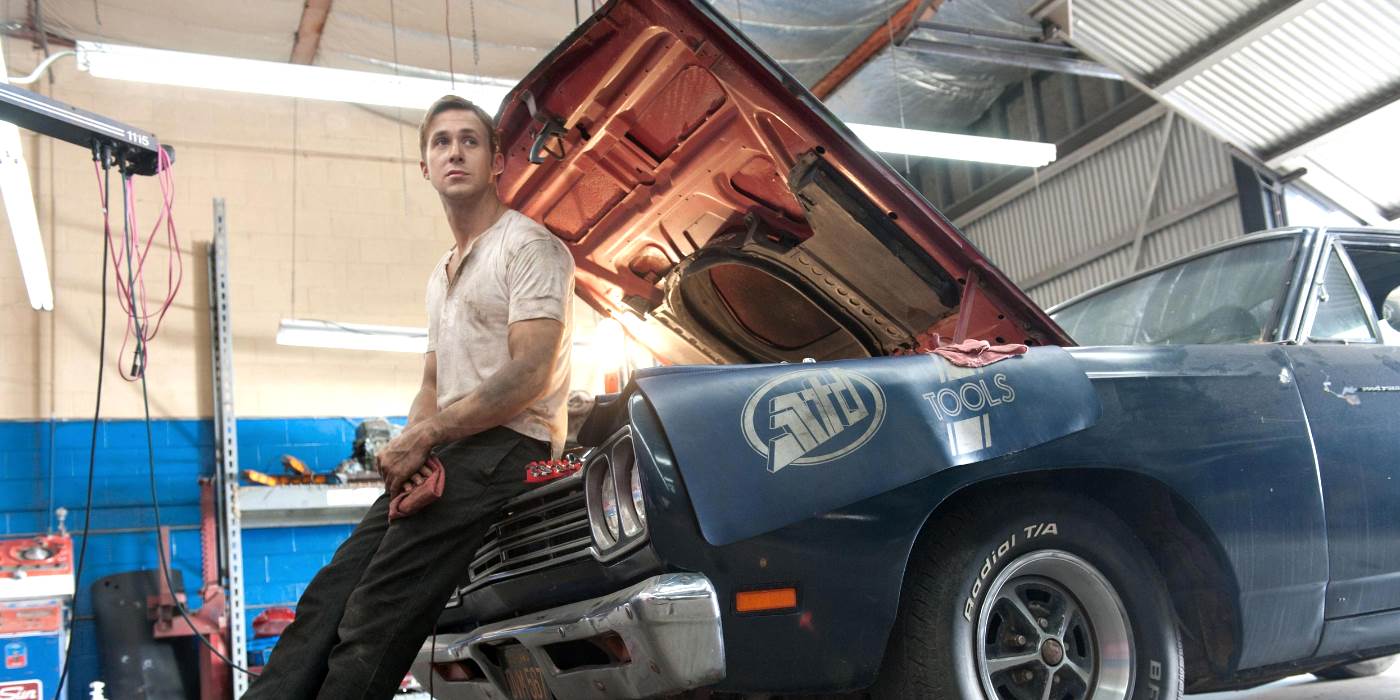 Do you have a soft spot for the strong, silent type? Especially those prone to fits of extreme and over-the-top violence? Then fear not – The Driver, Ghost Dog and Dead Man’s Shoes are great movies like Drive you’re sure to enjoy as well. ~ Jonny Sweet
Since its release in 2011, Nicolas Winding Refn’s Drive has been called many things. A “ton-of-bricks, tour-de-force”.
A “masterpiece of surface over depth”.
An “LA pulp thriller, very brutal, very slick”.
A “stupid movie” which “breaks down under the weight of its own pomposity”.
A “hash of beautiful images”.
A “vacuous spawn of Tarantino… with a really pathetic ending”.Clearly, the film divided opinion. But those who like it, really like it. Maybe it was the righteous indignation of the morally-wronged, trying to redress the imbalance by stamping people’s faces into unrecognisable mush. Maybe it was Ryan Gosling’s pretty-boy reticence, drawing out each prolonged pause in dialogue for as long as humanly possible. Maybe it was the fire of a thousand Western revenge tales manifesting themselves in a stylish and slick thriller. Maybe it was the 80s-esque soundtrack and fantastically atmospheric cinematography.Whatever it was, it did the trick. I loved it. And if you’re reading this article, probably you did, too.
***

Though Drive is a true achievement of effortless style, fortunately, it’s not alone. There are any number of films which share a similar mood to Gosling’s brooding intensity, not least the Westerns and revenge flicks mentioned above (see pretty much anything starring Clint Eastwood, for starters).

Here are five of my personal favourite similar films to Drive, which all do a great job of capturing a similar sense of stoic yet misguided morality in an unforgiving world.

It’s fairly obvious from the opening scene alone that Refn’s film is in part a homage to Hill’s similar tale of a ludicrously-good getaway driver with a devil-may-care attitude and a face to break hearts with.

All the ingredients are there: a main character listed only in the credits as “The Driver”. Said main character played by Hollywood’s pretty-boy of the moment. Said pretty-boy being required to do very little in the way of acting, per se, but lots of enigmatic pauses and long stares. One last job.

But for all their similarities, the movies actually do differ considerably enough to make legal charges for plagiarism inapplicable. Whereas Gosling is on the run from a group of right ruffians, Ryan O’Neal is playing cat and mouse with the excellently-creepy Bruce Dern – the rival gang are a mere afterthought, here.

Similarly, Gosling is far more prone to off-the-cuff savagery than O’Neal, though his relationship with the female lead is no less mysterious.

If you liked Drive, you’ll love The Driver.

SIMILARITY MATCH: 90%
The Driver and Drive are so alike that you would be forgiven for thinking that the latter was an unofficial modern remake of the former.
***
‘Le Samouraï ‘ (Jean-Pierre Melville, 1967)

Now that you are aware of one of Drive’s biggest influences, it’s apt to take a peek at where The Driver itself got its inspiration.

Step forward Jean-Pierre Melville’s Le Samouraï, a French thriller from the 60s, which concerns itself not with a getaway driver but a hired assassin.

Despite this discrepancy, the films are remarkably similar, right down to the silent dignity of its protagonist, his questionable morals, his less-than-airtight alibi and the beautiful femme fatale who emerges as his saviour.

In comparison to Drive, Le Samouraï is at a near half-century disadvantage – and it shows. It lacks the flair and pizzazz of Refn’s effort; it lacks the enchanting cinematography; it lacks the cooler-than-cool soundtrack. But what it lacks in stylish gimmicks, it more than makes up for by being French.

A similarly modern take on the Western revenge genre, Dead Man’s Shoes features a protagonist who also seeks to exact retribution on an organised mob who have wronged those he cares about.

If Gosling’s unpredictable and unexpected outbursts of violence were mildly terrifying, leading man Paddy Considine ramps up the horror to full strength in his portrayal of Richard, which shivered my timbers sufficiently to earn a podium finish in my list of the scariest villains of all time.

Do not miss it.

SIMILARITY MATCH: 70%
Dead Man’s Shoes and Drive both feature unhinged protagonists who wage war against a mob they believed to have wronged them, with violent consequences.
***
‘Ghost Dog’ (Jim Jarmusch, 1999)

The subtitle of Ghost Dog is The Way of the Samurai, so it’s little surprise that this film also owes something to Melville’s classic.

Featuring Forest Whitaker as a delusional Don Quixote-esque assassin who lives by an outdated code in an immoral world, Ghost Dog is a refreshing tale of honour and duty, alternately lightened with ridicule of the mafia and heavily underlined with a genuine nostalgia for simpler times.

Whereas Gosling’s piercing stare might have you melting in your chair, Whitaker’s sad and sometimes vacant gaze only invokes pity and contempt.

SIMILARITY MATCH: 65%
Ghost Dog and Drive both focus on lone wolves in a cruel world who try to do what’s right according to their warped moral codes, even if it means doing some very, very wrong things.
***
‘The Place Beyond the Pines’ (Derek Cianfrance, 2012)

The first thirty minutes of this film might make you think that Mr Cianfrance had been copying Mr Refn’s jotter in scriptwriting class.

Enter Ryan Gosling, a mysterious and tight-lipped stunt driver, who turns to a life of crime in order to buy trinkets for his intended and nappies for her sprog… sound familiar? Don’t worry – things diverge dramatically in the second act.

After the initial flirting with Drive is over, The Place Beyond the Pines stands up as an excellent movie in its own right, covering completely different ground and finishing up in an altogether different genre… but the similarity of its opening gambit was so striking, I decided to include it on the list.

SIMILARITY MATCH: 60%
Like Drive, The Place Beyond the Pines features Ryan Gosling as a stunt-driver who turns to crime… but that’s where the similarities end.
***

Recommend something! If you think I’ve dropped the ball with a glaring omission, set me straight below.

I’d love to hear about other films similar to this “masterpiece of surface over depth”.