See More Results
Home > Movies > Movies Like > 7 Movies like Alice in Wonderland: the Classic and the Quirky 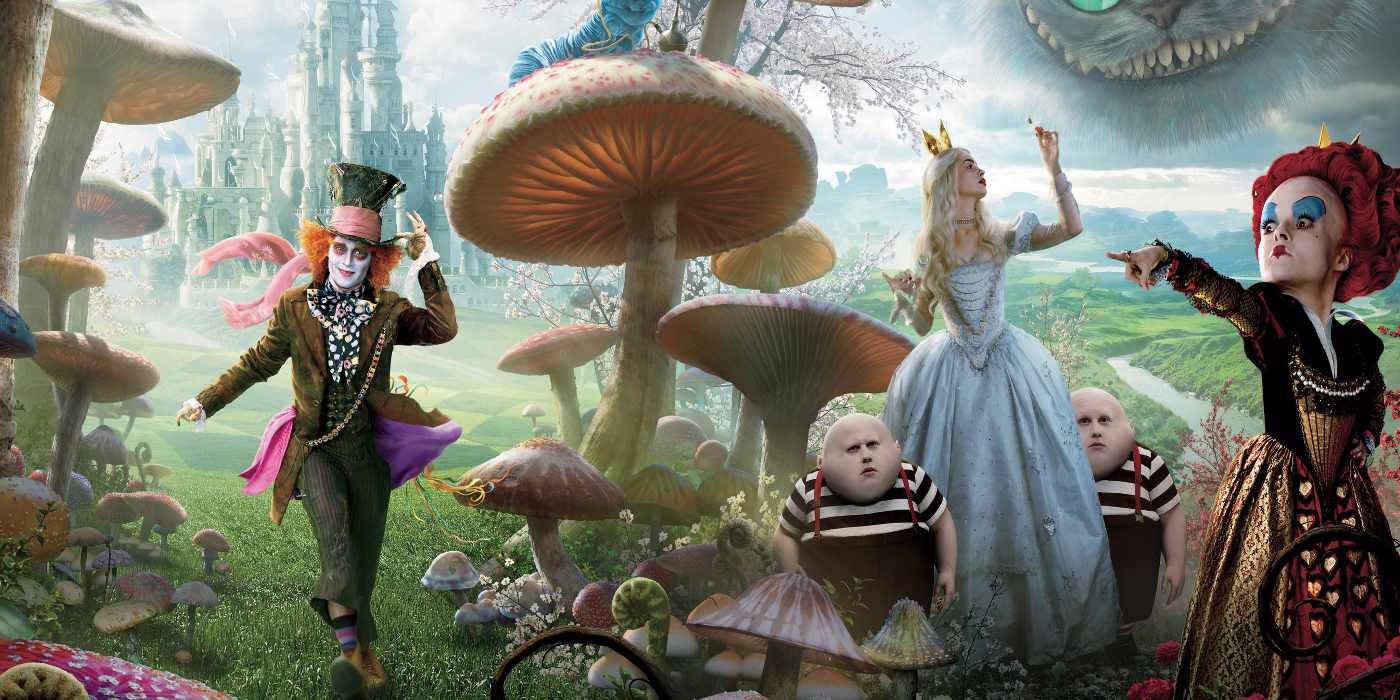 7 Movies like Alice in Wonderland: the Classic and the Quirky

This article has been co-written by Jane Howarth and Paola Bassanese.


Could you spend all day sipping tea in a hand-drawn Wonderland, or is Tim Burton’s trippy Underland the one you’d like to fall into?  Here are our picks for fans of each version – Moomins and the Comet Chase (2010) for Disney devotees, and movies like Coraline (2009), if you’re looking for something a little bit gothic.

More Movies like Alice in Wonderland: Beautiful Animation with a Strange Side by Jane Howarth

Is your Cheshire Cat pink or electric blue?  If it’s the classic pink and purple-framed grin you picture, these movies are for you.

These other movies like Alice in Wonderland (Clyde Geronimi et al., 1951) are charming, beautifully animated… and sometimes weird.  Because that’s what we’re all here for, right?

If you’re rather in the mood for a book, check out these books like ‘Alice in Wonderland’.

Peter Pan, the tale of the boy who never grew up, might have been reincarnated as many times as Alice – look at all these movie adaptations! But Disney’s animated versions of both classic stories definitely belong to the same universe.

Alice’s voice actor Kathryn Beaumont speaks for Wendy, while, behind the scenes, the movies share directors, animators and Mary Blair’s distinctive concept art (the original artwork for Alice is beautiful).

Themes of growing up and separating fantasy from reality, those ordinary beginnings and enchanted lands – a definite must-see for Alice fans.

I’m sorry guys, I can’t help it.  Cat photos, videos, pictures of cute neighbourhood pets – you name it, my family have sat through the slide-show of it.

So, I’m very excited to present the most cat-centric anime I’ve uncovered so far (but if you know any more, tell me – seriously).

A young girl, Haru, saves a cat’s life, and finds herself drawn into kitty politics. Will she have to marry Lune, Prince of the Cat Kingdom? Spend the rest of her life in pointy-eared feline form? Aha, that would be telling…

Studio Ghibli are known for their beautiful hand-drawn animation – more on their best movies here – and their talent for imaginative stories.

This one’s no exception – if you appreciated Alice’s conflict between wanting to escape boring everyday life and feeling trapped in a world that’s unbelievably magical but kind of life-endangering, I think you’ll get right into The Cat Returns.

Ichabod Crane races to escape a headless horseman, while Toad of Toad Hall lets a whim get the better of him – think Queen of Hearts in amphibious form, with a motor car.

We arrive in a live-action library, before stepping inside those beautifully animated pages

Disney’s version of the very British The Wind and the Willows (Kenneth Grahame, 1908) is read by Basil Rathbone, followed by American classic The Legend of Sleepy Hollow (Washington Irving, 1820), narrated by Bing Crosby.

Another animation inspired by Mary Blair’s concept art, The Adventures of Ichabod and Mr Toad is a movie worth discovering.

Based on one of Tove Jansson’s beloved books, a comet threatens to strike Moomin Valley.  The Finn Family Moomintroll pack up and go in search of the facts, meeting new friends along the way.

While the bright flowers, blue seas and cast of creatures remind me a lot of Alice’s multi-coloured Wonderland ­– even if nobody’s painting the roses red in this movie – the aesthetics of Moomins and the Comet Chase are something special.

The movie’s making-of story is pretty unusual – it was crafted from recycled ‘70s stop-motion TV episodes, tidied up, redubbed, and finally those little fuzzy guys were let loose for 21st Century viewers.

And even though the characters are thoughtful and sometimes a little melancholy, they’re so, so fuzzy. Don’t you just want to pat them?

Alice in Wonderland is so beautiful and strange, and that’s exactly the feeling these movies give me.

One moment they’re impossibly lovely and sweet, the next they’re kind of scary – but they always leave me feeling like I’ve just got back from an amazing journey.

Where will Paola’s movies like Tim Burton’s Alice take us? Keep on reading for Movies like Alice in Wonderland !

It was fascinating to learn that in the 1953 Peter Pan film the same actress who did the voiceover for Wendy also lent her voice to Disney’s Alice animated movie.

With at least 12 film versions of Alice in Wonderland  (24 if you include homages) since 1933 (or 1910 if you include the first short silent film on Alice), there’s plenty of choice if you enjoy either the more faithful movie adaptations of Lewis Carrol‘s book, or just want to take a flight of fantasy.

24 Film Versions of Alice in Wonderland

Where can you find any more weird movies like Alice in Wonderland?

Do you like Tim Burton? He did an excellent job with his version of Alice in Wonderland. More on him and why he is so unique here.

Here’s a handy selection of three movies like Tim Burton‘s Alice in Wonderland which I think you’ll enjoy.

Coraline could have easily been a Tim Burton stop-animation movie.

Based on Neil Gaiman‘s fantasy horror novella winner of the 2002 Bram Stoker Award for Best Work for Young Readers, Coraline has plenty of similarities to Lewis Carroll‘s Alice’s Adventures in Wonderland.

Coraline is a young girl whose parents are too busy working to really notice her. One day Coraline enters an alternative, fantasy world through a small door in the wall but all that glitters ain’t gold and soon finds out that her alternative parents (Other Mother and Other Father) have a dark side (and buttons for eyes). “Be careful what you wish for”, as they say…

Any self-respecting gothic story must take place at night: it is in fact at night that Coraline can escape her rather boring life and dive into the Other World where she meets the most extraordinary characters.

The classic Snow White fairytale was given a gritty makeover with the remarkably scruffy Kirsten Stewart as Snow White (check out her dirty nails throughout the film – she has to climb mountains, run obstacle courses, avoid drowning… No time for manicures).

The atmosphere of Snow White and the Huntsman is similar to Tim Burton‘s Alice in Wonderland – the colours may be more muted, but the same sense of eeriness is there. The film is produced by Joe Roth who worked on both films as well as Disney’s Maleficent.

“Beauty is my power”

Charlize Theron plays a great villain as the Evil Queen (“beauty is my power”) – I would say this film is pretty much worth watching for her performance alone.

The Huntsman (Chris Hemworth) is summoned by the Evil Queen to kill Snow White, but when he finds her in the Dark Forest, agrees to help her escape in exchange for money. You can’t trust these mercenaries… and if you want a thing done well, do it yourself, so off the Evil Queen goes to get the job done.

The photography is excellent and the storytelling is gripping, so if you like your gothic tales this is for you

Big Fish is the story based on the Daniel Wallace novel about a father-son relationship.

Understanding his father’s colourful and incredible life is Ed Bloom‘s obsession, he enters a fantasy world where anything is possible.

The father is played by Ewan McGregon as a young man and Albert Finney as an old man. Worth watching also because this film is the Who’s Who of Hollywood: cast members include Marion Cotillard, Danny deVito, Jessica Lange, Helena Bonham Carter (obviously!) and Steve Buscemi.

Can you separate fact from fiction?

Fact and fiction collide and it’s not really important to work out which is which, but just enjoy the ride and experience a sense of wonder.

Tim Burton likes his themes and archetypes – and just like you have a witch and a blonde heroine in Alice in Wonderland, you get them in Big Fish too.

Which Film Similar to Alice in Wonderland Will You Choose?

What type of experience are you choosing today?

A flight of fancy with colourful cartoons or real actors in surreal circumstances? Anime or stop-animation? You decide!

Or any more trippy movies like Alice in Wonderland?

Please leave your comments below!