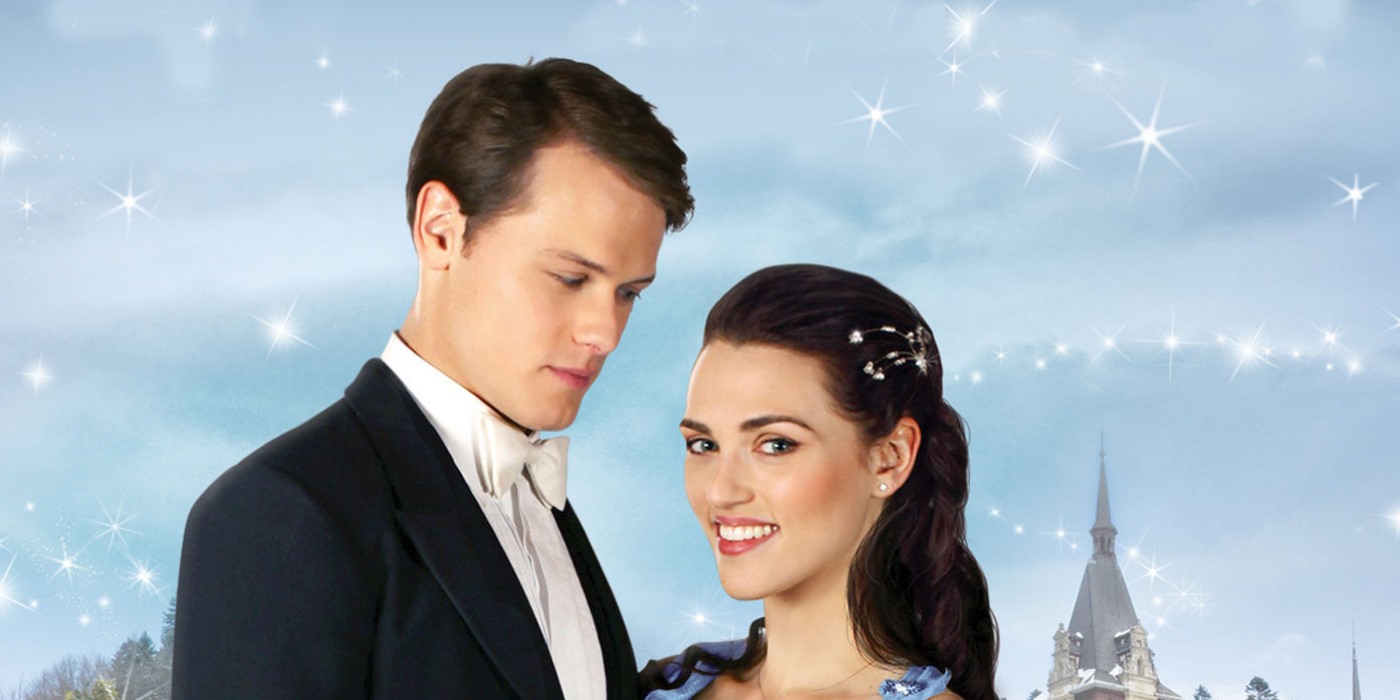 A Princess for Christmas (Michael Damian, 2011) defines that warm, fuzzy Hallmark movie feeling, but which other movies should you wrap gifts in front of? A Christmas Kiss and The Sound of Music are two of my cosy choices. ~ Jane Howarth

Jules Daly: I thought butlers were extinct.
Paisley Winterbottom: Oh, no. We’ve made a comeback.

It’s got a super cute plot, tons of sparkle and an impressive cast.

Katie McGrath of Merlin (Julian Jones et al., 2008-2012) stars, Roger Moore does a grumpy turn as the children’s grandfather and… wait a moment, is that Outlander’s (Ronald D. Moore, 2014-) Sam Heughan as the prince?

And don’t forget the stunning castle, one of the most magical elements of the movie (even the cast were impressed by it).

So, I’m looking for something similar from movies like A Princess for Christmas – holiday spirit, a whole lot of sweetness and a little magic.

Movies Similar to ‘A Princess for Christmas’

Women are like teabags. You don’t know how strong they are until you put them in hot water.

In another snuggly Hallmark movie, a single mother works against the odds to find a home for her family and give them the Christmas they deserve.

Kristy Swanson and Gilmore Girls’ (Amy Sherman-Palladino, 2000-2007) Edward Hermann star. But apart from the irresistible draw of any Gilmore Girls connection, there’s something else I love about this movie.

It was shot on location in Utah, so that lovely, deep snow everywhere? It’s all real, and that’s pretty magical.

SIMILARITY MATCH: 80%
Picture the start of A Princess for Christmas, and you’ve got the mood of this film – with a little more emphasis on the simple things.
***
‘A Christmas Kiss’ (John Stimpson, 2011)

It is the type of kiss that, years from now when I am suffering from dementia and drooling in my jell-o – I will be thinking about that kiss.

Laura Breckenridge’s Wendy, an interior designer, finds herself caught in a spur of the moment kiss with Brendan Fehr’s Adam who, unbeknown to her, is the wealthy boyfriend of her client.

Like A Princess for Christmas, there’s an element of class comedy and the obligatory crossed wires, but equally A Christmas Kiss delivers on those cute moments as the pair help each other to rediscover wonderful traditions. If you love a good Christmas tree, you’ll be a happy bunny.

But my personal favourite thing about this movie? The soundtrack. Featuring twinkly carols and extracts from The Nutcracker, it’s a total delight.

SIMILARITY MATCH: 80%
Class mismatches, misunderstandings and extravagant Christmas decorations that’ll make you want to add another string of fairy lights to your own display – it’s a wonderful match.
***
‘A Nanny for Christmas’ (Michael Feifer, 2010)

Emmanuelle Vaugier, Dean Cain, Cynthia Gibb and Richard Ruccolo star in this cute Beverly Hills set holiday movie. An unemployed former high flyer accidentally interviews for a nanny position – she’s offered the job and realises the mistake, but hey, she could use the money.

Does she know the first thing about being a nanny? Not really. But she and the kids get along great and have tons of fun adventures, and as if that wasn’t enough, she starts to fall for an ad executive.

How about some heartwarming musicals? They aren’t completely Christmassy (well, one of them is, but the other, not so much) but they’re perfect to watch on a December afternoon.

In 1930s New York, the red-haired orphan and her friends try to beat the scheming orphanage owner, Miss Hannigan.

Created for Disney’s ABC and directed by musical veteran Rob Marshall, this Emmy award winning version of Annie is probably my favourite.

Not similar in plot, but the rags to riches story and festive setting should give A Princess for Christmas fans the warm fuzzies.
***
‘The Sound of Music’ (Robert Wise, 1965)

When the Lord closes a door, somewhere He opens a window.

A nun is sent to take care of a captain’s seven children after the death of their mother, and sets about bringing a little fun and music into their lives.

When I first saw A Princess for Christmas, I couldn’t help thinking of The Sound of Music. The mountaintop castle reminded me of Salzburg, the contrast between playful and stiff characters conjured Captain Von Trapp and Maria’s standoffs, and the ballroom scenes could be related.

Re-watch both movies and tell me if you agree!

No Christmassy moments, but the beautiful ballroom scenes and a mismatched family should put The Sound of Music high on A Princess for Christmas fans’ list.
***

Feeling Sparkly and Festive Yet?

Just because it’s Christmas, why don’t you make sure there’s nothing left in the stocking? Aha, here they are! A few more magical movies for you.You’ll find The Prince and Me (Martha Coolidge, 2004) and other films like The Princess Diaries (Garry Marshall, 2001) right here, and have you seen Ice Princess (Tim Fywell, 2005) and these sweet princess movies too? I think you’ll love ‘em.

I just know there are more films like A Princess for Christmas out there, so which ones would you recommend?

Tell us all about them in the comments, and have a magical Christmas!