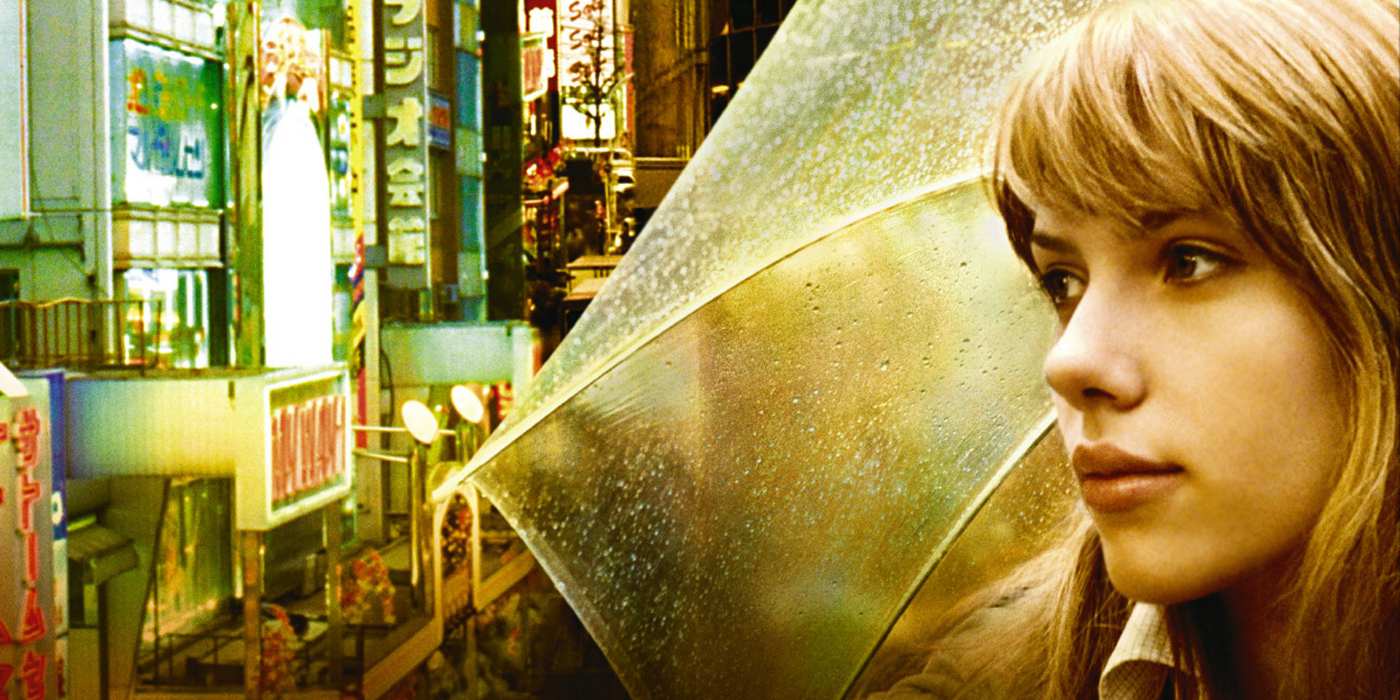 Are you happiest when watching unhappy people trying to find happiness? For more great movies like ‘Lost in Translation’, try watching ‘Her (2013)’, ‘Me and You and Everyone We Know (2005)’ or ‘Amélie (2001)’. ~ Jonny Sweet
‘Lost in Translation’ was the second feature film from director Sofia Coppola and a fantastic exploration of how lonely a person can become, even when involved in a seemingly idyllic marriage, surrounded by as many people as there are in the thriving metropolis of Tokyo.

Both ‘Bob’ and ‘Charlotte’ are in Tokyo for longer than they want to be and are concerned that their marriages are not turning out as they had hoped. Surprisingly, they find solace – or at least some semblance of it – in each other.

At one time in the film, Bill Murray’s ‘Bob’ utters some sage advice to his young companion: “The more you know who you are, and what you want, the less you let things upset you.” By the end of the film, they may not know exactly who they are or what they want, but they certainly have a better idea of what they don’t want.

What Are Some Movies Similar to Lost in Translation?

Films like this, which involve much soul-searching and loneliness, can be depressing, but they can also be reassuring and uplifting.

For fans of the genre, I have compiled a short list of six films similar to ‘Lost in Translation’… and to avoid guiding you to the brink of despair and leaving you there, they are listed in descending order of depression: saddest first and most positive last.

‘Her’ is the story of ‘Theodore’, a lonely writer who, emerging from a broken marriage and finding himself alienated in an increasingly anti-social world, seeks solace and romance in his newly purchased operating system. It also might be the saddest film I have ever seen.

The sadness behind ‘Her’ lies in its bleak (yet realistic) depiction of a world where ‘Theodore’ earns his living by writing personal messages for people he has never met and who have neither the time nor inclination to express their feelings or engage with their loved ones.

Furthermore, ‘Theodore’ is far from a stereotypical sad-case; he’s socially functional and even charming on the one date we see him go on – it is the world, as well as the insanely advanced technology in it, that dictates Theodore’s lonely fate.

Interestingly, there is another link between the two films: Jonze and Coppola were actually married for four years, and many see ‘Lost in Translation’ as Coppola’s expression of her frustration with their marriage. In this context, ‘Her’ can be seen as Jonze’s reply.

For further insight on this topic, I suggest the illuminating article found here.

SIMILARITY MATCH: 80%
‘Her’ can be viewed as Spike Jonze’s cinematic response to Sofia Coppola’s ‘Lost in Translation’, with both films making subtle comments about the pair’s off-screen relationship.
***
`Ghost World´ (Terry Zwigoff, 2001)

Johansson makes an early appearance in Hollywood in this quirky and melancholy drama about a reclusive man (Steve Buscemi) who tries to find companionship through a lonely hearts column, only to find it an unorthodox source.

Two teenage girls answer the ad, initially out of adolescent spite, but one of them (Thora Birch) begins a genuine friendship with him.

The sadness and aimlessness of Buscemi’s ‘Seymour’ will evoke sympathy and empathy from similarly lost souls, and though he ends the film in no better position than he began it, there is a spark of hope to be found in the evolution of Birch’s ‘Enid’.

SIMILARITY MATCH: 70%
While both ‘Lost in Translation’ and ‘Ghost World’ deal with loneliness and disillusionment using mild black humour, their protagonists are of very different ages and circumstances.
***
`Sideways´ (Alexander Payne, 2004)

A smart and wry black comedy about relationships and commitment, ‘Sideways’ features another unhappy man (Paul Giamatti) coming to terms with his failed marriage and his engaged friend who has last-minute doubts about embarking on his own nuptial journey.

Both cynical and optimistic (forgive the apparent oxymoron), ‘Sideways’ is a great film for those who like wine, dark humour and Paul Giamatti.

SIMILARITY MATCH: 65%
‘Sideways’ shares similar themes of struggling for direction, happiness and holiday romances with Lost in Translation’. Though both treat these struggles with black humour, they take place in very different locations and circumstances.
***
`Amélie´ (Jean-Pierre Jeunet, 2001)

The polar opposite of ‘Her’, ‘Amélie’ manages to combine elements of loneliness, quirkiness and uplifting sentiments without coming off cheesy or contrived.

Audrey Tautou is adorable as the titular character who seeks to bring joy and mischief to the lives of those around her and finds her own happiness in the process.

With Yann Tiersen’s excellent soundtrack, coupled with Jeunet’s flawless direction, the movie is a French masterpiece that will restore your faith in humanity, cinema, and life.

A rom-com in the least traditional sense of the term.

Check out this article for more films like ‘Amélie’.

SIMILARITY MATCH: 65%
‘Amelie’ and ‘Lost in Translation’ both feature female protagonists who are looking for love or meaning – or at least something more – from their lives. The former, however, is far more playful and light-hearted than the latter.
***
`Me and You and Everyone We Know´ (Miranda July, 2005)

Written and directed by its star, Miranda July, ‘Me and You’ is the story of a burgeoning performance artist who struggles to make friends… until she meets a shoe salesman struggling to deal with his broken marriage and manage his two sons.

Featuring a great soundtrack and some fantastic cinematography, the film explores themes of loneliness, innocence and its development into experience. This evolution, often depicted as mankind’s “fall”, is portrayed as natural and okay.

The film also features a delightful child character, ‘Robby’, whose lines and deadpan delivery will have you rolling on the floor in laughter.

By the way, if you enjoy these two, check out the other eight in this article about films similar to Wes Anderson’s ‘Canon’.

SIMILARITY MATCH: 60%
‘Lost in Translation’ and ‘Me and You and Everyone We Know’ are both about adults trying to grow up and find their place in the world, though the former deals with the accruement of experience and the latter with the struggle to retain innocence.
***
`Melancholia´ (Lars von Trier, 2011)

If ‘Her’ is the saddest film I’ve seen, ‘Melancholia’ can’t be far behind. Here, von Trier presents a bleak vision of an apocalyptic world, combined with a manic-depressive bride’s struggle to come to terms with her illness and her fledging marriage.

Shot with beautiful imagery, the film stuns, awes and depresses in equal measures. Kirsten Dunst’s ‘Justine’ is comparable to Scarlett Johansson’s ‘Charlotte’ in her dissatisfaction with her recent marriage, though ‘Justine’ may be somewhat of a caricature of ‘Charlotte’, since she takes her disillusionment of the world to new extremes.

Not one to watch before a night out.

SIMILARITY MATCH: 60%
Both ‘Lost in Translation’ and ‘Melancholia’ feature newlyweds disillusioned with married life. Whereas former is laden with sadness undercut by optimism, the latter is beautifully bleak.
***

What Got Lost in Transcription?

Which titles did I miss when penning this article?

There are many others I could have gone for which fit the “lonely human seeks solace in other lonely human” category; point out which ones exactly in the comments section below if you so desire.

You never know: it might just help other fans of lonely cinema to discover something new!