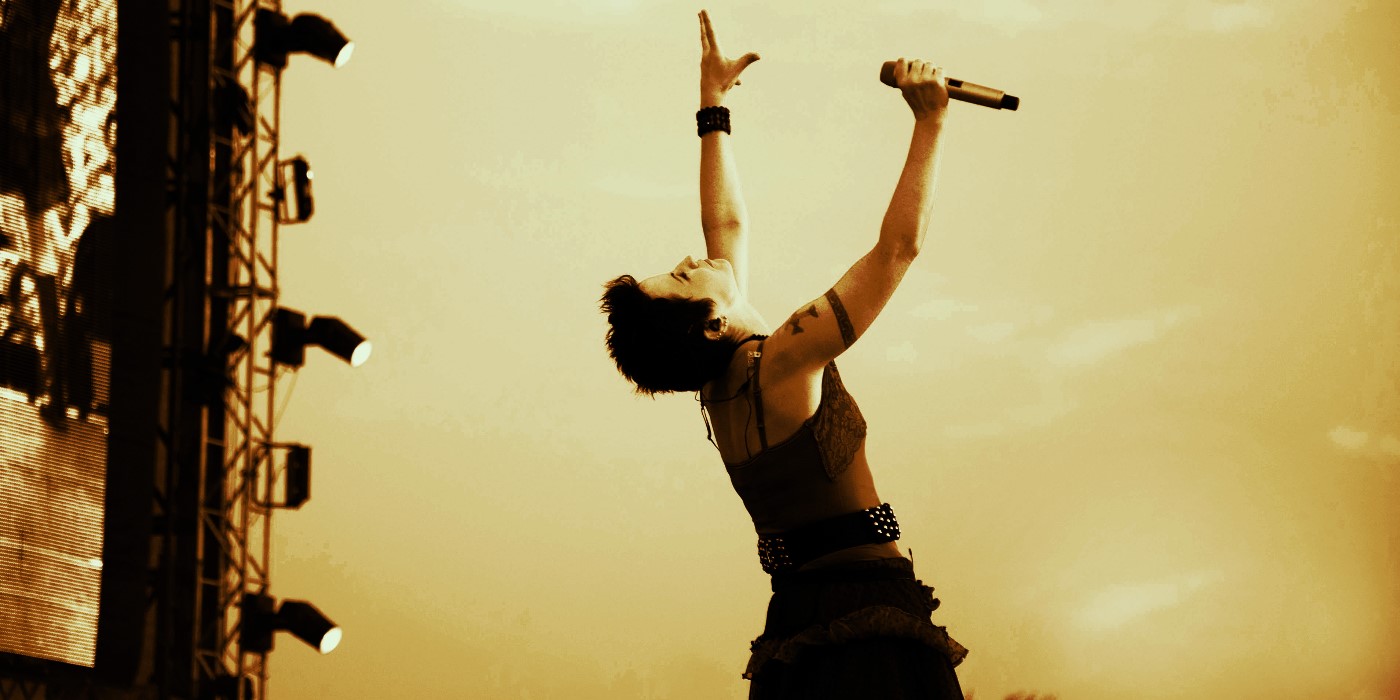 Ten of the Best Female Singers from the 90s – A Bitchin’ Playlist!

When I think of music in the 90’s, I can’t help but think of The Spice Girls craze. Obviously this was THE band for all girls between seven and fourteen. Once our taste in music started maturing, we abandoned groups like The Spice Girls and All Saints and moved on to the real women of the 90s: Johnette Napolitano (Concrete Blonde), Alanis Morissette, Shirley Manson (Garbage), PJ Harvey, Anouk, Patti Smith, Erykah Badu, Tracy Chapman, Lauryn Hill and Dolores O’Riordan.By Roxanne Sancto

Let’s have ourselves a theme party to celebrate the most amazing female singers from the 90s! So strap on your G-Shocks, get out your Tamagotchi and put on those inline skates – We’re going to travel back to the nineties for some bitchin’ girlie rock!

Singer Johnette Napolitano and her band Concrete Blonde really knew how to ring into the nineties with their darkly brilliant album Bloodletting (1990). The overall haunted atmosphere of the album is balanced with beautifully heartfelt ballads like Caroline and Tomorrow, Wendy.

Johnette’s vocal style is unique in that she can easily surf back and forth between deep, harsh vocals needed to truly rock (Bloodletting, The Sky is a Poisonous Garden and I Don’t Need a Hero), and a soft, melodic voice for tender ballads (Joey and Mexican Moon).

Johnette has collaborated with a number of bands including the Talking Heads and has contributed music to movies and shows like The Sopranos, The Texas Chainsaw Massacre 2 and Point Break. Tattoo artist Kat Von D has named Johnette as one of her biggest inspirations and has a portrait of her tattooed on her stomach.

If you missed out on Alanis Morissette’s infamous Jagged Little Pill (1995), you clearly weren’t quite as hip of a 90s MTV child as I expected you to be. The nineties wouldn’t have been the same without screaming, singing and shouting along to the likes of Ironic…You know: It’s like raaaaaaiaaaaaaaain, on your wedding daaaaay!

Not only was Jagged Little Pill the perfect salute to female angst and philosophies, it also counts as one of the best “break-up” albums of all times. Yes, you heard right: If you’re really hating on your ex, the best cure is the song You Oughtta Know – complete with foul words and oozing revenge.

But it’s not all negative; songs like Hand in My Pocket and You Learn spread a positive message of acceptance and a c’est la vie attitude.

If you’re only happy when it rains and tend to think you’re paranoid, Shirley Manson from Garbage should be your kind of gal. Shirley first started her musical career with the Scottish band Goodbye Mr. Mackenzie.

When Butch Vig and Duke Erikson from the already existing band Garbage caught the video to Suffocate Me on MTV, they invited Shirley to sing on a few tracks. They started working together in 1994 and recorded their debut album Garbage together.

While Garbage (1995) is a great album, my heart lies with Version 2.0 (1998) which features some of my all-time favourite songs like The Trick Is To Keep Breathing, I Think I’m Paranoid and You Look So Fine.

She first started out with the band Automatic Dlamini in 1988 for whom she provided vocals, guitar and saxophone. She is a modest multi-instrumentalist and also plays the organ, piano, harmonica, autoharp and the bass.

Her 1998 album Is This Desire? proves her musical versatility in that it is a lot softer and electronically inclined compared to her previous albums which focus heavily on roaring guitar sounds. In 2004, she stated that this is the album she is most proud of, and we totally get why!

I know we’re strictly talking nineties here, but I can’t help myself: Please broaden your Harvey-esque horizon by also giving Uh Huh Her (2004) and her most recent album Let England Shake (2011) a listen.

I still don’t understand why Anouk never quite managed her break-through in the UK or the US, but all I can say is it’s their loss. This beautiful Dutch blonde has provided me with a soundtrack for my teen years.

Admittedly, her last three albums didn’t impress me much and it actually pains me to say it. But man did she rock the nineties and the early 2000s! Her debut album Together Alone (1997) featured some of her best work including Nobody’s Wife, It’s So Hard, Sacrifice and Pictures on Your Skin.

Her follow up album Urban Solitude (1999) saw little Roxy dancing through the room like a possessed maniac; songs like R U Kiddin’ Me, U Being U and The Dark inspired dance freak outs all over Holland, Germany and Belgium.

If you’re looking for the top 90s songs by female artists, you’ll want to start with Anouk!

Patti Smith has been an icon of the music industry since the early seventies.

The album that first hypnotised my ear drums was the 1975 album Horses and I am pleased to say that she has just announced that she will be celebrating its 40th Anniversary next year.

During the nineties, Patti faced an extremely difficult period. Her husband Fred Smith passed away on November 4th, 1994 and was followed by her brother Todd and The Patti Smith Group’s keyboard player Richard Stole.

She soon decided to move back to New York and surround herself with friends like Allen Ginsberg and Bob Dylan. Having found acceptance and new inspiration, she recorded Gone Again (1996), which features the beautiful song About a Boy, a tribute to Kurt Cobain.

Erykah Badu was raised by her single mother who worked as an actress on theatrical productions. Erykah followed in her mother’s footsteps when she was just four years old and joined her on stage.

By the time she was fourteen she was freestyling on a radio station and soon caught the attention of Kedar Massenburg, the president of Motown Records. He hooked her up with D’Angelo to record the single Your Precious Love.

Her first album Baduizm (1997) featured tracks like On & On, Next Lifetime and No Love. Some of the tracks were taken from her demo Country Cousins, others were written in collaboration with The Roots and Questlove.

Erykah was one of the most influential female singers of the 90s and continues to mesmerize her audience with her soulful style and presence.

When she was just three years old, Tracy Chapman started playing the Ukulele. By the time she started attending college, she would go out busking with her guitar and playing local clubs. It was her that she attracted the attention of Brian Koppelman, who’s Dad ran SBK Publishing.

She released her first album Tracy Chapman in 1988. It featured the heart-warming and nostalgic song Fast Car, which was ranked number 167 on Rolling Stone’s “The 500 Greatest Songs of All Time”.

Her 1995 album New Beginning is another proof of Chapman’s impeccable song writing skills and her ability to sneak herself into the hearts of her captivated listeners.

We first got to know Lauryn Hill as Rita Watson in Sister Act 2: Back In The Habit.  Impressed by her vocal skills, Pras Michel asked her to form a band with him, which his cousin Wyclef Jean joined shortly after. They called themselves The Fugees.

They released their first album Blunted on Reality in 1994, but it wasn’t until they released the Grammy Award winning The Score (1996) that they reached international success. Songs like Ready or Not and Fu-Gee-La became anthems of the nineties.

Her first solo album The Miseducation of Lauryn Hill (1998) is absolutely amazing and I can listen to it over and over again. It’s a melodic autobiography in which Lauryn Hill shares some of her deepest thoughts. But it’s not all serious – she managed to throw a little Doo Wop in there as well.

When Dolores O’Riordan auditioned for The Cranberry Saw Us in 1990, she probably never would have expected they would rise to fame as quickly as they did. Their first album Everybody Else is Doing It, So Why Can’t We? (1993) reached number one in the UK.

Seems as though once they dropped part of their name and became The Cranberries, everything fell into place. Their second album No Need To Argue, featured the classic Zombie and Ode To My Family, both of which show a new side of Dolores’s vocal ranges.

This heavy-accented Irish lady is a real fire cracker on stage and knows how to get her audience to move.

Who Would You Add To The 90s Female Singers List?

There were plenty more brilliant female singers in the nineties, but obviously we couldn’t name them all. So it’s up to you now: Who else deserves a place in this list?