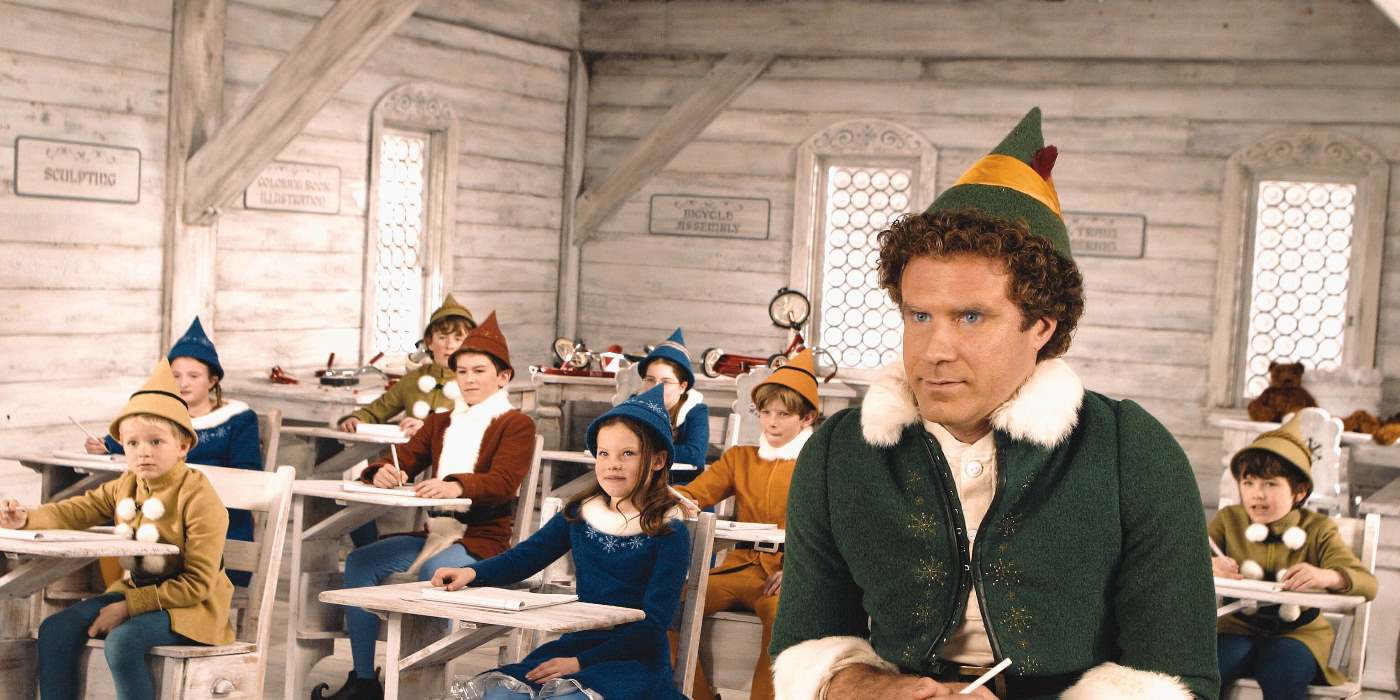 Let’s face it: Elf is one of a kind. Trying to find Christmas movies like Elf is almost impossible – and with absolutely zero chance of an Elf 2 sequel, we have to use our imagination and go on a Christmas quest for a good story. ~ Paola Bassanese

The Guardian defined Elf as being “like a royal wedding for republicans, or the Olympics for people who don’t understand sport”.

Elf is a Christmas institution!

What’s the secret behind Elf?

The plot is very simple: a full-grown human who had been raised as an Elf in the North Pole goes on a quest to find his real father.

What do you look for in films like Elf?

We can all agree that we won’t be able to find Will Ferrell, (however, you can read more about him here) but what about that child-like awe in anticipation of Santa‘s arrival?

Or maybe a trip down memory lane to those cartoons we watched during our school holidays at Christmas? Or how about a story of a kid looking for his father?

It’s a glow-in-the-dark compass ring. So you don’t get lost.

Although this is not a Christmas movie, Big has all the excitement of a little kid waiting for Santa.This scene where Tom Hanks plays the piano by skipping on the keyboard has the same charm as the Santa scene in Elf.Watch Tom Hanks recreating the same moment several years later with Sandra Bullock here.In Big we have a role reversal story where Josh (David Moscow first, then Tom Hanks) is wishing he was a grown up and the next day his wish is granted. He might look like an adult on the outside, but on the inside he is still a boy.

Leaping about while working in a toy company, Josh is similar to Buddy in Elf.

It’s a Christmas tradition in my family to watch Asterix and Cleopatra. I will never tire of this cartoon, and this is my favourite scene: Cleopatra‘s bath

I chose Asterix and Cleopatra because it’s very funny and can be enjoyed by the whole family. The jokes never seem to tire or age – which is quite an achievement for a cartoon from the late 60s.

Asterix and Obelix travel to Egypt where they are supposed to help Cleopatra realise an ambitious project. Their friend, the druid Panoramix, is at hand with his magic potions to give extraordinary powers.

The “chemistry” between Asterix and Obelix – one small and smart, the other big and strong but simpler, make for great viewing as they set off on improbable adventures.

SIMILARITY MATCH: 70%
This is a funny cartoon with some hyperbolic humour like Elf.
***
‘Love Actually’ (Richard Curtis, 2003)

But you know, the thing about romance is… people only get together right at the very end.

I chose Love Actually because it featured in various lists but also because of this article from movie critic Daniel Carlson:

“It made me realise that Love Actually has its merits as a Christmas movie – it may not have all the laugh-out-loud comedy elements of Elf, but some of the stories will make you smile. Coincidentally it was released at the same time as Elf.”

Out of the various storylines, probably the best one is Christmas is All Around, where Bill Nighy plays the semi-retired rockstar Billy Mack. He has to pretend he likes performing The Troggs‘ hit “Love Is All Around” with a new Christmas-themed title.

Billy has the best jokes in the film, for example, this is an exchange between Billy and TV chat show host Parkinson (Parky):

Parky: “This must be a very exciting moment for you, fighting for the Christmas Number One. How’s it looking so far?”

Billy Mack: “Very bad indeed… Blue are outselling me five to one. But I’m hoping for a late surge. And if I reach Number One, I promise to sing the song stark naked on TV on Christmas Eve.”

SIMILARITY MATCH: 60%
Let’s face it, there’s no comedy lead in Love Actually but at least Christmas is all around and there’s a few jokes here and there.
***
‘August Rush’ (Kirsten Sheridan, 2007)

But I believe in music… The way that some people believe in fairy tales.

This is a bit of a modern fairytale narrated around music. This movie should cater for people of all ages as there is an element of romance, plenty of music and a young hero who is looking for his parents.

Just like Elf who crossed the world from the North Pole in search of his father, Evan is looking for his birth parents. The poor darling was raised in an orphanage.

So far, so very quaint, almost Dickensian. But fear not, director Kirsten Sheridan managed to avoid the cliches and delivered a well-balanced film.

It may not be full of belly laughs like Elf, but August Rush follows the same theme – it’s all about the family and it’s a feel-good story.

Robin Williams is quite good in it even though he has only a small part.

You won’t be disappointed.

SIMILARITY MATCH: 60%
OK, so there’s no slapstick here and no Will Ferrell but just like Elf there’s a son’s quest to find his father.
***

Christmas Is All Around

Did you get all caught up in all that Christmas excitement? We must admit that finding good movies to watch can be tricky, and Christmas movies can all be quite similar. If you are a fan of Elf, it’s even more difficult to find more movies you will love.

What do you think of these Christmassy choices?

Would you have chosen something different?

Feel free to add more suggestions in the comments.