I Wanna Be Anarchy! Books like The Anarchist Cookbook If you think I’m going to be recommending books that explain how to make Molotov cocktails and the like, think again. Instead, I’ll be introducing you to books with protagonists who believe in bettering the world through their own visions of anarchy, such as Junk (Melvin Burgess, 1996), Hell’s Angels: The Strange and Terrible Saga of the Outlaw Motorcycle Gangs (Hunter S. Thompson, 1966) and A Clock Work Orange (Anthony Burgess, 1962) ~ Roxanne Sancto

The FBI called The Anarchist Cookbook “one of the crudest, low-brow, paranoiac writing efforts ever attempted”.Filled with various how-to manuals aiding you in brewing your own LSD, making your own weapons and even hacking into phone systems, it is far from surprising that it was on the government’s shit-list.

Written by William Powell in 1971, it was his big fuck you to the US government and its involvement in the Vietnam War. It was taken out of print in 1991 when the original publisher Lyle Stuart sold his company to Steven Schragis who decided to drop it.

In 2013 Delta Press bought the copy rights and it has been available again ever since.

In the meantime, Powell – now a converted Anglican Christian – made it his mission to remove the book from circulation and dedicated various websites to emphasizing that he no longer advocates what was written in the Cookbook.

If you’d like to get a feel of other books like The Anarchist Cookbook sans unreliable recipes, here are a few that promote free thinking and escaping the system! 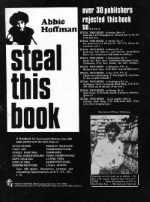 A list of books similar to The Anarchist Cookbook should definitely include Abbie Hoffman’s Steal This Book.

As a prominent activist in the 60’s and 70’s, Abbie soon became known for his ideals and his chosen techniques in the fight against the government and traditional values.

The book is divided into three sections titled Survive!, Fight! and Liberate!

Each section offers advice and techniques on how to prepare yourself for violent demonstrations, how to survive on the run, how to set up guerrilla radio, press and TV and how to best grow your cannabis.

In this book, America is referred to as the “Pig Empire” and Hoffman makes a stand by saying that it would be immoral not to steal from the state.

The books’ index lists a variety of approved books and organisations fit for stealing.

Much like The Anarchist Cookbook, Steal This Book also offers a variety of instructions as to how to make bombs and how to help injured street fighters.

Hoffman was forced to set up his own publishing company after more than 30 publishing houses rejected it.

It spread mainly through word of mouth and became the book of the Woodstock generation. 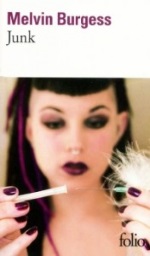 I really, really love this book.

Yes it is sad and tragic, but I could really see the characters Gemma and Tar and I could really feel their thoughts, their sentiments and their worries. Melvin Burgess outdid himself with Junk.

Set in Bristol, it introduces us to Richard, a vegan anarchist who hates cigarettes and takes in the gentle teenager Tar, who has run away from home trying to escape his father’s abuse. Richard lives in a squat with his friends Vonny and Jerry.

Richard organises “stick ups” on a regular basis. Together with Tar, his girlfriend Gemma, Vonny and Jerry, they glue the locks of the banks, leaving behind humorous stickers reading things like:

“YOU HAVE BEEN LOCKED OUT
COURTESY OF LOCKTITE SUPERGLUE
(ANARCHY IN THE UK, INC)”

While Tar feels a close connection to Richard and his philosophy, Gemma grows bored of him and insists in finding her own source of fun. Unfortunately for all, she finds it in heroin and Tar soon follows suit.

SIMILARITY MATCH: 40%
A bit of harmless, non-violent anarchy in the UK!
***
‘Hell’s Angels: The Strange and Terrible Saga of the Outlaw Motorcycle Gangs’ (Hunter S. Thompson, 1966) 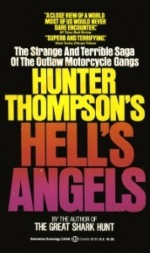 Trust Hunter S. Thompson to get himself wrapped up with the Hell’s Angels! If ever there was a ballsy journalist who knew how to adapt to his surroundings in a chameleon-like manner, it was Hunter.

Are you a fan of the FX show Sons of Anarchy? If your answer is a roaring yes, then I can almost guarantee that Hell’s Angels: The Strange and Terrible Saga of the Outlaw Motorcycle Gangs will tickle your leathers.

Unlike other journalists who would have approached the assignment of writing about the notorious motorcycle gang undercover, Hunter was straight with them from the beginning. He spent a year living with them and all in all it was quite peaceful….

…until Hunter got a beating after having stated: “Only a punk beats his wife”, upon hearing about “Junkie George” and his wife-beating tendencies. 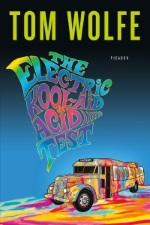 Think back to the US rebels of the sixties – What’s the first name to come to mind? Yes of course; Ken Kesey. He was the man behind the Acid Test movement, the man who encouraged a generation to open new doors of perception, much like Timothy Leary.

These infamous acid parties involved music by bands like the Grateful Dead, fluorescent paint and all things psychedelic.

They were briefly described in Thompson’s Hell’s Angel Saga and in Frank Reynolds’ Freewheelin Frank, Secretary of the Hell’s Angels, but no one painted a picture quite as accurate as Tom Wolfe in The Electric Kool-Aid Acid Test.

Ken Kesey’s contagious energy mesmerised a generation; wherever Kesey would lead Furthur and his band of Merry Pranksters, his “congregation” would follow in pursuit of transcendent states.

While the hippie movement encouraged communal living, harmony with nature and experimenting with recreational drugs might be viewed as an anarchistic movement in its own right – in other words moving away from society’s norms and embracing new notion of togetherness as opposed to Us Vs Them. 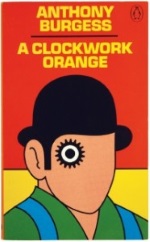 If you’re looking for similar books to the Anarchist Cookbook , ones that speak of a strong hatred towards the government and a keen taste for violence, A Clockwork Orange could definitely be of interest.

Set in a futuristic London, it details Alex ‘and his “droogs” pursuit of ultra-violence.

Their whole existence seems to rely on crass beatings, rape and break ins; the law and the police are not threatening to them in the least.

When one of their mission goes terribly wrong, Alex finds himself sentenced to fourteen years in prison and is forced to undergo an experimental behaviour-modification technique that causes him to vomit every time he thinks of sex and violence.

But will that stop his lust for hearing bones crack beneath his knuckles?

SIMILARITY MATCH: 20%
A ultra-violent collective going beyond the principles of anarchism.
***

If you felt inspired by the books mentioned above, you should also check out Jerry Rubin and his book Do It!: Scenarios of the Revolution (1970).Rubin once ran for mayor of Berkeley and stood against the Vietnam War and for black power and the legalization of pot. He earned a whooping 20% of the vote!

Abbie Hoffman also offers further reading material in the form of Revolution for the Hell of it: The Book That Earned Abbie Hoffman a Five-Year Prison Term at the Chicago Conspiracy Trial and The Autobiography of Abbie Hoffman, detailing some of his craziest stunts and his most memorable actions.

And last but not least, for a bit of everything you can turn to Kyle Bravo’s Making Stuff and Doing Things Book, which will give you illustrated instructions on how to juggle, fix a toilet, repair your shoes and live a liberated lifestyle…and much, MUCH more!! Who the fuck needs the system anyway? It’s all about the DIY, baby!

Which book helped you escape the system?Give us a shout in the comments below.