A good few Studio Ghibli movies are based on books, but surely there’s more reading material that captures the same feeling? Books like Tom’s Midnight Garden and A Wrinkle in Time are every bit as thought-provoking and enchanting. ~ Jane Howarth

There are some addictive magical books out there, but somehow Hayao Miyazaki and co always spin a beautifully crafted magic web – even their down-to-earth movies share that very particular feeling.

Whether you’d love nothing more than your own Soot Sprite, you’re blown away by the details or you love their themes, you should find what you’re looking for in these books like Studio Ghibli movies. 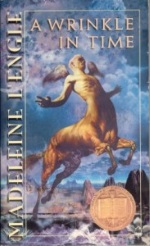 Meg Murry’s scientist father goes missing, and her witch-like neighbour is the only one with any leads – with the help of her brother and their friend, Meg ventures across time and space to solve the mystery.

I always thought this book was a little strange, but that’s why I like it.

Like many of the studio’s movies, A Wrinkle in Time is initially grounded in everyday life, but its shift to the world of witches and travel across space puts it in the realms of Howl’s Moving Castle (Hayao Miyazaki).

Howl fans will enjoy the combination of grounded responsibilities, fantastical journeys and witches that aren’t all they seem. 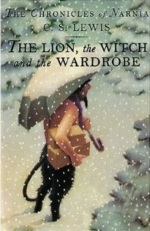 Like Tales of Earthsea, Narnia is the saga of a quasi-historical world that’s in some ways very similar to our own, but in others very (very) different. Find my field guide to the Chronicles of Narnia, and start your journey.

In The Lion, the Witch and the Wardrobe the children must complete a quest in a strange land, finding themselves with new duties and making moral decisions to fit the unusual circumstances.

So far, so Ghibli.

But it’s not just the content – this book is full of detailed illustrations which fans of the famously skilled animation studio will love. Even as an adult, I find myself turning back for another look at my favourites. 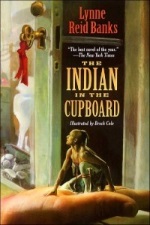 If you loved The Secret World of Arrietty (Hiromasa Yonebayashi, 2010) and the book it’s based on, The Borrowers (Mary Norton, 1952), this children’s story will make a great addition to your collection.

Omri is given a miniature Iroquois brave figurine, and puts it away safely in his cupboard.  The next day, the toy is inhabited by the spirit of a real 19th Century person, leading to all kinds of practical and moral problems.  Can you keep a living person in a cupboard, however tiny?

The Indian in the Cupboard is the first book of a five-part series, and while opinion’s split on stereotypes (the title, for a start), my own feeling is that just like the magic cupboard, Banks takes stock characters and figurines and transforms them into a form of living people.

A timeless feel and fantasy-within-reality story, coupled with a host of moral dilemmas, make this a great choice for Arrietty and Whisper of the Heart fans. 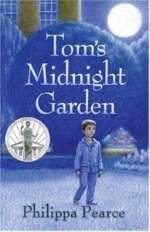 Tom is sent to live with his aunt in her flat within a large, old house. At night, he wakes to hear the clock strike thirteen. He steps outside and finds himself in a Victorian garden, where he meets Hetty, a girl of the same age.

Midnight time travel excepted, it’s a more down to earth story that shares themes with Whisper of the Heart (Yoshifumi Kondō, 1995) and Howl’s Moving Castle.

A charming story of enchanted places and friendship across time makes Tom’s Midnight Garden reminiscent of Whisper of the Heart. 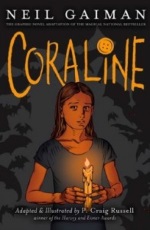 Paola recommends the movie adaptation as a gothic Alice in Wonderland substitute, and I think that’s a pretty great description for the book too.

In Neil Gaiman’s novella, Coraline and her parents move to a mansion that’s been divided into flats. She just can’t resist the lure of a door to nowhere, though. The eccentric neighbour’s mice insist she mustn’t open it, so we can guess what happens next…

And if you like Studio Ghibli’s spirit world-based movies, you’ll know that parents can turn into pigs – why shouldn’t a button-eyed alternate family live behind a door to nowhere?

Spirited Away (Hayao Miyazaki, 2001) devotees will love this tale of other mothers and worlds behind walls. 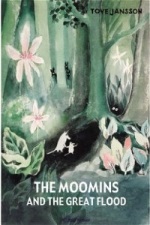 Looking for cute, thoughtful creatures like the big and small Totoros from My Neighbor Totoro (Hayao Miyazaki, 1988)? Meet the Moomins.

Here’s a quick introduction to the books. In this novel, the first instalment of the series, Moomintroll and Moominmamma search for Moominpappa, encountering foreign lands and strange creatures along the way.

You might have read my thoughts on Ghibli’s cutest characters – if so, you’ll know fuzziness is very important, but ambiguity’s pretty important too. Here, you’ll find more of those characters that aren’t good or bad, they just are.

With their hippo-like appearance and philosophical side, the Moomins are similar to Ghibli’s creatures, though the overall message feels different.

The studio is famous for stunning animation, but many of its films deal with tough situations.  Island of the Blue Dolphins and The Book Thief do the same. 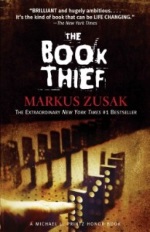 The Wind Rises (Hayao Miyazaki, 2013) and Grave of the Fireflies (Isao Takahata, 1988) put a fictional spin on the real experiences of a wartime fighter plane designer and an author who grew up under the bombs of WWII.

For a similar theme, try The Book Thief.

With its creative way of approaching an era we all know a little about, it adds a similar fantasy feel while capturing the horrors of the time.

If you’ve already discovered Zusak’s novel, you can find some of my recommendations for books like it right here.

Like the studio’s wartime-set movies, The Book Thief tells a nation’s heartache through a personal story.

Image source: According to Ellen 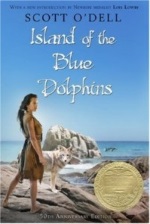 In Scott O’Dell’s reimagining of a true story for younger readers, Karana’s tribe is relocated to the mainland following a dispute with fur traders. As the ship boards, she realises her brother is still on the soon to be abandoned island, goes back to save him and both are left behind.

She befriends a wolf, finds ways to survive the island’s natural dangers and learns to be completely independent – traits shared by heroines like Kiki and Chihiro.

As an eight year old, I borrowed this book countless times from my local library. Anyone who was constantly waiting for it, I can only apologise, but despite the bleak concept, it’s a fascinating read that’s full of captivating detail.

Karana’s sense of responsibility and the book’s affinity for nature are fitting, but the island setting is more isolated than you’d expect from some Ghibli favourites.

Isn’t it amazing how two completely different stories can send you to the same place? Well, I don’t know about you, but when I watch one of their movies, it puts me in a particular mood – sometimes I just want to capture that same feeling in another way.

But if you’re not in the mood for a book after, I’ve got you covered too. You’ll find my selections right here.

Any More Fans Out There?

I know you’re out there, and I bet you’ve got a few ideas.

So, tell us which pages you open when the credits roll.

Which Ghibli movies remind you of a book, and vice versa?