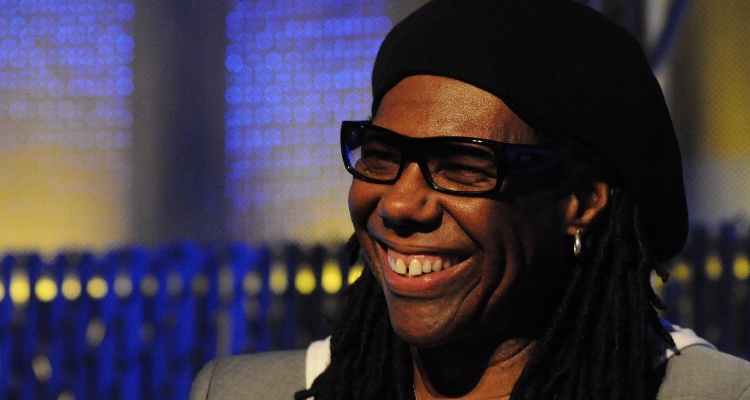 Nile Rodgers is one of the founding members of CHIC, the 70s disco band responsible for unforgettable songs like Good Times,  Le Freak and Everybody Dance. With a career spanning almost 40 years (and counting) it is a challenge to choose the best Nile Rodgers songs.

If you have seen Nile Rodgers and CHIC at Glastonbury 2013 you would have noticed that his music career as a producer has been extremely influential.

Nile Rodgers top songs performed at Glastonbury included CHIC classics like Everybody Dance, Dance Dance Dance, I Want Your Love, and top ten songs produced by Nile Rodgers like Diana Ross‘ hits I’m Coming Out and Upside Down, Sister Sledge‘s Greatest Dancer and We Are Family and Madonna‘s Like A Virgin.

He is constantly releasing new music including collaborations with artists like Pharrell, Daft Punk, Avicii and Disclosure

He must be the most connected man in the music industry and his address book must be the envy of many emerging musicians.

Not only he has worked with music heavyweights like Madonna and David Bowie but he is constantly releasing new music including collaborations with artists like Pharrell, Daft Punk, Avicii and Disclosure.

During the 70s Nile Rodgers worked mainly with CHIC and released three albums.

He also produced He’s The Greatest Dancer by Sister Sledge in 1979.

His Successes During the 80s

In the 80s the amount of collaborations started a meteoric rise.

The amount of collaborations started a meteoric rise

Does the guitar riff in the INXS‘ Original Sin sound vaguely familiar?

Yes, that was Nile playing.

Nile Rodgers, the man with the Midas touch, who named his guitar “the hit maker”

Madonna’s career went galactic when she released Like a Virgin, produced by Nile, the man with the Midas touch, who named his guitar “the hit maker”.

Duran Duran found new fame after splitting up to pursue different projects with Notorius, produced once again by Nile.

What About the 90s and After?

During the 90s the number of releases was much lower – he was involved with various projects including producing for David Bowie and issuing a new CHIC album.

In the early 2000s and 2010s Nile Rodgers worked on other projects like movie soundtracks and from 2013 he started producing hit songs again including the extremely popular Get Lucky with  Daft Punk and Pharrell.

Your Best Guess for the Coming Years?

I wonder what’s next for the busiest man in music…

Shall we speculate on whom he will collaborating with?