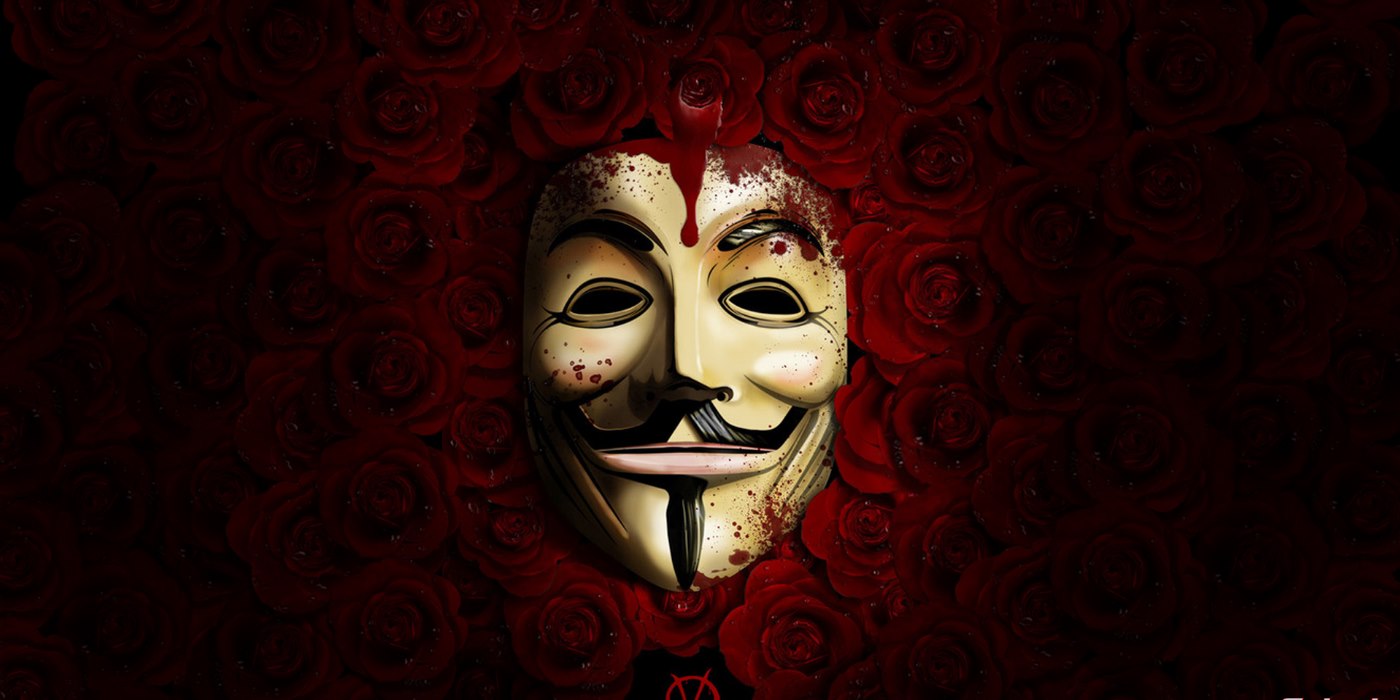 ‘V for Vendetta’, adapted from a graphic novel, is a great story of vengeance against a backdrop of political corruption. For films involving one or more of these themes, check out ‘1984’, ‘Sin City’, or ‘Oldboy’. ~ Jonny Sweet

Surprisingly, one of the co-creators of the graphic novel, Alan Moore, was apparently disillusioned with previous adaptations of his work and disappointed with the script of this film, and so chose to distance himself from it. In my opinion, however, the movie does great justice to the source material.

All of the cast performances are strong and though the ending is fairly far-fetched, it has enough realism about it to remain engaging throughout.

Presumably, you thought the same and that’s why you’re reading this article; to find out which are the best movies like ‘V for Vendetta’, scroll down!

Movies Similar to ‘V for Vendetta’…

There’s something very Orwellian about the world in which ‘V’ and ‘Evey’ live, and the debt it owes to ‘Nineteen Eighty-Four’ is given a not-so-subtle nod by casting John Hurt, the protagonist of Radford’s film, in a diametrically-opposed role in ‘V’.

High Chancellor, Adam Sutler, in ‘V’, dished out all of the punishments from his position of tyrannical authority, but just over twenty years earlier, Hurt portrayed Winston Smith, the victim of similar punishments.

‘Nineteen Eighty-Four’ is absolutely one of the most important movies to watch if you like ‘V for Vendetta’, if only to understand it better by experiencing its single greatest influence.

SIMILARITY MATCH: 75%
‘Nineteen Eighty-Four’ is the inspiration and idea from which ‘V for Vendetta’ sprang – and it shows.
***
‘Sin City’ (Frank Miller, Robert Rodriguez & Quentin Tarantino, 2005)

Despite what Alan Moore thinks, I believe ‘V’ to be a great adaptation of a graphic novel… but not the best one.

For me, that accolade goes to ‘Sin City’, which is also set in a dystopian city; though the characters and storyline in ‘Sin City’ are quite a lot more fantastical and far-fetched, they’re nonetheless entertaining for being so.

It’s also incredibly stylish in its use of colour; apart from red and yellow, the entire picture appears in black and white.

SIMILARITY MATCH: 60%
‘V for Vendetta’ is about a corrupt state where politicians and the police terrorise the proletariat; in ‘Sin City’, the government has completely lost control and all sorts of unhinged individuals are free to run amok, though both are stylish graphic novel adaptations.
***
‘Oldboy’ (Chan-wook Park, 2003)

A classic tale of vengeance told with an incredible amount of twists, ‘Oldboy’ is definitely among my favourite films of all time, for its innovation, uniqueness, and ability to surprise.

After being imprisoned in a hotel room for 15 years, the protagonist races to identify his captor and the reason for his incarceration, all before his daughter is killed. Doesn’t make much sense?

Don’t worry. It gets even more confusing.

An exploration of vengeance in all its form, ‘Oldboy’ delivers plot feints, grotesque images, and simply the best fight scene I’ve ever seen!

SIMILARITY MATCH: 55%
Both ‘V for Vendetta’ and ‘Oldboy’ are classic revenge stories with unusual twists and delivered in a stylish manner – though they cover very different subject matters.
***
‘Drive’ (Nicolas Winding Refn, 2011)

A reticent and mysterious mechanic who moonlights as a getaway driver becomes embroiled in a complicated tale of vengeance in his efforts to protect a young mother and her son.

Ryan Gosling gives a typically charismatic performance as the main character, while Bryan Cranston, Carey Mulligan and Ron Perlman all deliver as well.

Revenge never looked so stylish… or so 80s.

SIMILARITY MATCH: 55%
Both the protagonists in ‘Drive’ and ‘V for Vendetta’ are driven by a pursuit of vengeance, though in very different eras, settings, and circumstances.
***
‘Minority Report’ (Steven Spielberg, 2002)

The future is once again dystopified here as a society which attempts to prevent crime by apprehending the perpetrators before they commit crimes.

The use of “Pre-cogs”, or humans gifted with special clairvoyant powers, has seemingly been infallible in its detection and prevention of crime, but when of the Precrime squad’s own member is accused, he desperately searches for the “minority report” or variation of the prediction which could prove his innocence and save his life.

It’s Spielberg and Tom Cruise, so expect all the usual fireworks (and Hollywood sheen) which go with that… but for those for whom that is a bad thing, fear not! It retains enough originality to be thoroughly entertaining throughout.

SIMILARITY MATCH: 55%
Both ‘V for Vendetta’ and ‘Minority Report’ are dystopian visions of the future when the police have too much power, though, whereas the former concentrates on tyranny, the latter looks at the dangers of advances in technology.
***

Sometimes the Need for Revenge Is Insatiable

Since sometimes the urge to get revenge can only be satisfied by a whole marathon of vengeance stories, here are some more suggestions for you, carefully selected by other itcher team members.

A fromer assasin falls into a coma after her ex-boyfriend tries to kill her at her wedding. Waking up 4 years after the incident, she seeks revenge.

In a futuristic world in which emotions are forbidden, an agent responsible for making sure that nobody has any kind of feelings suddenly becomes the one who wants to overthrow the regime.

In a future alternate world, everyone is put into categories depending on their DNA, making some people superior and others inferior.

A man suffering from total amnesia wants to find out more about his past after realising he has some exceptional talents.

What Are Some Good Movies Like ‘V for Vendetta’ That I Haven’t Mentioned?

The floor is yours, folks… I’ve had my say, now you have yours in the comments section. I’d love to hear your input!

If you can use a lot of words being with V, I’ll be doubly impressed.