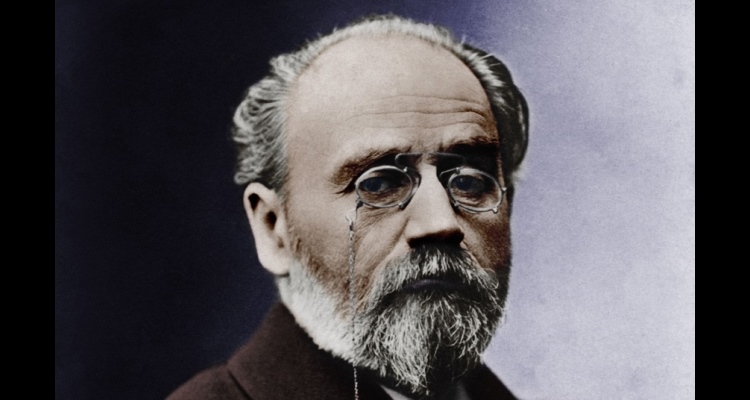 Class turmoil, poverty and personal conflicts – what’s really happening in the Therese Raquin, Germinal and The Ladies’ Paradise?  They’re three of the best books by Emile Zola, and each will show you something new. ~ Jane Howarth

What will I Find in a Zola Novel?

Zola was a fierce defender of the working classes, who suffered horribly in mid-19th Century France.The best Emile Zola works are the ones that set brutally honest portraits of working class life against descriptions you can practically reach out and touch.

But that covers a lot of ground, so I’ve narrowed it down to three.

If you’re a visual person, or you put a lot of value on atmosphere, you’ll get right into these books without even trying.

“On fair days when the sun burns down heavily on the streets, a whitish light penetrates the dirty panes of glass and lurks miserably about the arcade.”

The characters aren’t likeable, but you can’t help but get drawn to see where their passion and desperation takes them.

One of the writers first books, 27-year-old Zola did everything he could to infuse it with reality, with the hardships he was seeing in his own city.

Its violent undertones and sexual implications made the novel a critical disaster, but he stood by it.

His only amendment to the second edition?  A detailed justification where calls out his contemporaries for being such wusses.

“Blow the candle out, I don’t need to see what my thoughts look like.”

Germinal is the go-to masterpiece of Emile Zola’s writing career.

Where Therese Racquin tried to put a true to life spin on the narrative, Germinal irons those issues down to a traditional novel-style work of fiction.

Zola wrote 35 books throughout his lifetime, twenty of which are part of one saga, Les Rougon-Macquart.

The thirteenth book in the series is set around coal miners’ descent to revolutionary action in the north. The mine itself is like a character, a demon rising out of the ground.

“Pale satins and soft silks were gushing out… the damasks, the brocades, the silver and gold silks, were sleeping on a deep bed of velvets’.”

Did you catch the BBC TV show The Paradise (David Drury, 2012)? It was loosely based on this book, though don’t expect so much cosiness in the original.

The eleventh Les Rougon-Macquart book is not a typical Zola work – it’s a little lighter (just a little). And then there’s the lush setting.

Many of the characters and events – the shop’s progress, the deals, even the upper classes – directly inspired by Parisian history.

These are my Emile Zola Best Books – What are yours?

If I had to choose just one book, it would be the Parisian The Ladies’ Paradise.I can picture it all happening on those famous streets of the French capital as modernity (and accessible beautiful things) steamrollers its way in and wipes out the past.

But then, I love thinking about the hidden things under our feet, so perhaps I’m adding my own take to this one.

Which Emile Zola book would you recommend and why does it captures your attention?