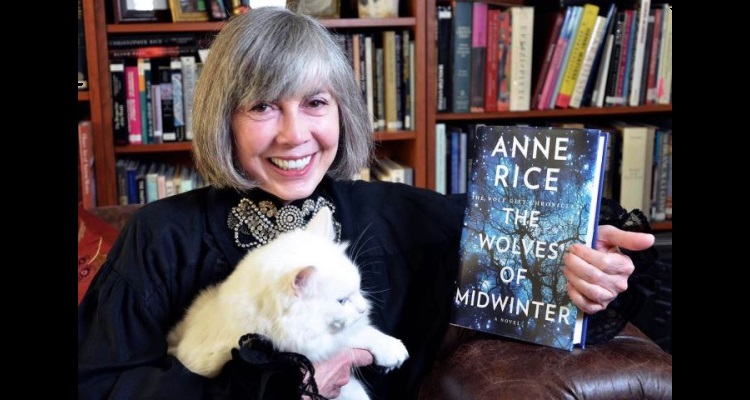 Where would Twilight be without Anne Rice? Nowhere. Though she’s most famed for her fanged anti-heroes, they aren’t all she writes about.Just saying ‘Anne Rice’ is almost like saying ‘vampire.’ She’s one of the strongest influences on modern writers of the bloodthirsty undead. Next to Stoker, that is.

People forget some of the best books by Anne Rice are about many different supernatural beings.

She’s recently written about werewolves (The Wolf Gift Chronicles), but before that she wrote a series on witches; a ghost story; and a mummy novel.

So, what are the Best Anne Rice Books that don’t Involve Vampires?

“And all the wonders of this brave new century should draw me from my grief and yet I cannot heal my heart; and so the mind suffers; the mind closes as if it were a flower without sun.”

A love story unravels (pun intended) between a pharaoh and an archaeologist’s daughter, with a lot of creepy in-between.

The interesting thing about mummies: they thrive in sunlight, falter in shadows. They’re kind of the opposite of vampires. The best books of Anne Rice tend to go away from the traditional monsters.

It’s 1914. Lawrence Stratford exhumes the tomb of Ramses II and happens to die mysteriously after. The tomb and mummy are sent to London, where his daughter Julie Stratford becomes involved.

Ramses II reanimates, connects with Julie and he starts facing his past. He became an immortal after drinking an elixir, although he couldn’t save the woman he loved (Cleopatra).

When Cleopatra comes to, she’s not fully herself in all ways and she goes on a bloody rampage. The now ‘Reginald Ramsey’ and Julie try to stop her.

“Laughter flows in a violent riff and is effortlessly melodic. Weeping is often fought, choked, half strangled, or surrendered to with humiliation.”

There is a delicacy to this ghostly novel that’s unusual, which is why it’s one of the top Anne Rice books. Many of you may disagree with me on this choice, which is fine.

The reason I chose it: I found it melodic, melancholy and expressive of grief.

Triana Becker is a 50-something woman with an unfulfilled wish: to play the violin like a master. This stems from her love of music and her pain of loss– as if she wants to purge her grief through violin music.

A random* violinist starts playing beneath her window. Triana becomes entranced/obsessed with the emotions he evokes.

Finally, she manages to steal the violin from Stefan Stefanovsky, the player. A ghost.

Stefan can’t find peace without his violin; Triana won’t give it up until she finds peace.

His talent is intertwined with the violin, and Triana becomes an aficionado. Stefan gets revenge for her theft by taking her to the realm of ghosts, where she sees his history– and her own.

“We have such a terrible, terrible misconception of science. We think it involves the definite, the precise, the known; it is a horrid series of gates to an unknown as vast as the universe; which means endless. And I knew this, I knew but I forgot. That was my mistake.”

2nd in the The Mayfair Witches series, Lasher is overtly disturbing on many levels. Not a book for the squeamish. A creature having sex with its mother is just one of the themes that occur.

Rowan Mayfair is a newlywed; she’s run away; and she’s also one in a long line of witches. She has had a Taltos (ancient creature with a connection to witches) named Lasher and they disappear/travel together.

Lasher manages to get her pregnant several times; it’s only the last time she remains pregnant.

Rowan’s terrified of him, but still manages to get some samples from him sent out to a lab to find out what he is. The answer? Completely unknown.

She escapes to go back to her husband after giving birth to a female Taltos, Emaleth. That’s when it gets gory. Er.

What are your Favorite non-Vamp Anne Rice Books?