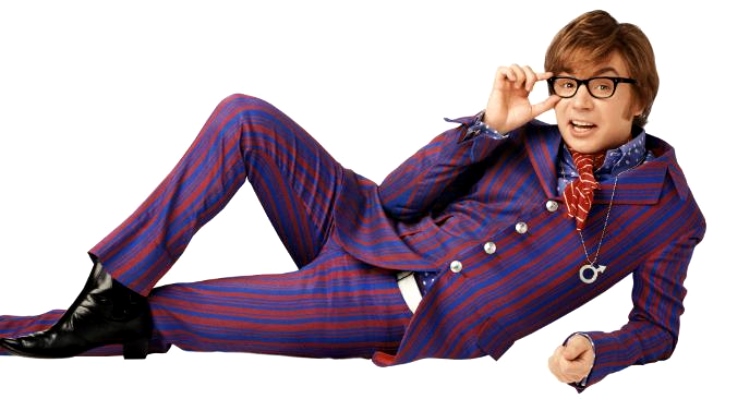 If you are having a bad day, nothing beats a funny movie to cheer you up (more on that in Feel Good Movies). The Austin Powers “trilogy” is a pure joy to watch.

Austin Powers movies may not be clever (well, apart from the hidden movie geek references from Singin’ in the Rain to James Bond The Spy Who Loved Me) but they all are hilariously funny.

From the first movie Austin Powers: International Man of Mystery (1997) to Austin Powers: The Spy Who Shagged Me (1999) and Austin Powers in Goldmember (2002), the combination of slapstick, puns and extravagant dance routines will make you smile.

I have chosen the best Austin Powers scenes for your entertainment and viewing pleasure.

This is Austin Powers‘ most used catchphrase. Here’s one example:

Well, the catchphrase is actually in Japanese… If you watch the video you’ll understand where the pun is:

In the scene Austin gets some translation help from his sidekick played by Beyonce. The humour is all in the subtitles and in the props.

They start talking in code aka cockney rhyming slang and it’s very funny to watch. It is also quite clear how Mike Myers took inspiration from Michael Caine in Alfie (1966) – the serial womaniser.

Hey why not try slipping a “zip it” in conversation next time someone is talking too much? See if they understand your reference to Austin Powers!

There’s breakdancing, and there’s twerking too!

Just the two of us

Another Dr Evil/Minime pairing performing a rap over Just the Two of Us. Hilarious dance routine too!

Austin Powers got married and takes a video call from his boss… during his honeymoon! Hotel room props are placed strategically over Austin‘s and his wife’s (played by Elizabeth Hurley) “naughty bits”.

Get in my Belly!

Mike Myers plays Fat Bastard, one of Dr Evil‘s partners in crime. When he shouts “get in my belly!” in a rather credible Scottish accent I dare you not to laugh. I actually use the expression “get in my belly” myself when I’m hungry!

The “Laser” is always referred to by Dr Evil in inverted commas. It’s one of the catchphrases and it makes me laugh every time.

Austin Powers really can’t help himself… when he sees the mole.

And when it all gets too much… Austin makes a guacamole out of the mole!

Is that a Mole in your Guacamole or are you Just Pleased to See me?

Is the mole scene the funniest Austin Powers moment in the series in your opinion? I guess we all have our favourite scenes, what’s yours? If I had to pick just one scene out.