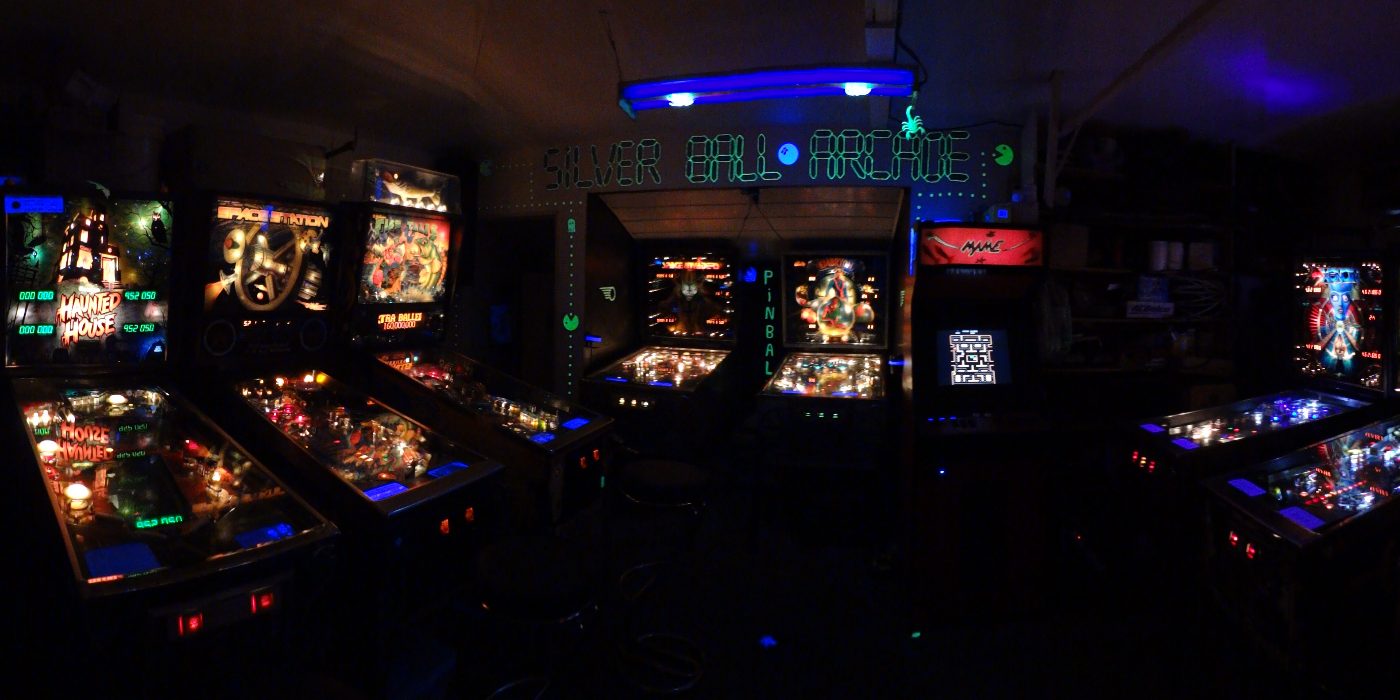 Paola Bassanese, arcade lover and a contributor for itcher magazine.

Zoey Hughes, games lover and a contributor for itcher magazine.
***

Hi, I’m Paola and I have been writing for itcher magazine since the end of 2013. I am not an expert on videogames but I do write about books, movies and music. Back in the day I played my fair share of arcade games, and here’s my memories from those times.

Hi, I’m Zoey, video games writer for itcher. I never really got the arcade thing. Maybe I was just born too late but my allegiances lie strongly with the home console.

I remember going to the games arcades in the 80s (in Italy) and in the 90s (in the UK).Yes, sure, the early videogames were very basic and they can’t compare to modern ones.

I guess it was the whole gaming experience that was different.

Pac-Man was the king of the arcade games when I was a teenager. I remember the thrill of being chased by the ghost while trying to make the most of the time you had left from buying one credit. 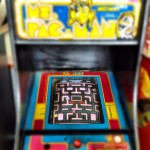 The gaming experience was communal: you would go to the arcade with your mates. Sometimes you would take turns on the same machine, so your friends would cheer you on while you played. Some other times you would split and play at different machines and re-group afterwards to share stories.

As a teenager, being allowed to go out in the evening to the arcade was a major achievement: for us kids it was one step away from being recognised as a grown up! The social element of the arcade was huge: we would go as a group and we were a messy soup of raging hormones, making the arcade a great place for mingling (and snogging). Now I sound like my mother when she was telling me about going to tea dances in the 60s…

It is not just me who feels nostalgic for arcade games: in Cambridge, arcade games fans lobbied to restore some vintage machines at the UK Computer Museum.

ZOEY: I think in the 80s the arcade scene did have a certain rebellious teenage feel to it. I think if you tried to sneak out to go to the arcades then it was really cool but now people wouldn’t understand at all. After all, I think most teenagers these days have at least one console in their bedroom, and an internet connection to boot so they can talk to their friends from the comfort of their bed.

In the 90s, I loved going to Trocadero entertainment centre in London and playThe House of the DeadThe machine came with its own gun and you had to fire it at zombies coming at you.

It’s funny how I don’t like horror films but I did spend quite a few evenings shooting zombies experiencing a mixture of adrenaline, panic and relief. I guess I had a few nasty colleagues or bosses I wanted to vent my frustration to and this was the best next thing to let it all out!

Actually, thinking of it, I used to get the same release of endorphins from playing this game as going to kick boxing class! 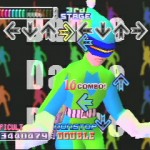 While playing against zombies was more of a solitary experience, which makes me a saddo thinking of it, Dance Dance Revolution provided plenty of laughter on nights out with friends. We would challenge each other in several dance offs but we were probably too tipsy to win against the machine! Those were the days.

Zoey, I think this is probably one of the best games to enjoy at home too – getting a bunch of friends together, a few drinks, and dance your socks off.

With videogames becoming available on the internet and on mobiles, I played a few games like Zuma or Tetris, but gave up shortly afterwards. Mobile gaming just isn’t much fun for me.

PAOLA: I haven’t been playing videogames for a few years now and don’t miss it, but I wouldn’t say no to going to an arcade every so often and trying a new game. Zoey, I’m all ears for your recommendations!

ZOEY: Now I know there’s no hope for you becoming a full-fledged gamer. I adore Zuma and the like, and often play them when I need a less intense game for a few minutes. They’re fundamentally great games. Still I have faith that if we got you round for some karaoke games, some dance games and some retro shooters you’d soon rediscover that arcade spark you once had.

It’s not the Games that are the Problem…

You may think I shunned the arcades because of the style of game but that’s not the case at all. I’ve played many arcade games when they’ve been ported to consoles; 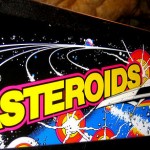 I’ve played arcade classics as far back as Robotronand on my first console, the ZX Spectrum, I spent many a happy hour playing Asteroids and other old school classics.

So What is it?Chances are if it was as good as you remember you can now download any arcade title of your choosing and play it at home, without the added hassle of trying to keep a heap of change in your pocket.

There are a couple of reasons why arcades never worked for me.

Firstly there’s the whole taking turns thing that is inevitable whenever you try to play a game in a public place. Maybe it’s because I was raised as an only child but I never had to share my games and enjoyed nothing more than a few hours of uninterrupted gaming, either solo or co-op.

Secondly there’s the audience. The prying eyes of both friend and random stranger alike, judging your skills, backseat gaming and inevitably making you feel like you’re doing it wrong. There’s always going to be some kid who’s beaten the whole game, and there’s always going to be a friends who’s played a game more than you and the whole thing just makes me feel like I’m being examined in case I do something inadequate.

PAOLA: that’s a very interesting insight, Zoey. I never thought of that. You see, the arcade experience for me at the time was the only option available and having one sister meant that we always fought over who would play a game (I would throw a hissy fit if I didn’t get my own way!).

I prefer having time limitations when playing videogames – I guess it’s the massage therapist in me who is very concerned about posture and avoiding eye strain. The time ticking off to me added to the gaming experience – more adrenaline! I didn’t mind people watching me either – I actually don’t remember other people interfering with my gaming experience too much.

What’s so Great about Home Consoles?

Unlike a lot of people I don’t really embrace the social side of gaming. I have heaps of friends who are gamers and yet I hardly ever play multiplayer, and I rarely play in front of people other than my husband. For me gaming is a private escape best suited to solo experiences and some friendly co-op.

Home consoles revolutionised the gaming industry and there’s a list a mile long of why they’re great but for me it’s all about convenience. I work from home, I make my own schedule and for me that means dipping in and out of games all day as I check details for articles, try to remember what I thought of a game or simply need a break.

To have such a breathtakingly large collection of games from all ages and genres at my fingertips (thank you PSN/XBLA/my attic) is just amazing and if I fancy five minutes of something there’s no waiting in line or finding the machine, I just pop in the game and play.

There’s no waiting in line or finding the machine, I just pop in the game and play…

I have spent days in arcades, mainly the Trocadero as you’ve already mentioned Paola, as they do make for an easy days entertainment for a group of gamers. For me the points of interest are either cheesy as hell (Rambo in co-op was always a group favourite) or something OTT such as dance games and this weird bongo thing I played once. 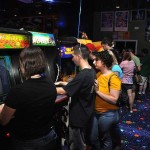 I find arcades an experience but not one I’d care to repeat very often. I always end up watching people who are epically awesome at a particular game, or inevitably abandoning the wonders of the digital age to play a humble game of air hockey.

PAOLA: fair enough! Because I am not an experienced nor a sophisticated game player, I was quite happy with the games choices at Trocadero, but I see what you mean.

There are plenty of people out there who adored the arcades and still have a soft spot for them despite owning home consoles, my husband being one of them, but for me they will remain anathema. They were a necessary evil in the early days of gaming but you’ll rarely find me anywhere near an arcade machine unless I’m killing time at an airport.

I’ll stick to my consoles in the comfort of my own home, playing the best and brightest arcade hits at my leisure, and usually with the added bonus of a save system.

However you enjoy your gaming you’ve got to agree that arcades are a good place for gamers to meet up and if arcades mean that non gamers such as you, Paola, dabble in games every now and then then I’m all for it… just don’t make me come with you.

PAOLA: mmhh you seem to be quite unmovable from your position Zoey… even the faint lure of snogging a fellow gamer at the arcade is not a tempting proposition for you because you’re married ha ha! I might need to drag you to Trocadero one day as a team outing and do a little dance-off, how about that?

It seems that Zoey and I agree to disagree. There’s merits in both arcade games (the social element) and home entertainment games (the comfort).

Who wins? Actually there’s no winners or losers here – we have discovered that people like to enjoy their gaming experience in different environments – and that’s the beauty of it.